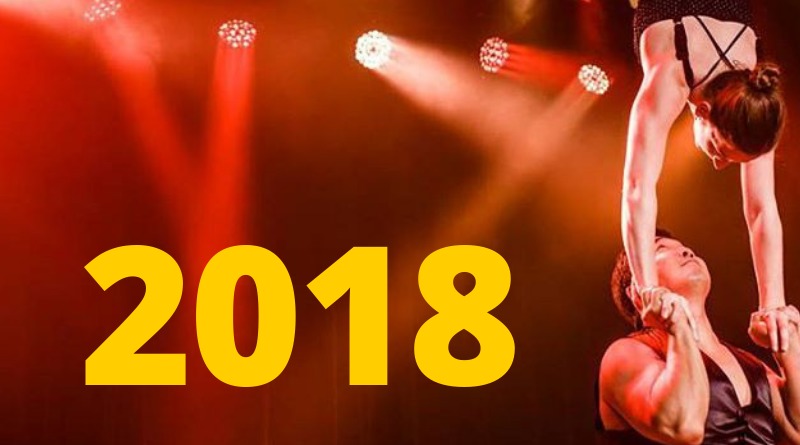 In many ways, 2018 has been a great year for circus. This is really saying something when you consider that 2017 was a year when big changes left a lot of people in the circus industry feeling discouraged–with the closing of iconic circuses like Ringling and changes in industry attitudes on subjects like large scale shows, animals and more. Of course, along with tremendous growth and in some cases reinvention, there have been growing pains and push back and that progress hasn’t always been pain free or without casualties.

The roles of animals, minorities, and women in circus; sexual misconduct; racism, and defining and validating the diversity of artistic expression in circus; these were hot topics among circus makers and conference goers in 2018.

The traditional circus world has held on dearly to the use of animals acts as an essential ingredient for the definition of circus–but not without cost as the divide between traditional and new or contemporary circus makers seems to widen partially as a result. It is rare to see circus festivals or conferences that include both worlds of circus and encourage learning and exchange between the two groups. But at the same time, behind the scenes there is constant exchange, as contemporary schools hire instructors with experience who come from a traditional perspective, and students and professional performers alike often straddle the two worlds, either out of loyalty or the need to maintain a livelihood. The truth is, this divide is arbitrary and artificial in some cultures and strictly maintained in others– while often non-existent in the eyes of the public.

Several sexual misconduct allegations this past year tore at the fabric of the community quite in parallel to what was happening elsewhere in the entertainment world and beyond. At the same time, recognition of  under-representation of minorities in circus emerged–and several  circus conferences,  movies, discussions and  workshops dwelled on solutions to all of these issues, reflecting back the exact topics societies at large seem to be facing in 2018, equality, xenophobia, racism, ableism.

But circus makers, like artists everywhere, recognize that the power for change and progress comes from action. So circus responded, in some cases  creating companies  and shows that addressed these concerns and in other ways adapting their works to accommodate people of different skin tones,  abilities, shapes, and gender identities. And so the wheel of time turns, with the new generation of circus makers questioning the decisions and focus of the old, and the more established moving forward more slowly and carefully.

Many circus communities were devastated to lose some important influencers in their world too. In 2018 the circus world lost iconic circus matriarch  Rosa Bouglione  at the age of 107 and  Tammy Wallenda the lion tamer of the Wallenda clan, as well as  Peter Gasser, charismatic head of the Gasser Swiss circus dynasty. Young professional  Raphael Cruz’s death in January rocked the contemporary circus world with the pain of loss of such a beloved collaborator and talent, just as the death of famous clown  Rob Torres did in June.

A Banner Year for Circus Anniversaries

As a welcome counter to such losses, there were some big circus anniversaries celebrated around the globe–proof positive that a small company can grow to become a prominent institution when the right attitude and environment prevails–and also proof to many that the market for circus remains strong. Having celebrated CircusTalk’s one year anniversary this past June, we are humbled and inspired by the amount of fortitude and commitment these companies have exerted over the years in order to develop and champion circus as a powerful art form in its own right.

7 Fingers celebrated its 15th anniversary with expansion (a new headquarters) and experimentation! It was a banner year for them, moving in to the new building, gaining more public funding, and opening several new shows like Passager (reviewed by CircusTalk contributor Maxime D-Pomerleau) to amp up their touring shows to four.

UniverSoul Circus took a solid approach to its 25th anniversary by upping its tour game, this year performing at the  Edinburgh Fringe as well as its usual circuit, and producing a show that both pushes the boundaries of traditional circus and blends in some pop culture, all while celebrating its success as the only African American led US touring show.

Also celebrating their 25th anniversary was Cirque Eloize, with a stylish new show Hotel  (reviewed by Rebecca Galloway) and a book to rejoice in their many chapters. After interviewing co-founder Jeannot Painchaud, CircusTalk delved deep in to Éloize’s history with 25 Moments, a photo and story retrospective.

Australia’s Circus Oz celebrated their 40th anniversary by continuing to do what it has always done, championing the causes of accessibility and diversity by spreading their message with seven touring shows;Model Citizens, Neon, Underage, Precarious, Rock Bang, Sidesault and even a collaboration with 7 Fingers onThe Fibonacci Project. Early in the year, Circus Oz artistic director Rob Tannion, described the excitement “2018 is significant milestone for Circus Oz. We’ve already kicked off with a hugeModel Citizensfour-week Sydney Festival season at Circus City in Parramatta and recently premiered a sell out season ofNEON –the gloriously gaudy and glammed up ‘80s circus cabaret at the Karralyka Centre’s Ringwood Spiegeltent. And this was just in January. We have an exciting and diverse schedule of creative projects lined up for the rest of the year.”

But the award for anniversaries goes to circus itself for celebrating it’s 250th anniversary as defined by  Philip Astley’s  influence on modern circus, weighed in on by several historians, from Steve Ward to Dominique Jando. CircusTalk collaborated with  Circus250 throughout the year to showcase the many events that unfolded in the UK and beyond including the Out There International Festival of Circus & Street Arts.

Covering circus in 2018 was truly a multimedia experience at CircusTalk that included collaborations and interviews, including this popular look at the lives of circus moms. Circus artist and CircusTalk contributor Lea Toran Jenner had the chance to interview 7 Fingers co-founder and director Gypsy Snider at Young Stage about her hopes for the future direction of circus, and Nicki Miller got to talk to Cirkus Cirkör founder and director Tilde Björfors about her work and the state of circus. We delved in to the minds of many up and coming circus artists like Lea Prinz and Vincent Bruyninckx (as part of our Act in a Moment series), and when Kirsty Bell decided to visit social circuses in Kenya, she took CircusTalk members along with her via our Day in the Circus Life Takeover on our Instagram and her video article coverage. A heartening snapshot of the healthy state of circus was delivered via our Day in the Life Instagram takovers throughout the year, as 12 festivals, two social circuses, three schools, three conferences and several shows like Gandini’s Spring & 4×4 and Cirque Éloize’s Hotel decided to give folks look in to exciting backstage and rehearsal moments.

Perhaps the best indicator of what circus was up to in 2018 were the festivals themselves, and there were many offering us that glimpse. From first time festivals like the first Ibero-American FIRCO  in Spain, St. John’s International Circus Festival in Newfoundland, Canada and Philadelphia’s  Hand to Hand Festival, to the iconic  Cirque de Demain and Festival Girona in Europe. Our contributors around the globe visited and reviewed festivals for CircusTalk, to share in the magic, from  Australia to  Japan, fromMexico to  Belgium,   Germany , theUSA, and beyond, covering festivals like Letní Letná in Prague (covered by director and clown Jesse Dryden), and Fira Tárrega in Spain, and Montréal Complètement Cirque in Canada. In these temporary spaces our correspondents uncovered not just the camaraderie of the industry, but also packed tents, filled auditoriums, professional conferences, interesting talk backs, helpful master classes, workshops, and opportunities for professional development and enrichment in circus education.

In 2019, CircusTalk plans to cover more circus news, to follow the trends, to report on festivals and conferences, to review shows, and to find professionals who will share their know-how about their area of expertise in circus. What will you do to make 2019 an exciting circus year? Whatever you do, we hope you share it with us on CircusTalk!

Artists and Talents of All Genres