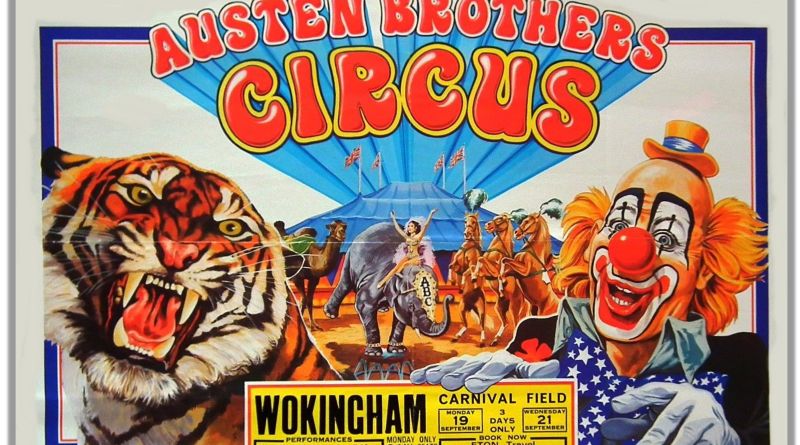 When I was about 11, a shopkeeper gave me an out-of-date circus poster of a growling lion’s head to stick on my bedroom wall — soon my room, including the ceiling, was covered in them, and more than 35 years later I have over 3,000 circus posters from all over the world, am still collecting and about to complete my fourth book based on my fascination with circus poster art. A circus poster has to work hard to get the attention of the passer-by and make them want to purchase a ticket to a show that will sometimes only be in town for a very short time — very often only one day in bygone times. To this end the excitement and marvel that each bill evokes is very often more than the show itself!

250 years ago, at Lambeth Marsh (known today as London’s Southbank) equestrian Major Philip Astley staged presentations of trick riding and horsemanship. In order to hold his audience’s attention, he introduced displays of sword play and novel features such as his wife Patty riding a horse covered in a swarm of bees. He added jugglers, acrobats, clowns and strong men to his show and the modern circus was born.

When Astley established his first ‘Amphitheatre of Equestrian Arts’, theatres and exhibition owners had already been using posters and handbills for nearly 200 years to promote their performances and shows. Astley’s posters took the typical form of these early bills, listing the featured acts  plus a number of woodcut illustrations of the lead attractions for the benefit of those unable to read. Posters greatly influenced the development of typography as such bills were required to be read from a distance thus larger, often ornate type fonts were created to generate interest (See image 1).

In the early 1800’s, Andrew Ducrow appeared as a teenager at Astley’s, eventually taking over the management of Astley’s Royal Amphitheatre in 1824. Ducrow kept many of Astley’s innovations, including the circus ring, the large number of horse-based acts and Equestrian dramas –grand complex spectacles involving elaborate costumes such as ‘Mazeppa’ and ‘The Courier of St Petersburg.’ Ducrow also began to diversify and add to the entertainments on offer, including wild animal performances in the main circus ring. Previously, wild animals were displayed or presented in separate menageries. Thus we see acts such as Van Amburgh, an American animal trainer, take top billing on early 19th Century Astley posters (See image 2).

Red Ink and Advancements in Technology

These bills featured bespoke illustrations of Van Amburgh and often used the more expensive red ink, a practice copied from large-format posters first brought to Britain by a French theatre company in 1672. There were significant advancements in poster-printing throughout the 19th Century. The iron printing press, which used etched metal plates in the place of illustrations cut into mahogany wood blocks, was invented and widely used in the 1800’s, enabling detailed illustrations to be featured on bills. The paper on which posters were printed on was, from the mid-1800’s, changed from being made from from hemp and linen rags to the better quality wood pulp. Circuses at this time were now regularly updating bills weekly (sometimes more frequently) This more basic, single colour bill on green coloured paper is one of several different designs that appeared less than a week after the red and black Amburgh bill from September 1838 (Image 3).

All About the Picture–The First Lithographs

By the turn of the 19th Century, full colour lithographic (from the Ancient Greek words lithos meaning ‘stone’, and graphein meaning ‘to write’) posters were becoming the norm. As both circus and theatre poster design took on a more pictorial approach, the old-style text/cast lists seen on posters to date, were dropped–thus smaller, often folded, programmes, sold at each performance, were required to give additional details of the shows. Circuses led the way in both the quantity and quality of lithographic poster design as the subject matter of animals and performers lent itself well to exciting poster and billboard illustrations (Image 4).

Bertram Mills Circus used an amazing quantity of posters. In 1960 alone, Bertram Mills Circus on tour, in 42 towns and cities, utilised over sixty thousand posters of varying sizes. For the London shows at Olympia up to 20 different designs were produced for each winter season and an astonishing twenty percent of the company’s expenditure was spent on poster and newspaper advertising both at Olympia and when on tour.

Typically for each Olympia and tenting season, Mills would commission an ‘All-The-Acts’ poster (See images 10-12) and a number of pictorial bills featuring the top acts (See images 13-15).As Bertram Mill’s Circus continued to flourish, all poster design and printing was provided by printers W.E.Berry of Bradford. Artists such as Leon Crossley and Berry’s own in house illustrators provided some of the best poster designs of the 20th Century — not only for Mills’ Olympia shows — right up until it’s last show in 1967, but also the touring Bertram Mills Circus, run by Bertram Mill’s sons – Cyril and Bernard, which tented from 1930 until 1965.In addition to the Mills show, W.E.Berry supplied the majority of ‘paper’ to the other British circuses including Billy Smart’s and Chipperfield’s Circuses, the other of ‘The Big 3’ as they were known.

Smart’s Circus started touring at the start of the post-war entertainment boom in 1946 and was very much influenced by the American shows — particularly Ringling Brothers and Barnum & Bailey. Billy Smart called his show a ‘New World’ Circus and the advertising was one of a spectacular and flamboyant styles. Lavish Spectacles such as the ‘Wild West Show,’ the ‘Arabian Nights Review’ and ‘Fairyland Fantasy’ were staged and featured on the posters (See images 16-17).

Chipperfield’s, on the other hand, took a more raw approach and specialised in a great number of animal acts in their shows, with the posters proclaiming the show as ‘Britain’s Own Game Reserve,’ ‘Europe’s Greatest Display of Animals’ or simply as ‘Chipperfield’s Animal Circus.’ (See images 18-19).

New circuses often used ‘stock’ poster designs – bills that were mass produced in full colour by printers and later over-printed with the show name in one or two colours – thus saving money on the often expensive publicity costs (See image 20) until the circus could afford custom designs of their own.

The end of the 1960’s saw Bertram Mills Circus close and Chipperfield’s embark on a tour of South Africa. Though they continued to produce shows for television well into the 1980’s, Smart’s folded up their big top for the last time on Clapham Common in the winter of 1971 — The Big 3 were no more.

This gap in the market, however, enabled the small and medium sized shows to prosper and grow. Shows such as Robert Brothers and Gandey’s expanded and as they did their posters became more bespoke and depicted the acts and individual styles of the different shows. Initially working as a partnership, Gerry Cottle and Brian Austen, along with his two brothers Michael and Patrick, went on to tour as Gerry Cottle’s Circus and Austen Brothers Circus respectively. The style of both of these shows was very individual and was reflected in the posters and other publicity material (See images 21 & 22).

Formed in the mid 1800’s, Sir Robert Fossett’s Circus remained a steady member of the touring circus set. Best described as ‘traditional’ its style of posters reflected this approach and over the 150 years it produced posters covering all of the styles outlined above. (See image 23 above)

The introduction of computers and further advances in design and printing techniques has seen an increase in the use of photographs in modern poster work from the 1980’s to the present day. A single-design photo montage on glossy paper is now ‘de rigueur’ for most circuses and the use of photography on posters has been used to striking effect by some modern shows (See image 24). But collectors ultimately believe that nothing can beat the posters of old – or maybe that’s just me! Historian, Author -United Kingdom
Steven B Richley is a collector of circus posters and the author of ‘The Posters of Bertram Mills Circus’ and ‘The Posters of Billy Smart’s Circus.’ He has also published ‘Sir Robert Fossett’s Circus - The Definitive Visual History’ and ‘Reco’s Circus’ with Mark Twitchett. See www.DoubleCrownBooks.com for more information.
You are about to enter a members-only zone.
To share this article on your CircusTalk member page and connect with circus professionals from all over the world, sign up now. It's free!
Sign Up
Already have an account?
Log in

Steven B Richley is a collector of circus posters and the author of ‘The Posters of Bertram Mills Circus’ and ‘The Posters of Billy Smart’s Circus.’ He has also published ‘Sir Robert Fossett’s Circus - The Definitive Visual History’ and ‘Reco’s Circus’ with Mark Twitchett. See www.DoubleCrownBooks.com for more information.