3 AM Theatre– The Time to Dream About (& Plan) Circus 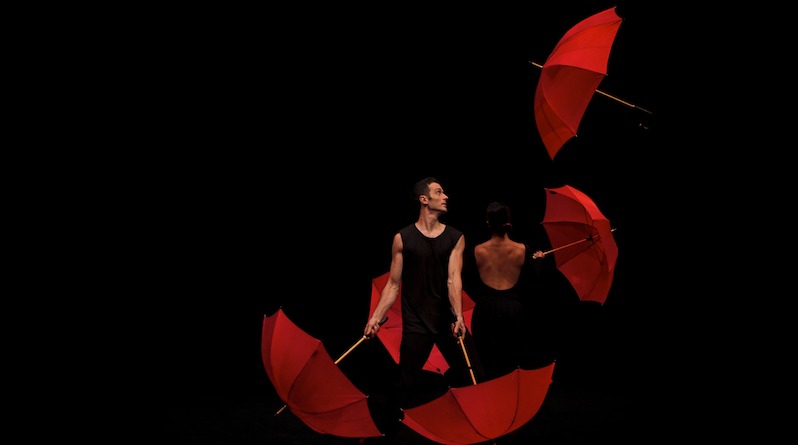 3AM Theatre is one of the new breed of small circus companies like Cirque Us and Acrobatic Conundrum that is popping up around the US as contemporary circus becomes more recognized around the world as one of the core performing art forms by forward thinking presenters and savvy audiences. 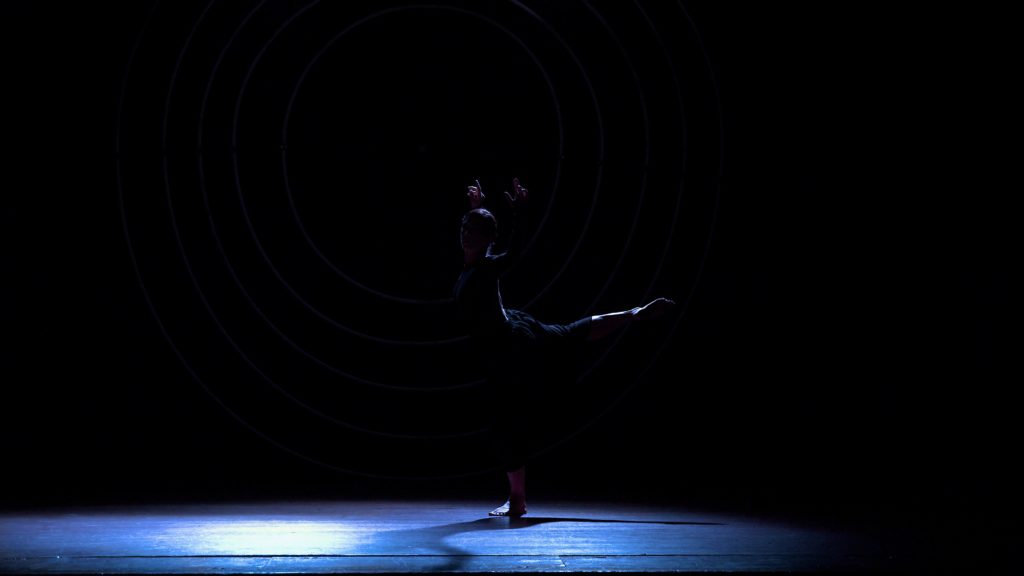 3 AM Theatre, founded by Kyle Driggs and Andrea Murillo, has a lot to offer the contemporary circus world; a strong vision for their work, a five year plan for their company, years of combined expertise in dance and juggling–and a cross appeal that makes them marketable to the circus, dance, film, youth and fringe world. Their new show, with the working title Graveyard Slot, is a poetic, surreal and sometimes even geometric take on their signature style, visually powerful movement that blends the disciplines of contemporary circus and dance with physical theater. I sat down with Driggs and Murillo this past summer in their residency studio, housed in Circadium School of Contemporary Circus in Philadelphia to discuss their plans to grow as a company, and their inspiration for the current showthe Graveyard Slot which premiered at the Fringe Arts festival a couple of months later.

What is a Graveyard Slot?

Driggs described the show, “It consists of a lot of individual vignettes that are weaved together. I juggle all sorts of different things… Andrea does a lot of different moving pieces on different surfaces and apparatuses and it’s using all of those as tools to tell a thematic story. In the juggling, we do a piece where we juggle umbrellas together. That’s kind our main centerpiece of the whole show I would say because it’s a very visual. The umbrellas take up a lot of space, they’re beautiful and we juggle six of them at a time, passing them around–and then another piece is, clouds…” 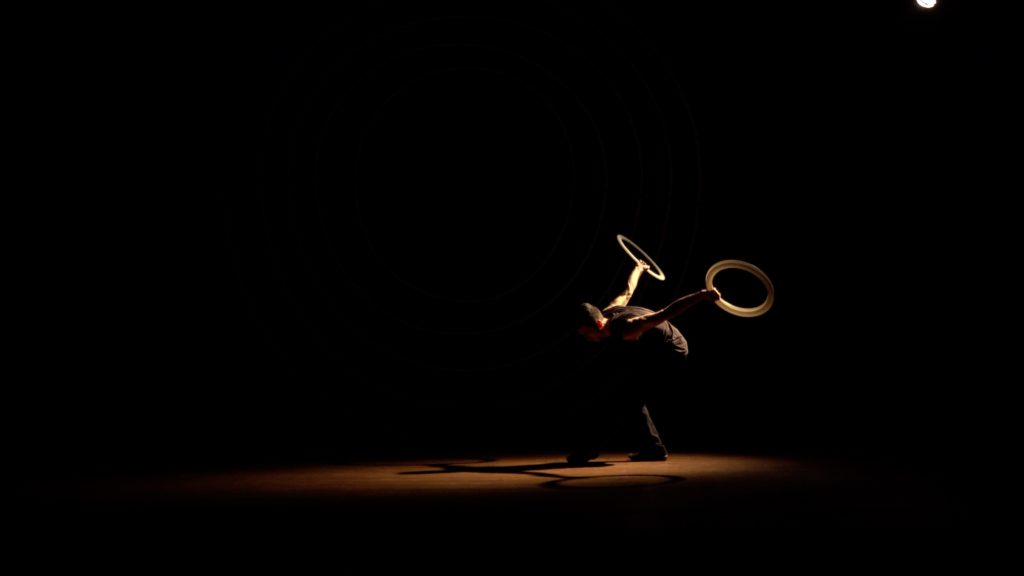 Murillo jumped in to explain how the clouds act in the Graveyard Slot has the minimalist feel of a Japanese tea ceremony but on a moving table while juggling occurs, “It’s super simple and stoic and gentle and every moment is for a reason, and we’re manipulating the balls, but it is like a tea ceremony. It’s really precious.” Their enthusiasm for their co-creation is contagious and even describing the visual aspects of it creates a strong picture. But there is more to this duo than a show. They’re both consummate professionals with years of experience as performers, Driggs as a juggler, and Murillo with dance.

Both artists were based in New York for years before they teamed up. Driggs was in Cirque Du Soleil’sParamour and was a silver medal winner at Cirque De Demain in 2014. Murillo danced with Martha Graham Dance Company and was part of the immersive theater showSleep No More. They both felt it was time to branch out and do their own work, so they created 3AM Theatre, says Murillo, “That’s something we’re very passionate about and we’ve thought about for all these years of working with these other companies. We felt like we were at the right age to just make the decision to go for it and in conjunction with this school opening and the opportunities we have here, it just felt like the timing was perfect.” 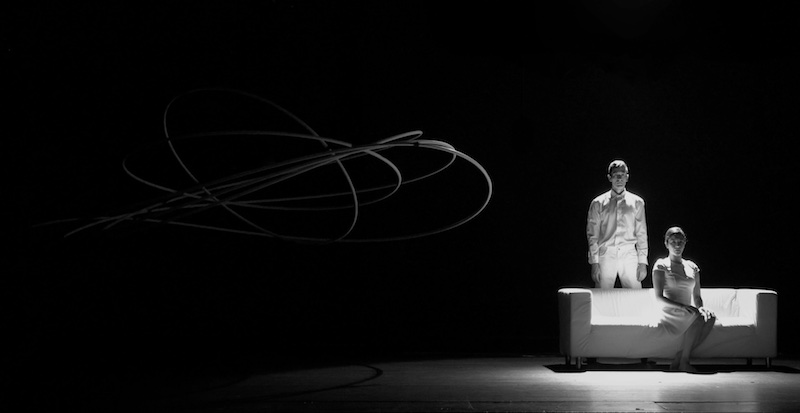 So they moved to Philadelphia to teach at Circadium and have a residency space for their fledgling company.  Driggs grew up in Philadelphia where he started as a hobby juggler. As a kid, he met Greg Kennedy (the current co-owner of the Circadium campus along with Shana Kennedy). Kennedy became a mentor to him when he was younger, “Greg’s a juggler and an engineer and he builds a lot of structural geometric type work. It’s kind of in the same realm of Michael Moschen.” Later Driggs went on to circus school at ENC in Montreal, before working with the big companies for a few years and before meeting Murillo and deciding to join forces  in creating a small company together. Murillo says Driggs sense of movement is quite fluid as a juggler and she encourages him to add more dance, and Driggs has obviously put her to work juggling in the show, so their collaboration efforts have led them both to grow as artists.

There is a time at night–at 3:00 in the morning where reality isn’t really set and you don’t really know if it’s daytime or nighttime. Usually it is the time where dreamers just come out to create as an artist.

Murillo explains the dynamic and how it led to their company vision, “I’m the dreamer, the subconscious. I’m super interested in the word ‘vibration’ and what that is in existential terms. We’re inspired by artists like David Lynch.” Describing the genesis of the name 3AM, she adds “There is a time at night–at 3:00 in the morning where reality isn’t really set and you don’t really know if it’s daytime or nighttime. Usually it is the time where dreamers just come out to create as an artist.”

Driggs says “You’ll feel that with all of the work we do in the company, whether it be film, theater, an immersive performance–it will all have that essence in the work.” Similarly, the working name of their show Graveyard Slot refers to a time period in the middle of the night between 1 and 5 AM where TV programing is quite affordable because no one is awake to watch. Driggs explains the concept for the show “It takes place in that time period and two people who are in an intimate relationship traverse through the graveyard slot” —to discover what that bizarre journey is like, before emerging into the morning.

Experimenting with Artistic Models For Success

But dreaming alone won’t get a circus artist or company very far  these days. Getting off of the ground, even with the help of friends, can be challenging for small US companies getting their start, and they often have to reinvent the wheel to find funding and the resources of time and space to develop the show.

I asked how 3 AM plans to address those challenges, and Driggs and Murillo shared a multi-tiered plan for the growth of their company, the devising of which obviously explains some of their insomnia references. “America has a very corporate model and I think we can either push against that or we could take advantage of that and create any artistic model that collaborates with that,” Murillo explained, pointing to her previous experience in the theater world as a place where she gained insight, “ I learned a lot from Punch Drunk with events and bringing people into your world through an event and labeling it as an event and not just doing a two dimensional frontal event where you come in to do your act, but creating a world and making it a theater world. I hate to use the word or immersive, but here when done right, it’s an opportunity.”

Driggs chimed in, “It’s so easy to be like, ‘Oh, there’s no government funding’ or ‘The arts organizations are horrible.’ But then we’re not necessarily a poor nation. You can succeed in this nation. Maybe the approach is wrong by expecting things to operate the same way they do in Montreal or in France and it’s just that we need people to trial and error what that process is. We feel like we’re not the only people doing that, but we’re definitely interested in helping understand what that (process) is. It’s not only for our own success, but just to pave the way for everyone to have an easier time to get their work out there.”

“We’re definitely looking to produce our own tour next summer. We want to do even five months of tour and get the work seen by everyone,” says Driggs. It is all part of their ambitious and multifaceted plan which includes producing a body of work, (including a children’s show to stretch their skillset in to a new territory), and make several short films. Self-producing a tour is part of a whole strategy to build a sound reputation for their company before expanding it to include more cast members for future works and eventually building their own studio. During the making of these huge objectives, they also apparently asked themselves ‘If you don’t dare to dream it, how can you make it happen?’, and it is that mix of planning, daring, talent and grit which usually makes the cocktail of success taste pretty sweet when it happens.

Driggs broke it down, “We’re interested in taking the films we make to a film festival and then just to be in the festival environment, to see what happens when dance films or circus dance films get put on, because it’s such an emerging genre of dance on film and what that means. Is it just filming a dance choreography or is it something more? I think Andrea is in the midst of answering those questions and I’m really interested in answering those questions with circus and then to combine the two.” Murillo agrees, “I mean in the end, it’s just storytelling, right? It’s just how to enhance a story physically. People will see it and it’ll be there forever versus a live performance.”

The transition of dance and circus from a live art to a digital art has already had its revolution on the internet, but 3AM Theatre wants to make a shift akin to the one that happened when theater itself encountered film. What kind of new possibilities arose with lighting, audience perspective, editing techniques and special effects for example? Applying that to circus and dance would certainly be revolutionary–a word that surely fits with 3 AM’s Lynchian vision for its future.