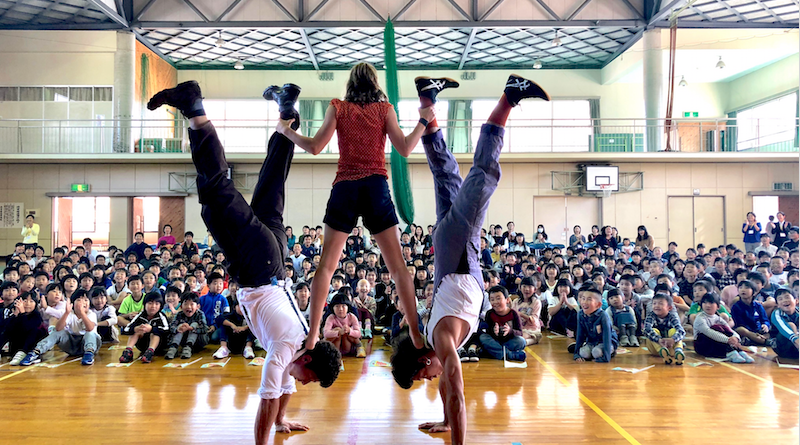 Have you heard of Awaji island in Japan? Speaking of Japan, it’s rare to meet people who can name more than the three cities of Tokyo, Kyoto, and Osaka. Even with my home town Yokohama, despite it being the second largest city in Japan after Tokyo, (and being more attractive than Tokyo, I have to admit) half of the people I meet say they haven’t even heard of the name (*sigh). So don’t  worry even if you don’t know Awaji!

Just how popular is the Awaji Island in Japan, then? If you ask a random Japanese person, I’m sure more than 90% of people know the name, but if you ask if they have been there, my guess is that more than 90% would say, “No”. It took me nine hours by night bus to get to Awaji Island from Yokohama (which is almost in the center of Japan). The island is located in the west and is close to big cities like Kobe, Osaka, Tokushima. 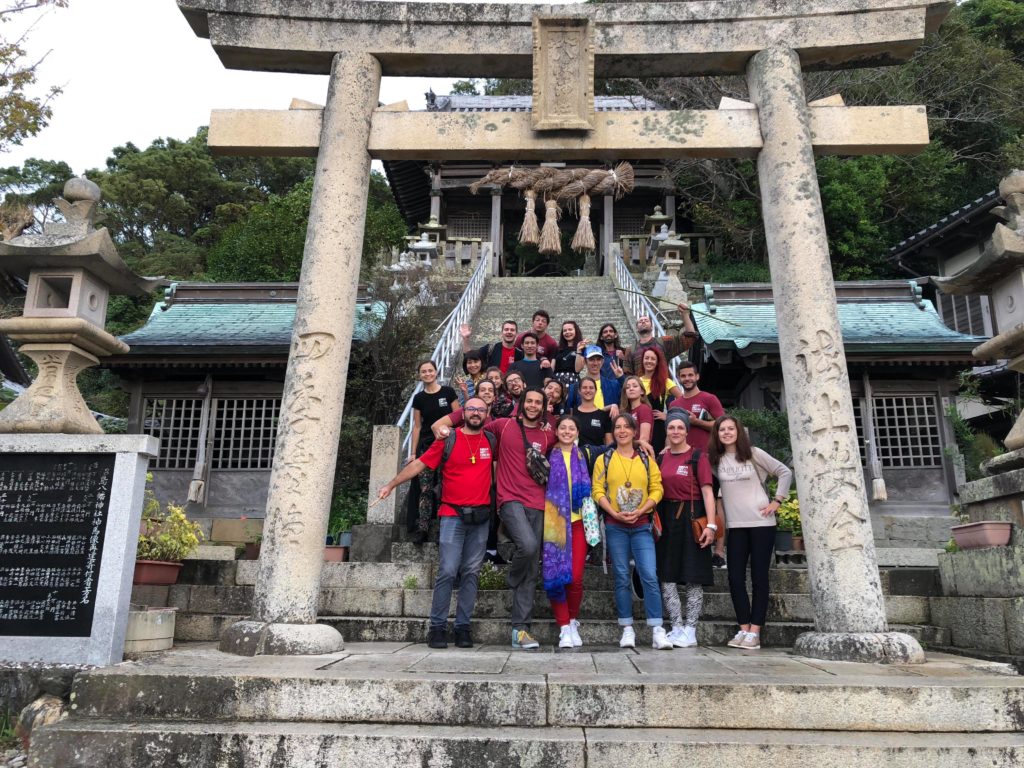 Awaji Art Circus is a month long project held in Awaji Island mainly aiming to promote the island itself, and contemporary circus arts in general. It consists of series of events, including public shows and workshops for locals. This year, Awaji Art Circus celebrated their 4th anniversary and they invited 17 artists from seven countries, namely from the UK, Italy, Spain, Russia, Hungary, Romania, and France. The artists spent an intensive time together on the island for a month, and during their stay, they traveled around the island performing. The artists stayed at an old style Japanese house provided by Pasona group, the organizing company of the event. In the house, there was a huge living room where all the artists could gather and have relaxing moment after their shows. It felt pretty much like a circus caravan, except it didn’t relocate.

The first day I arrived, Elena Bzhola, one of the main organizers of the project, fetched me and drove me to the house that the artists were staying at. When I got there, I was warmly welcomed by the organizers and artists of various nationalities. I was very surprised to see that variety. It felt like I was in Europe, because in Japan, from what I have experienced of circus, juggling, street performing or arts festivals, it is rare to see this many people from different parts of the world spending so much time together for one event. Normally, such festivals that invite foreign artists would be mostly only for a few days, or a few weeks at maximum.

About the Growing Circus Scene in Japan

Like in other countries, Japan also has its contemporary circus movement, both at the institutional and individual level. There are circus promoting organizations like Setouchi Circus Factory, and theaters around Japan often invite contemporary circus artists/companies from overseas. The biggest street performance festival in Japan, called Daidogei World Cup is in Shizuoka. It is a four day long festival that invites more than 10 companies from overseas every year. The biggest juggling festival we have is called Japan Juggling Festival which invites at least one juggler from overseas every year.

As a juggler myself, I’ve seen many Japanese jugglers inspired by “circus jugglers” from other countries. Japanese amateur jugglers on the other hand, have much influence on the world’s juggling scene, although mainly via the Internet. Nonetheless, Japan is attracting jugglers around the world by its unique juggling style. Also, if you look at the professional side, Japanese artists such as Cru Cru Cirque, Tsubasa Watanabe, and Hisashi Watanabe for instance, are very active in European and Asian circus festivals. It’s safe to say that Japan is also playing a certain role in the international circus scene.

In Awaji Art Circus, on weekdays the artists are separated into groups and go to three different venues, changing the combination every once in a while. The venues are spread all over the island, one in each of the three cities of Awaji (which are Awaji, Sumoto, and Minamiawaji.) Thus every morning the artists would move to the designated venues by car and prepare for a couple of shows in the afternoon. On weekends however, special events take place, so all the artists gather in one place and present a bigger show.

On the first day, I followed Cheese on Fire and Nicolas Provot, all French artists. Cheese on Fire is a hand to hand duo, and Nicolas Provot is a ladder acrobat artist. We moved together crammed in a big car to the school located south of the island where they did their acts and gave a workshop to an elementary school kids. Along the way, chatting with the artists, I was already starting to feel like a member of the troupe.

The school gym was full of students and when Bzhola asked the audience of kids if any of them have seen Awaji Art Circus before, many of them raised their hands. I could sense much anticipation from the rest too. Indeed, it seemed that they really liked what they saw. When Rom from Cheese on Fire was acting funny, the kids burst out laughing, and when Nicolas’s ladder nearly hit the audience (of course, intentionally) they went crazy. After the show, they had a short cultural lecture about France and as a workshop they introduced some easy circus exercises. Again, the kids looked very interested and excited. The moment I really liked was when some of the kids screamed with embarrassment as soon as members of Cheese on Fire started to dance together, holding hands. After the school show, we headed to a hotel for another performance in the hall, and went back to the residence.

After having dinner together, we had a small improvised party in the living room. There were more than enough musicians and performers to make an instant show, and I also joined in with diabolo. This kind of time actually felt essential for this festival to me, because although there are many types of circus festivals, often because of limited time, it is hard to find time to observe how the others behave outside of their business. From my point of view, seeing other artists’ attitude towards life is important, because the creation of art and the life in the end, is inseparable. When I asked Rom from Cheese on Fire and Nicolas about the festival, they said one of the good things of the festival was that the artists themselves had ample time to get to know  the others, including not only people from other circus disciplines, but also musicians and even a professional beatboxer.

The next day, I followed the one-man-band GALiRò (from Italy) and acrobatic rock’n’ roll dance trio Dance Club Positive (from Russia). The venue was a huge square covered with grass in Sumoto city, in the middle of the island. As an environment, it was such a nice setting with a huge tree in the center of the field, so people could watch shows in the shade, feeling the breeze. As for the performances, I especially would like to mention GALiRò’s playful style with his unique handmade one-man-band instrument. He created a natural uplifting atmosphere, and yet without any intrusive interaction,which works very well with a Japanese audience, and it made for nice atmosphere with the relaxed air of the place. Although the audience was not very big, for all the people who were there, it was truly a fun moment.

The last day in Awaji

On Sunday, I joined a big event inMinami-awaji. The venue this time was a place called Keinomatsubara with a  stage decorated with tiles (Kawara Butai)  beside a beautiful beach. The day began with a morning yoga session led by one of the artistsCarmina Dilimot who plays drums drum in theBarbarossa Samba Group. On stage, from the morning to the evening, there were consecutive performances by all the artists, as well as by local singers and dancers. Some of the other artists were the music trio Aikyo from Spain (playing exotic music by the handpan and the cello) Soul Illusion (a speed costume changing duo from Hungary and the UK), Marv Radio (high-skilled human beatboxer from the UK), and the Barbarossa Samba Group from Romania. They were all quite different from each other and high-level performers.

I took a few moments to interview some of the audience, and they all agreed that each performance was very entertaining, and beyond what they anticipated. Although some said, as a “circus” festival, Cheese on Fire (hand to hand) and Nicolas Provot (ladder acrobat) were closer to what they expected to see (since half of the artists were musicians rather than circus artists)–although they were still very satisfied to watch the show. I also asked audience members where they were from, and about half of them answered that they were from outside of the island, especially the neighboring cities like Osaka, Akashi, Tokushima.

Time Spent with the Artists

As I spent time together with the artists, although it was just for three days, I felt so much connection with them and the organizing team in the end. Every morning when I headed to the venue together with the artists, the car followed the gentle and beautiful shoreline curve of the island. The weather couldn’t have been better, and the ocean was shining in the morning sun. I think that staying in Awaji gave the artists a much better impression of Japan than staying in Tokyo for a month would have. Of course, everything was less convenient (still, there are many convenience stores in Awaji too), but as a place to spend intensive time with good people, thinking about art and life, I can’t really think of a better place.

One of the artists told me that the festival made him consider moving to Japan. As a matter of fact, of the festival organizers this year, two of the main people were previous performers who now actually live in Awaji.

As I see it, this unity the group developed was the crucial part of the festival. Although the event itself was not as big and busy as the other circus events in Tokyo or Yokohama, rather, because of that, the artists and the staff could fully immerse themselves in talk and inspire each other. Three days were way too short to fully capture how effective this festival was at promoting Awaji Island itself, but for sure, for the artists and the team that made the festival happen, it was a gem in their lives, and mine as well. Writer, Performer -Japan
Naoya Aoki is a juggling performer, practitioner, and the founder of Japanese Juggling Magazine PONTE. He learned how to juggle at the age of 14, and teaches himself to this day. Since 2012, he has visited more than 15 countries for juggling related events, and yet he is still trying to travel more and to meet people as far as juggling leads him.
You are about to enter a members-only zone.
To share this article on your CircusTalk member page and connect with circus professionals from all over the world, sign up now. It's free!
Sign Up
Already have an account?
Log in

Naoya Aoki is a juggling performer, practitioner, and the founder of Japanese Juggling Magazine PONTE. He learned how to juggle at the age of 14, and teaches himself to this day. Since 2012, he has visited more than 15 countries for juggling related events, and yet he is still trying to travel more and to meet people as far as juggling leads him.