A Day at the (Academic) Circus: Reporting from the Popular Culture Association National Conference 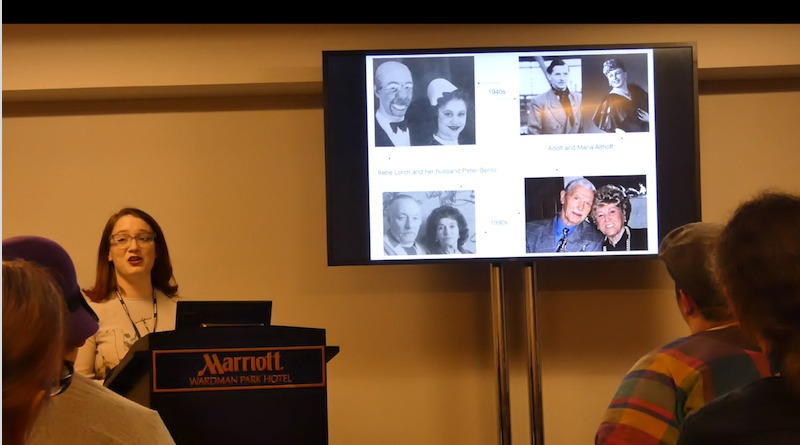 Last month in Washington DC, the Marriott Wardman Park hotel played host to the 2019 Popular Culture Association’s National Conference. The hotel was abuzz with attendees, ranging from academics and enthusiasts, to speakers and viewers, and people with interests ranging from sci-fi and fantasy to comics and horror, young adult literature, visual effects–and even circus and sideshow got its due attention. With all the circus and sideshow panels arranged into one full day, it was an intense experience brimming with historical research, social questions and cultural exchanges. 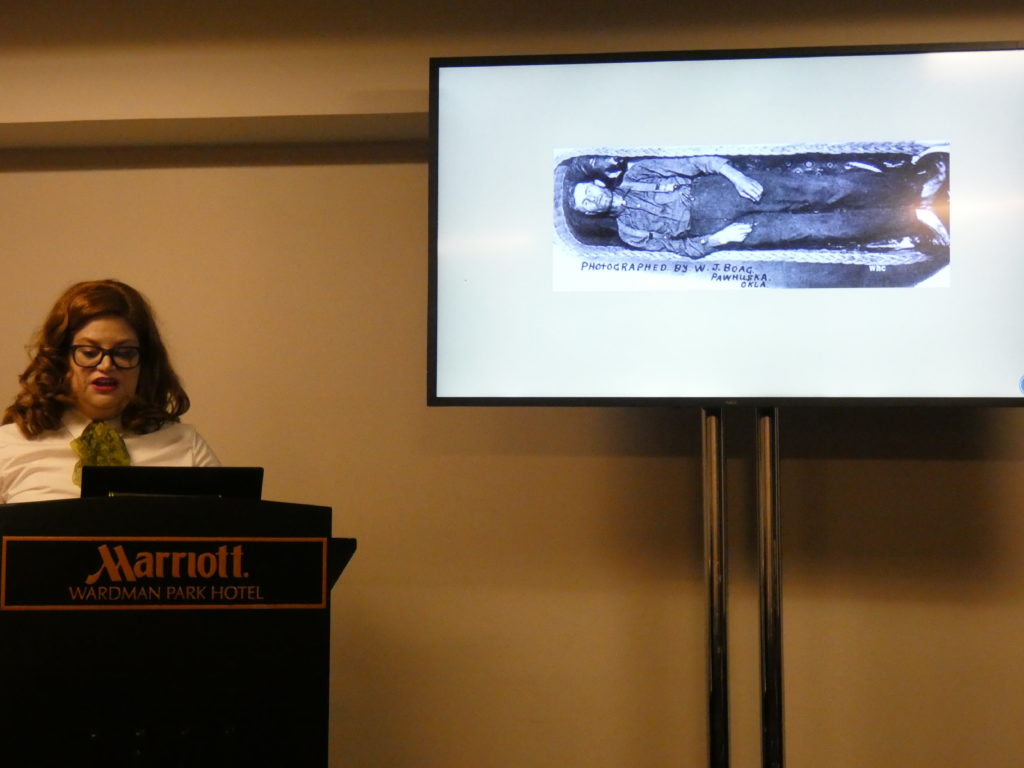 Chairing over the day was Dr. Stacey Mascia-Susice of North Country Community College, who brought together a diverse range of speakers for three panels of various aspects in the world of circus and sideshow. The first panel was titled “Social Evolution of Sideshow: Rejection and Reception of Past and Present Performances”. Ilse Carter (AKA The Lady Aye) courageously opened the day with her talk “Alive on the Inside: Life, Death, and the Sideshow”, exploring the unusual history of dead bodies in sideshow world and the myths that grew around them, injecting them with a different kind of life. “A fascinating lie is better than a boring truth” seemed to be a recurring theme, as Ilse demonstrated with one particularly powerful example: Elmer McCurdy, a mediocre and not-so-successful robber whose mummified body toured sideshows as “The Bandit Who Wouldn’t Give Up”, his crimes exaggerated and his feats made larger-than-life.

Next in the panel was Rodney Alan Huey, who spoke of “Ringling’s Display of ‘Otherness’ – From Sideshow to Center Ring”. Armed with a PhD and years of personal experience working for Ringling Bros. and Barnum & Bailey, Huey brought a great mix of academia and real life experience to his talk. He challenged me to consider something I’ve haven’t deeply thought of before: How sideshow, now appearing to be a separate world to that of circus (particularly contemporary), is still very much present in what we consider to be “pure” circus. By looking at the history of circus and the way sideshow was slowly been excommunicated from it, Huey demonstrated that in fact sideshow-type acts are still present in traditional circus today: Acts with an underlying “freaky” element, such as contortion, fire breathing, and sword swallowing, found their way center ring. 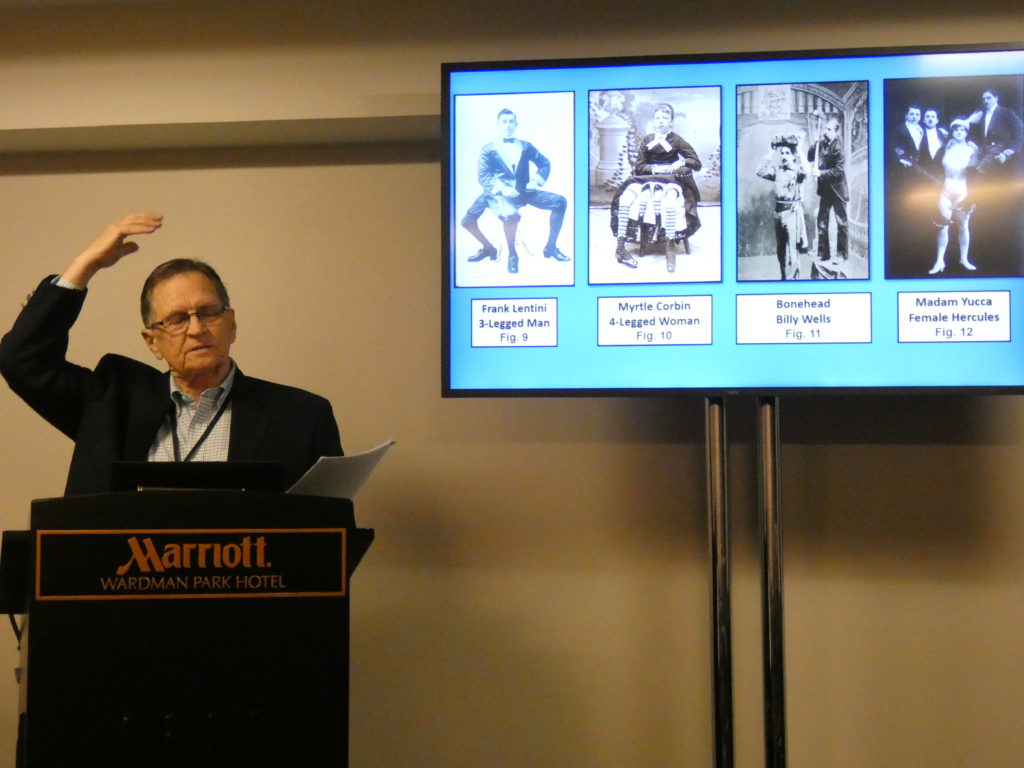 The most heartfelt talk in that panel belonged to Alexandra Doll, whose “Permission To Touch: A Perspective of Sideshow Through the Looking Glass” was not only informative, but also an open invitation to consider the voices of sideshow performers in this “woke” age. When she told the true story of “Little Liz”, a small woman who had been happily making her living in fairs until her act was banned in Boulder, CO because of audience complaints, Doll asked us to consider the delicate balance between protecting the rights of marginalized people and taking away their autonomous voices. Have we become so worried about the abuse of minorities that we now take the liberty of speaking for them? This “confirmation bias” was a very interesting perspective to consider.

Following the first panel was a screening of the short film “Circus City, USA” by Adam Michael Wright. The film examined the town of Hugo, Oklahoma – where over the past 60 years more than 20 circuses made their winter home. It was a fascinating glimpse into the world of multigenerational circus, made in a town that takes pride in its circus culture and for whom circus is not so much a novelty rather than a fixture of everyday life. 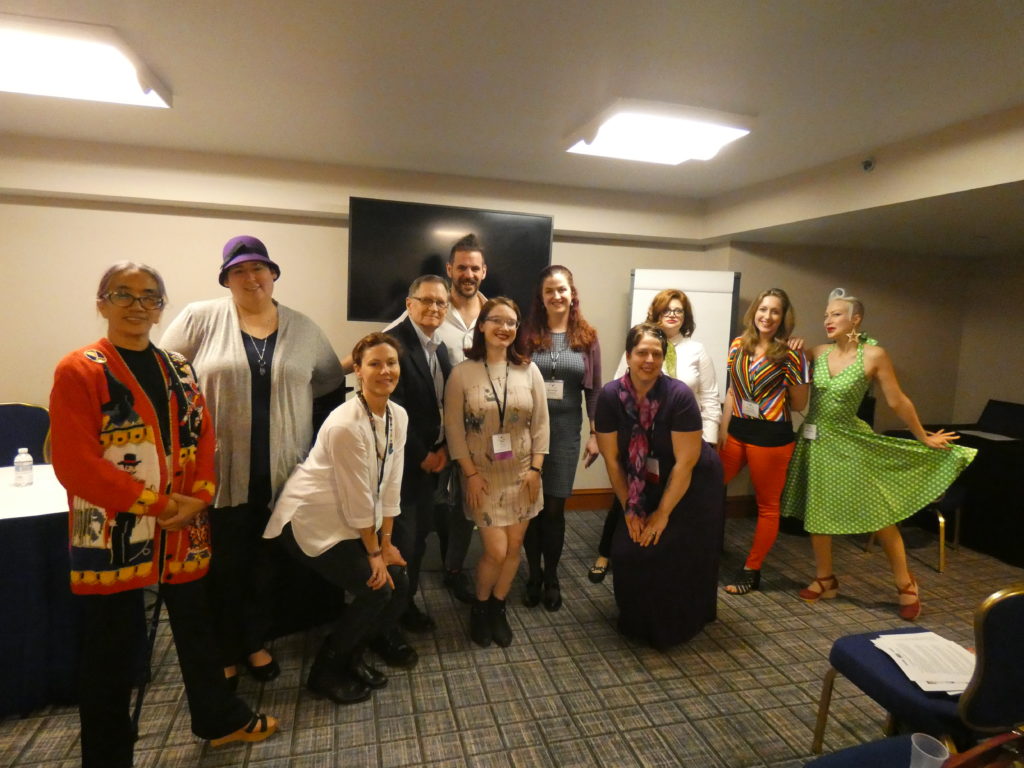 The second panel took a turn from sideshow performance into the arena of politics, titled “Political, Cultural, and Entrepreneurial Discourse in Circus and Sideshow”. Dr. Stacey Mascia-Susice opened with “Political Rhetoric in the Arena: Slinging Mud on the Circus Big Top and Sideshow Banners”, offering an examination of circus vernacular in the realms of politics and media. Using both new articles and caricatures, Mascia-Susice demonstrated how the public’s perception of concepts such as “circus” or “clown” is reshaped by comparisons with political and media shenanigans. Next, Toni-Lee Sangastiano extended on Stacey’s talk by digging farther back in history with “The Postmodern Sideshow, the Circus, and the Politics of Media: Talking Back”. Trying to trace the roots of the circus/politics comparison, Sangastiano brought French caricatures from the time of George Seurat, whose massive circus painting was a reflection of the period’s growing interest in the world of touring carnivals and circuses.

Lastly, I had the honor of closing the panel with “Forgotten Legacies for Present Day Audiences: Circus Jews Under National Socialism”. Mine was the only talk that combined a performance element: I spoke about three of the major Jewish circus families who were active in Germany between the two world wars, and connected the research to my upcoming show: “The Escape Act – A Holocaust Memoir”. I showed an excerpt from this show that explored the connection of past and present, as my research into those circus histories reflected in my own experience growing up a grandchild to Holocaust survivors. 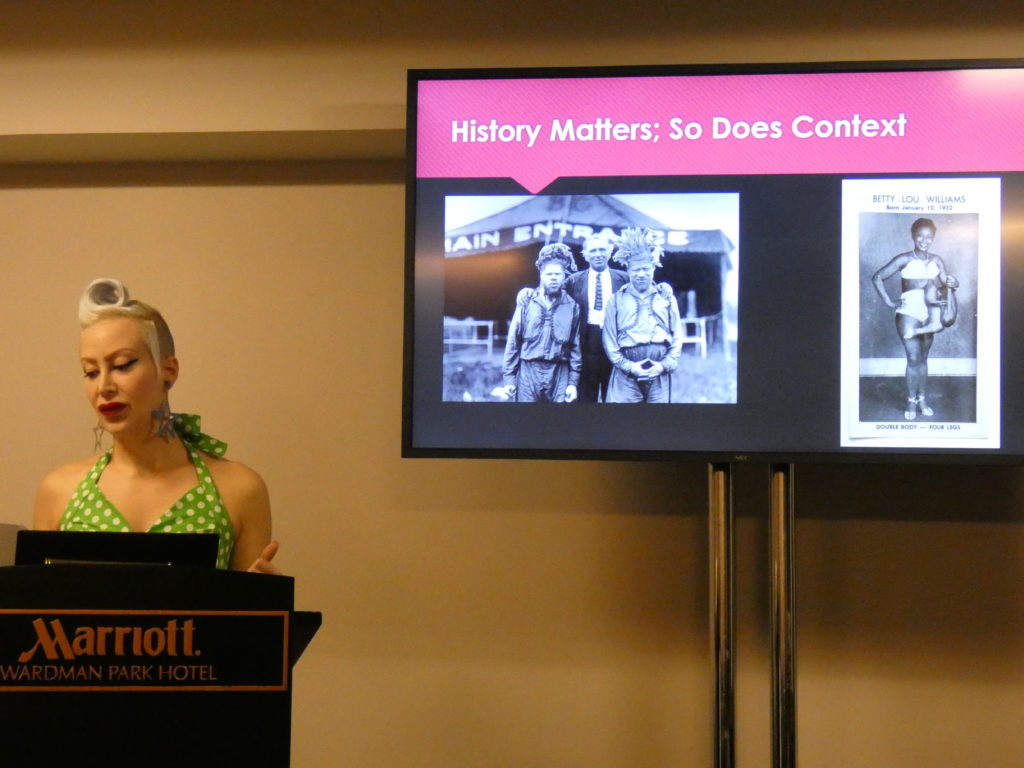 The third and last panel – “Bending Bodies: Exploring Performance and Recreation” – started with a dual reflection on recreational circus schools in America. Lucy Nguyen’s “The Rise of Recreational Circus and the Evolution of Circus Schools” shared the names of some of America’s leading recreational, youth and social circuses, while  Kristina Downs’ “Finding Your Wings: Empowerment Narratives in the Context of Recreational Aerial Arts” raised interesting questions about the connection made between strength and the empowerment of women. Questioning the concept of strength = empowerment as applying masculine standards to women’s changing ideals of self-definition and confidence, Downs challenged her audience to consider whether recreational circuses’ re-packaging of a strong body as a pathway for women in aerial arts to improve their self-esteem is necessarily a fool-proof connection.

Next, Ayal C. Prouser’s “Vestis Virum Reddit: Performers Performing Gender” brought a historic outlook into gender performance – not only male vs. female but also the complete stripping away of gender in search of neutrality. This concept was demonstrated with the particularly memorable Barbette, an androgynous early 20th century aerialist who did not present as a man playing a woman, but rather genuinely passed for a woman in the eyes of his audience – performing in full  drag until revealing himself to be male at the end of his act.

Last was Stacey Carlson with “Cultural Norms in Circus and Dance”, who compared dance and contemporary circus through the lens of the audience’s changing expectations of circus today, as the connections between both worlds grow.

Each of the above three panels, as well as the movie screening, was followed by a Q&A between audience and speakers. In a room filled with curious and knowledgeable people, the questions were stimulating and the responses allowed for a genuine dialogue. While I, personally, would have loved to see a more diverse room, with more attendees from outside of the circus, it was a wonderful experience to be surrounded by those who care so deeply about circus past, present and future and who have made it their mission to illuminate various aspects of its rich culture.