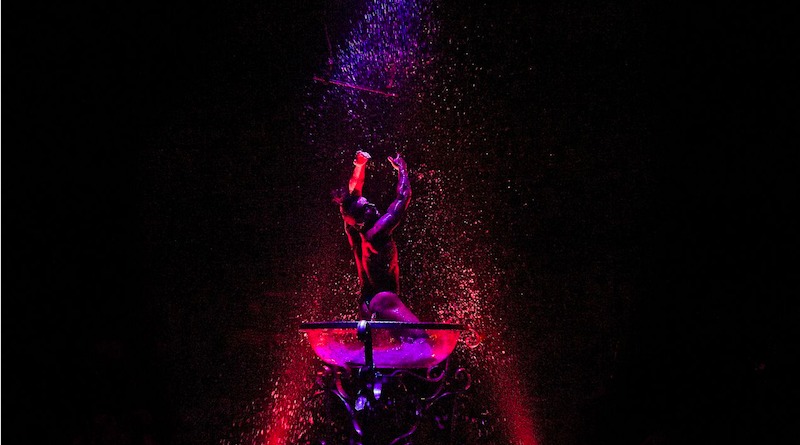 Makeup and mustaches, feathers and leather, bananas and balloons, these opposites are toyed with in just the right proportion to break down your resistance, to make you laugh, shout with shock and joy, and shake your head at the ridiculousness of it all, but slowly they chip away at your notion of what is and what ought to be and why…

The show title isThe Second Coming, but for Briefs (part of the Briefs Factory collective) it was their first coming to America, performing for two nights only at NYU’s Skirball stage during the week of APAP. According to the artistic director, co-performer and also MC of the bunch, Fez Fa’anana, it was a dream come true. The joy of the cast was palpable as they ran through the show, a series of numbers which blends burlesque with drag and circus in the perfect mash up of cheeky fun, queer joie de vivre and a dash of anarchy.

The all male cast stands up to their tagline of “Manufacturers and distributors of evocative, irreverent, political punk performance.” This is reflected in compelling ways–namely by subverting the gender paradigm and shamelessly celebrating queer culture, and it works especially well when they pair it with circus, which they do quite often, showcasing aerial, juggling and acrobatic skills. The company is now in its 10th year, and has expanded to run several shows with a similar aesthetic including,Club Briefs, Sweatshop, Brat Kids Carnival andSlumber Party. Briefs Factory also has a sister show within the collective called Hot Brown Honey (who were unfortunately not in attendance and whose US debut is yet to come.)

The Second Coming begins with a Vegas-like dance number. Bedecked in various degrees of business suit, but wielding the giant white ostrich plumes of a showgirl with precision, the six Briefs boys (as Fa’anana sometimes lovingly refers to them) displayed their burlesque chops by shedding pieces until they were hidden mostly from sight behind feathers, but sporting only their white briefs, which showed up in a flash as the stage lighting went suddenly to blacklight, plumes were dropped and the crowd erupted with joy.

There were many numbers like that, interspersed with Fa’anana’s drag MC visitations, always wearing a new gown to match his beard, and full of the razor wit of any respectable Australian. Even seemingly straightforward solos like Thomas Worrell’s lyra act managed to confront patriarchy just by existing (and obliterating the line between masculine and feminine) in the sexiest possible manner, as he fluidly maneuvered, seemingly floating around on the lyra in a glitter bedecked hood.

Brief’s irreverence was apparent throughout the show, mostly serving comical jolts that shocked just enough. From poking fun at sporty bros with a jump rope duo, to a petulant schoolboy yoyo act by the astounding Louis Biggs, to the crass Evil Hate Monkey (played by Monkey) who discovers fire but is nonetheless more obsessed with his banana and all of its ramifications (yes, I said it). There’s a magic number by Fa’anana, where the middle finger plays a pop up role to the shocked delight of the crowd, just as the outlandish clowning of the drag queens (especially Dallas Delaforce, known for her avant garde style, and subsequently also her amazing costume designs in the show) crosses over from flippant to crass. The Brief’s virgins of the US audience held their own, keeping up with the humor and deep dives in to some unconventional terrain, and often guffawing, and shouting their pride at these moments.

But The Second Coming is more than a glorious embracing of queer culture. It is also a thumbed nose to the establishment and a disruption to the status quo. Yes, I know Billy Porter just wore a dress to the Golden Globes and the time is ripe for society to confront gender stereotypes. But the Briefs boys are confronting more than gender— they are questioning colonialism (the final act is a glittery number that features the Australian Aboriginal flag, and they took the time to explain its importance in their culture) and sometimes civility itself (with some taboo forays into leather dog boy play that went from lovably raunchy to downright scatalogical very quickly.) What would art be if it didn’t cross lines and cross them frequently, provoking questions among us? But crossing lines means sometimes toes can be stepped on, and they did risk showing some of the more negative aspects of masculine culture–for example, when audience volunteers were not clearly afforded the luxury of consent, and the portrayal of women in the drag numbers readily tipped into scary clown territory.

While I subscribe to the belief that all gender is drag, my companion for the evening frowned at Dallas Delaforce’s Marilyn Monroe kittenish drag clown act that involved giant pink balloon boobs and psychotic mood swings. My friend was an accomplished clown herself, yet it was clear she did not perceive the grotesque of the buffoon as coming from a loving place as she whispered to me “I think someday this sort of misrepresentation of women will be seen as akin to using black face.”

Perhaps she was right, but Delaforce’s bizarre depictions of women go beyond exaggerated sexual organs and spiral off in to suggestions of violence (she pulled several weapons from her décolletage throughout the show). Delaforce’s energy often missed the mark for me too, except for one resplendent act, my favorite moment of the show, where she got up on a square of light with three of her Briefs brethren and strutted her stuff resplendently on the tiniest runway treadmill, wearing the most ludicrous long blond wig that blew in just the correct way to convey haughty badassery. This was paired with Fa’anana on baton in a gold lamé catsuit, Thomas Worrell on chair showing off his hand balancing and striptease sensibilities, and with Mark “Captain Kid’ Winmill rocking the hula hoop.

The finale solo of the show was Mark Winmill, Australia’s boylesque superstar and a former Vegas King of Burlesque. His number on trapeze involved a showgirl inspired burlesque strip tease, a water feature with so much splashing and a whole lot of risk–all while projecting a sensual masculinity dressed up in feathers and glamor. It brought down the house, as did the entire show.