The Ukrainian war has given a frightening actuality to My Land, by the Hungarian company Recirquel, which is currently touring in France. The performance tells a story of eternal allegiance to one’s homeland, based on the personal stories of the seven Ukrainian artists who star in it. They have been on stage every night since the outbreak of the war. Their performance now has a different purpose: now they perform it for their homeland, family, and friends.

On Friday, the company gave a mystical performance. It felt as if a dire prophecy had come true that night. Due to the war, the piece was completely transformed; it had gained new meaning from the first movement to the last gesture. “The artists worked as if they were fighting for their lives on stage. I’ve never seen anything like it,” said Bence Vági, artistic director of Recirquel, who was present at the performance.

“The curtain went up,” continued Vági, who struggled to find the right word to describe the experience. “The female protagonist, as per the choreography, grabbed the ground that symbolized her homeland, while tears started to flow down her face. Before the performance, she had received the news from home that her mother’s area was already being bombed. The wife of one of the twin performers, Mikola, had just fled to Poland with their child while Mikola was working on stage. The artists performed this piece through caring fear and anxiety for their family and friends. The theme of patriotism in My Land has gotten a whole new dimension since the Russian invasion started.”

The performance was cathartic. The French audience was deeply touched and gave a four-and-a-half-minute standing ovation to the artists, who were wearing the Ukrainian flag. 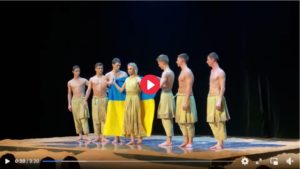 Vági pointed out that there are very few productions on European stages about Ukraine performed by Ukrainian artists. “It’s a weird coincidence; three a half years ago, a lot of people asked why I did this piece, while many find it unsettling how relevant it is today. I can’t really explain it, either. I just fell in love with Ukrainian culture, with these artists, because they’re fantastic. In my wildest dreams, I wouldn’t have thought that the struggle depicted in the show would become so close to reality one day,” he said.

Recirquel is working full force on their upcoming show, which premieres in April. The series of startling coincidences continue, as the theme and title of the new production is PRAYER.

Revolutionary integrated circus company Extraordinary Bodies is returning to Woolwich Works this October with their brand-new production: Delicate. Raw and

September 22, 2022 Stacy ClarkComments Off on Exploring Inner and Outer Spaces at Mirabilia 2022

September 21, 2022 CircusTalkComments Off on Cirque Mechanics Launches “Zephyr-A Whirlwind of Circus” US Tour

September 21, 2022 CircusTalkComments Off on World Acrobatics Society Inducts Nine into Hall of Fame