Life and circus continue in Afghanistan— but in the past year, both have gotten even harder. While Afghanistan’s relative isolation from its neighbors has helped social circus groups like the Mobile Mini Circus Children (MMCC) find the space to grow and thrive there, isolation comes with its own set of problems. The country has seen constant conflict and four government overhauls since the Saur Revolution broke out in 1978. And it was only last May when, capping off a twenty-year-long war, the United States and NATO began the process of withdrawing their troops from the region. No sooner had they begun than the Taliban offensive swept in, retaking Afghanistan’s districts hard and fast until they reached the capital city of Kabul, where the then-ruling Islamic Republic government was based. The city and Republic both had fallen by the summer’s end.

As the Islamic Emirate of Afghanistan, the Taliban has re-established its control and backpedaled on reforms introduced by the previous government. Live music has been outlawed. A new round of restrictions bars women and girls from education and public gatherings and confines them largely to their homes, unless accompanied by a male relative. And in the living wake of conflict, poverty and food insecurity are on the rise; in fact, recent Red Cross statistics say that in the near future, starvation may kill more people in Afghanistan than the last 20 years of war combined. With factors like these in the way, prospects for the average citizen seem bleaker than ever. 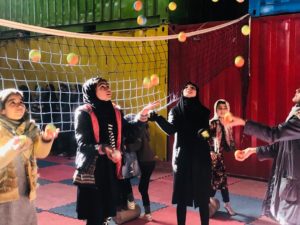 In all its recent history, Afghanistan is a nation that has not had the chance to build itself up… but MMCC Global has long been accustomed to delivering hope in times of crisis. A nonprofit social circus organization, MMCC operates on the understanding that there is something good in every child— and that helping them to discover it within themselves through educational, circus-based activities can change their whole lives for the better.

Carrying this mission forward, MMCC Afghan was founded in 2002 by circus trainers and staff who saw the need to bring a bit of levity into things. They viewed their work as a sort of collective trauma therapy: by introducing circus skills and bombastic activities like juggling, clowning, and performance games to children living in a war zone, they helped them to find joy through play, to gain a sense of agency over their trauma and hone talents and skills they never knew they had. And from that base, these children could build their self-confidence from the ground up.

The MMCC Afghan network has since expanded to include 30-40 circus trainers, each serving about 40 children in different programs and workshops. Working together, children and adults staged performances for their families and communities, which were attended by a yearly audience of about 160,000 people. Unfortunately, MMCC Afghan’s activities have been halted in their tracks by the current Taliban administration, who presently classifies them as one of many blacklisted NGOs.

In order to help Afghanistan survive, MMCC Afghan must fight for its own survival, too… but they hope to win that fight by doing what they do best and making the most of their new situation. To that end, the MMCC has worked strategically within the parameters of current restrictions to establish itself as an emergency charity. They’ve redirected their mission to provide something that they and the new authorities can both agree is an essential service: providing food aid. 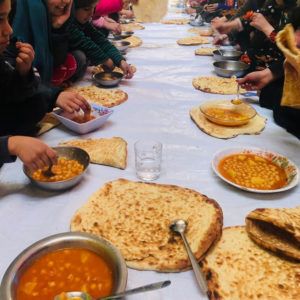 For the next 6 months, MMCC Afghan’s work will focus on feeding the hungry. Groups of circus trainers around the country will provide the most vulnerable children and families with food packages. Basic psychosocial activities for the children, such as juggling, come served on the side. Not only does this new focus help starving families to survive, it also helps the MMCC give a new layer of meaning to their activities in Afghanistan, and justify their continued existence there.

Of course, their social circus activities must be scaled down to comply with the new restrictions; no music can be played during performances, and the girls will have to play their games in smaller groups, separated from the boys. But social circus is a tool that can work miracles. And the MMCC Afghan staff will do everything in their power to keep on bringing levity and hope into children’s lives, no matter how big or small the scale.

Those of us abroad can do our part to help keep MMCC Afghan afloat. Here are 7 ways you can show your support:

1. Donate to them directly at www.globalgiving.org/projects/Sharing, whether as a one-time donation or every month. All monthly contributions will be matched 100% for the first month, and can sustain the activities in MMCC’s long-term planning.

3. Share this article on your social media channels and encourage your network to show support.

5. Create your own fundraiser for MMCC’s BackToLife campaign in a few steps using this link: www.globalgiving.org/fundraisers

6. Make your individual contributions and show support for their Facebook fundraiser here  (www.facebook.com/fund/MMCCglobal).

7. As MMCC doesn’t have the capacity to source their own equipment at present, they’re seeking secondhand supplies from the circus community: equipment, props— anything that you can spare in your training studio. If you have anything to donate, reach out to[email protected] via email, or to the individuals mentioned in their newsletter.

Even in the darkest times, the power of play can’t be overstated. Circus can help us all find hope— and sometimes hope is the best thing to ensure survival.

Elisa Tauro grew up in Toronto and, from a very young age dreamed of becoming a circus acrobat. 1 year

Do You NEED To Go To Circus School?

November 29, 2022 Eric BatesComments Off on Do You NEED To Go To Circus School?