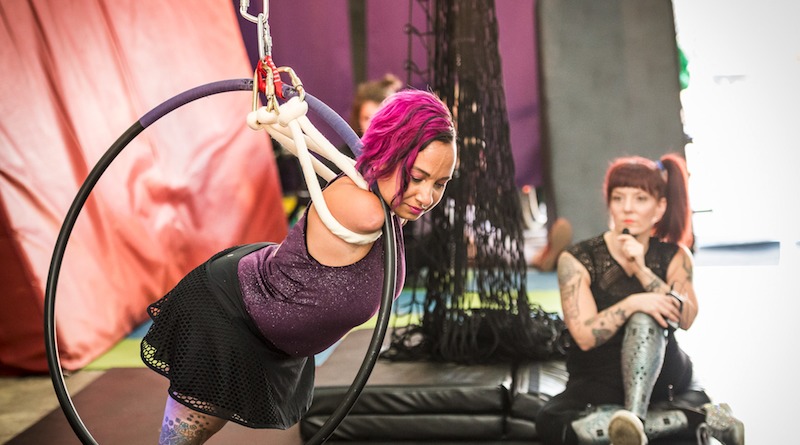 Erin Ball is a circus artist and coach based in Kingston, Ontario, the owner of Kingston Circus Arts and a pioneer in the development of adaptive circus arts. Mainly an aerialist, she also does some hand balancing and other disciplines. In March of 2014, she took a year off due to life changing events that resulted in having both lower legs removed. Since then she has returned to her passion of training, coaching and performing and she loves adapting and creating new/different ways of executing skills.

Ball’s love of movement and connecting with others through movement has led her to work with many diverse groups of people across Canada and the US. In 2017, she developed a workshop and manual, called Flying Footless, a course for aerial coaches working with amputees that has evolved to increase accessibility in circus arts in general.

In 2018, she hosted her first amputee circus camp week at Kingston Circus Arts and recently finished Camputee2019. Ball has many current artistic projects, including her company LEGacy Circus with Vanessa Furlong, various aerial and ground works, and creative audio description projects (to make circus more accessible for the blind and partially-sighted community). Erin regularly collaborates with artists from across Canada and the US, including Femmes du Feu, Heidi Latsky Dance, Anandam Dance, Alex Bulmer, Michele Frances, and many more.

Kim Campbell: Where do you work now and what are your current projects?

Erin Ball: I have been doing many projects all over the place. My current base is Kingston, Ontario, Canada. I run Kingston Circus Arts, a small circus space dedicated to inclusive and accessible movement practices. I also co-run LEGacy Circus with artist Vanessa Furlong, based in Halifax, Nova Scotia. I have many solo and collaborative projects in various locations that typically include telling parts of my story and/or putting diverse bodies on stage while also considering Deaf and blind audiences through inclusion of ASL and audio description.

KC: Who developed the net apparatus and can you give us a brief explanation as to why?

EB: I got the idea for the net apparatus after my annual circus camp for amputees. One of the participants, Talli Osborne, has almost no arms and we explored many ways to get her into the air but we didn’t figure out her climbing on her own. She used hand loops to hang from her armpits and that got me thinking about knots and loops. I talked about it in an adaptive teacher training that LEGacy Circus offers for circus coaches in Halifax and Kyle Scott of Halifax Circus suggested a net. I had only ever seen nets as slings or hammocks but I started thinking about opening one up like silks so that Talli and other people with upper limb differences could climb. I approached Hugo of Circus Concepts with the idea and it was brought to life!

KC: What is camputee2019 and is it all circus training for people with limb differences or is it multiple disciplines?

EB: Camputee 2019 was the second annual Circus Camp for Amputees, held at Kingston Circus Arts. I had the idea a few years ago because I couldn’t find many amputees who were doing circus. I realized that many of them had been told no for a lot of things in their lives and some of them thought they could not. I wanted to change that.

This year, myself and Tina Carter from Airhedz Aerial Training in the UK collaborated for the week. Tina has been working with circus and Disability for years and she was absolutely invaluable this year. Together, we worked with participants and other coaches at KCA to explore various circus disciplines. The actual camp is all circus, but this year I teamed up with some local community members who are doing amazing things for the Disability community. Vicki Keith, a world record holder in swimming who runs one of the largest adaptive swim teams in North America, gave a talk about her work with the community and got the participants in the pool giving everyone individual tips on swimming. We also visited Jeff Dawson at Mercury Strength. Jeff is newer to the world of adaptive lifting but he was fantastic. Every person learned something new and did things that they thought were not possible. Jeff is very focused on proper form which translates to circus, so it was a great fit.

The eight participants came from numerous states and provinces. We worked together for about 20 hours and were even followed around by a documentary crew (to be released later this year). From the start of the project, both Tina and I wanted to make our work accessible to Deaf and blind audiences. We have both worked with Alex Bulmer, a blind artist who created Blind Imaginings, techniques and workshops that involve de-centralizing sight. One of the participants is Deaf and was happy to incorporate ASL (American Sign Language) into the performance. One example of how the performance was inclusive, was at the top of the show. The participants started in a V shape with the bottom of the V at the front. The first people said “Welcome to the show” and signed it  (Talli was in the front so someone was behind her signing since she does not have hands). After that, it was echoed through the V, from front to back, informing blind audiences where the performers were in space and how many there were, in addition to keeping Deaf audience members in the loop. Descriptions were presented by each of the performers at the start of their solos so that they had full control over the words that were used to describe their appearance.

The showing was a 10 minute excerpt from some of the best moments of the week. It was presented at Kingston Circus Arts and also in Toronto, at the Ontario Contemporary Circus Showcase, produced by Femmes du Feu. Each participant had a solo, duet or trio, many on various aerial apparatuses, including a wheelchair suspended from aerial silks. There was also a piece called Screwed, that involved three people screwing themselves together by 4 prosthetic legs.

KC: What are the principles of adaptive circus and how is the research and practice moving forward? Who is working on this around the globe?

EB: There are numerous principles of adaptive circus but one of the most important, in my opinion, is involving the Disability community and/or the individual. For example, with teaching, it can’t be rigid. The “one size fits all” method does not work. The participant is the expert in their own body. Teachers can’t be expected to know every detail about every situation that person experiences but that person knows. Exploring with the individuals is the only way it can work. For other principles, both Tina and I (and Vanessa Furlong) are happy to do consultations. We both lead courses for teachers as we

Around the globe…in the UK, Graeae Theatre Company has been working in inclusive circus for almost 10 years. Extraordinary Bodies create and tour outdoor integrated circus work. Circus Eruption has run an inclusive youth circus for many years. Tina Carter’s unFRique Project explores stories of historical and contemporary Disabled circus artists. Kristy Seymour specializes in work with Autistic children and their families in Australia with Circus Stars. Anandam Dance, Femmes du Feu, Lookup Theatre and SoCirc all do great adaptive and inclusive work in Toronto. Michele Frances at Sky Candy in Austin, Texas. Paradisaea Circus Arts in Niagara Falls and Halifax Circus have done the Flying Footless course and are developing programs. There are numerous other companies who are starting to move in this direction. There are also various dance companies and they sometimes explore a “circus side” of things such as Heidi Latsky Dance in New York City, Axis Dance Company and many more.