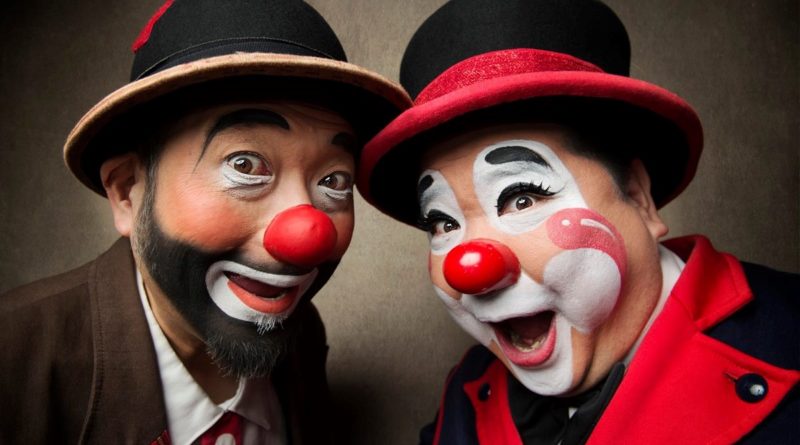 What happens when you take forty of the top clowns, magicians, physical comedians, stilt walkers and balloon artists and set them loose in Shanghai, China? You get lightning in a bottle and a cornucopia of mayhem and laughter. These comedy masters came together this year, the year of the Rooster according to the Chinese calendar, and showed off why they are the best in the business.

My name is James Maltman, and I am a former Ringling Brothers and Barnum & Bailey clown. I toured with The Greatest Show on Earth as a clown, juggler, acrobat and ringmaster for both the Blue and Red Units. For the past 20 years, I have toured the world with various circus shows and productions and have headlined with various cruise ships. I’ve played every venue and stage you can think of. So I was ready and prepared for my adventure when I was invited in September to participate in a special event.

This year marked the 10th annual AEMI Comedy Festival which kicked off September 15th and finished on the 25th. The festival was created ten years ago as a cultural exchange by a Dr. Chris Wang. He had a dream of bringing American style clowning to the East and see what would happen. I was fortunate to be invited the first year and it turned out to be a huge success.

Every year since then, the AEMI festival has grown and with Dr. Wang’s guidance, he has reached out across the globe to bring in different types of talent to China to entertain and share the circus arts.

For 2017 and it being the special 10th anniversary, Dr. Wang invited some of his favorite acts from the past and really stepped up the shows. I was asked to bring a duo act I created and toured with for many years called the Blue Boys. I called on a talented acrobatic friend named Rocco Lapaire of Gravity Entertainment to perform with me. Over a period of two days, forty international performers descended into China in a jet lagged haze but excited to start the fun.

Brenn Swanson, our fearless leader and manager for our ten day run, is a former Ringling Brothers clown and now owner and CEO at Hilario Productions, Inc. based in New Jersey. Brenn has been with the AEMI festival since day one and is one of the most professional hard working people I have ever met in show business. Her dedication and love for the entertainers around her kept the machine running even when she was on fumes working endless hours putting our schedules and show times together.With the help of Liz Bolick and Eszter Marsalko, these three smart and funny women created a safe and calm environment for us and had answers before we had questions. They steered our course and made our heavy schedule bearable and fun.

With talent in place and ready to go, the festival kicked off with most of our performances being held at the  iconic Pearl Tower located in the heart of Shanghai. The opening ceremony was an explosion of LED lights and music on a multi-colored stage set up at the base of the Pearl Tower. State wide media televised the event across China and it was attended by special celebrities and guests, and front and center was our Dr. Chris Wang looking at a mélange of talent that rushed the stage to thank the People of China for inviting us to this celebration.

After the initial rush of getting things up and running, I realized that what also made this festival especially wonderful was that it was a sort of Ringling family reunion. Some heavy hitters in the clown world showed up. My dear friend Greg DeSanto who toured with the Ringling show for ten years, and still bringing the funny, is also the Executive Director at the International Clown Hall of Fame & Research Center based in Baraboo, Wisconsin.

Also some of the top working clowns from the road were in attendance. Rob and Jane Lok of Allez-Oops from New York City turned every performance up to eleven on sound and energy with Jane dancing on bottle tops and then climbing Rob’s shoulders for a two man high dancing on stilts. Ivan Skinfill flew in from Cancun Mexico and brought a juggling skill set that had multiple sombrero hats and balls cascading above our heads. The ever funny Andrew Scharff who is based out of Philadelphia can bring a multitude of laughs with his famous Rubberband Man act and antics and one of the best physical comedic clowns working today from San Antonio Texas, Kirk Marsh. Kirk not only brought his comedic talents but he is also is an award winning photographer and took the time to capture all of the cast on film. I highly recommend you visit his website at www.kirkmarshphotography.com

Another special treat and not just for me but all the Ringling family was a surprise clown guest that came out of retirement to join us. The much loved Ruth Chaddock from Texas. This women’s history with The Greatest Show on Earth and Feld Entertainment goes back forty years. She was a white face when on tour and became very close personal friends with some of the most famous clowns in history. Side by side she use to work and teach with master clowns Lou Jacobs and Frosty Little. After touring with the big show, she moved on to run Ringling Brothers PR department and taught make up at Clown College.

The People of China absolutely adored and loved her and she made them all honorary Texans. You haven’t lived till you’ve seen a crowd of two hundred Chinese people screaming YEE-Haw!

We were also elated to have Michael Goudeau show up for his first time at the AEMI festival. A staple on the Las Vegas scene, Michael worked for 20 years opening and working with Magician Lance Burton. He also wrote and still works closely with the great Penn & Teller.

Ringling definitely made an appearance at the festival but I would be remiss if I didn’t mention a number of other entertainers who brought their skill sets and charm. Andrew Lee from Malaysia wowed the audiences daily with his charismatic style and close up magic and is currently in the finals of the Malaysian version of America’s Got Talent. The clowning and magical skills of Steve Marshall who is from the States but now living in Japan brought a plethora of tricks, gags and sound effects that had every audience rolling in their seats.

AEMI brought in a number of stilt walkers and their costumes soared above the massive crowds. Standouts included Michael Saab and Irene Fong of Modern Gypsies productions. Their creative and ambitious designs added graceful elements to the festival and theater shows.

I also have to mention one individual who brought so much wonderment and imagination to China. A master of his craft and who hails from Ohio and is now a resident of Germany, the fantastic bubble artist Darren Burrell. With his epically waxed beard and his throwback costumed style of an earlier circus era, Darren made you feel as if you stepped into the world of Willy Wonka.

Also representing were several clowns and acts from Europe and Yentown Fools from Japan.  Fede Scoch of Circo Equap brought his troop over for street performances and their intimate theater clowning work captured beautiful moments that wrapped you in breathless harmony with the audience. The character work of Marta Finazzi and Lili Mae wowed the crowds with their silk and quick change routines but for me, hands down, one of the most talented of the European troop was Nino Del Retrete Toylette. Every show with Nino was a master class in improv and interacting with an audience.

After a week of appearances and shows at Pearl Tower, it was now time to assemble acts for our theater shows and move on to another venue at a park named Anting. This was made possible by the vision and talents of Dick Monday and Tiffany Riley from Dallas Texas who both are part of The Lone Star Circus and toured with Big Apple Circus. Founding members of the NY Goofs, Dick is Artistic Director for Laughter League and former dean of Ringling Brother and Barnum & Bailey Clown College.

With a limited time frame, we assembled in a conference room in our hotel and within a few hours pieced together a solid ninety minute show, thanks to the professionalism of our small handpicked performers. A wonderful mix gelling into a unique extravaganza that was presented to sold out theaters over three nights.

The AEMI Festival completed its run at Anting Park and although the weather was a problem at times, the park was actually filled with families and no amount of rain was going to stop us from giving them our best.

Our final performance in the park brought together all of our performers in a jammed packed dance party. Afterwards, we assembled for a farewell dinner and celebration and toasts from our producer Dr. Wang. It’s always sad when finishing a show or run and bonding with so many great friends but I was taught a phrase a long time ago when I first joined the circus. It’s never goodbye, it’s “See you down the road.”

I look forward to seeing all of these stilt walking, balloon sculpting, juggling comedic buffoon’s at the next AEMI Comedy Festival in 2018. Performer, Producer -United States
James Maltman attended the world famous Ringling Brothers and Barnum & Bailey Clown College and toured with both the Blue and Red Unit as a featured clown, juggler, acrobat and ringmaster.After the Greatest Show On Earth, James moved to Los Angeles California and started a successful run as an actor appearing in TV, featured films such as Ron Howard's The Grinch and national commercials and stunts. James also produced and directed his own circus troop called Me'lange with former Ringling and Cirque Du Soleil performers and toured the States as one half of the physical comedy duo Him & Me. James has toured the States, Mexico, Europe and Asia with various circus shows and has played every type of venue for the past 20 years. Now solo, he can be found headlining circus stage shows and some of the largest cruise ships around the world as a featured physical comedian.
You are about to enter a members-only zone.
To share this article on your CircusTalk member page and connect with circus professionals from all over the world, sign up now. It's free!
Sign Up
Already have an account?
Log in

James Maltman attended the world famous Ringling Brothers and Barnum & Bailey Clown College and toured with both the Blue and Red Unit as a featured clown, juggler, acrobat and ringmaster.After the Greatest Show On Earth, James moved to Los Angeles California and started a successful run as an actor appearing in TV, featured films such as Ron Howard's The Grinch and national commercials and stunts. James also produced and directed his own circus troop called Me'lange with former Ringling and Cirque Du Soleil performers and toured the States as one half of the physical comedy duo Him & Me. James has toured the States, Mexico, Europe and Asia with various circus shows and has played every type of venue for the past 20 years. Now solo, he can be found headlining circus stage shows and some of the largest cruise ships around the world as a featured physical comedian.