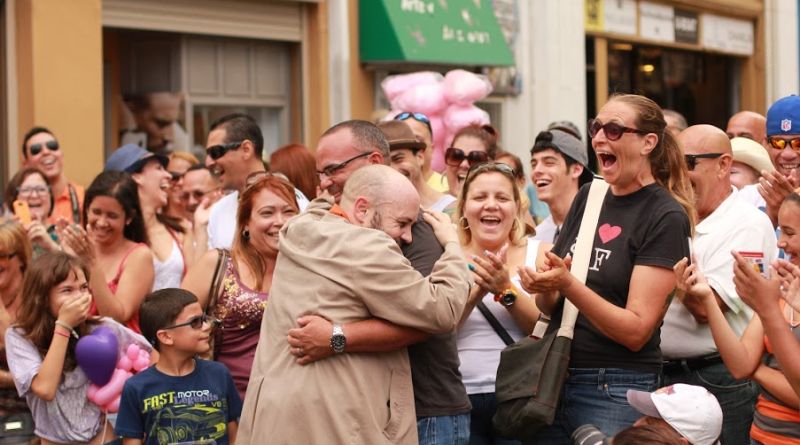 Circo Fest brings acts from around the island and the international circus and street theater community to Old San Juan to perform for thousands of visitors in the cobble-stoned colonial neighborhood that’s the picturesque face of Puerto Rico. For the week of the festival, more than 100 clowns, aerialists, dancers, musicians, contortionists, magicians, and others must be housed, fed, and cared for.

But the last year has been, to say the least, more complicated than usual. For one, that same spring ACirc also took up occupancy of its first physical space, a multi use cultural center now known as El Bastión. Perched high in the northwest corner of the neighborhood, inside a thick-walled colonial complex known as the White House run by the Institute of Puerto Rican Culture, El Bastión now houses a circus training space and a dance studio; it’s home to a Saturday farmers market and nighttime music jams. But when ACirc signed the lease last year, the space – which had been shuttered for eight years — was a mess. It took months of arduous work to get rid of the mold, rip out the ceiling, put in a cistern, and more, all bearing in mind the constraints of rehabbing a historically protected building.

“Recovering disused spaces is something that must be encouraged more,” Rivas told the newspaper El Nuevo Dia, in an article about the opening of the center. “For us, El Bastión should serve as a reference so that, in times of crisis, such as the one we are living in, it can encourage things like this to start happening as something more normal.” The crisis he was referring to then was the ongoing economic crisis, that has starved Puerto Rico’s cultural institutions of resources.

Five months later, I talked with Maxi Rivas in the courtyard of El Bastión in February, about getting back to business after disaster, about the state of Puerto Rican circus, and about why Circo Fest 2018 – at that point less than a month away – was more critical than ever.  An edited transcript of our conversation follows.

Martha: What was it like for you, starting the space in September and then having hurricanes Irma and Maria happen, right afterwards?

Maxi: After Maria everything changed very quickly. The next day, when we came outside and saw what happened – really understood what happened — we said, ‘Wow, we are very lucky.’ In my house for example, the ceiling, came down. But here in El Bastion, we didn’t have too much damage; it’s very solid structure.  So, three days after the hurricane, we reopened and we start to host workshops and different activities for the neighbors, especially all the kids that couldn’t go to school. Because the schools were closed, and the parents needed time to fix their homes, but they couldn’t because they have to take care of their kids!

And at that moment, El Bastion started to become a meeting place. People would come and say, “What do you need?” And someone would say, oh, for example, “I need wood, to close one window.”  And we would say, “Oh, we have wood here.” Everyone was just staying in the neighborhood, because you couldn’t get petrol to move your car, and because it was pointless to go outside to try and find … whatever, because you couldn’t find anything anywhere. So we started to work with the resources we had in the neighborhood, and create workshops in painting, circus, theater, dance. We worked from very early in the morning until the sun went down.  And it went well because the people who came were our neighbors; they are our friends, and they support us.

We went on like this for seventy days, without light. After one month we start to create performances at night as well, and we invited the public to come with solar lights. And we did a lot of things — concerts, plays. We didn’t have food, because we didn’t want to deal with rats. But we had everything else. People needed to play; to be together.

Martha: Did you ever think about canceling Circo Fest?

Maxi: No. No way. Because, we are crazy! And we need more people who are crazy like us, because it’s a good project. People have a very good time when they are part of Circo Fest.  And people know us — they know that we are a little group, with a lot of support from our friends, and they support us with the things that they can. Some people give us money, others give us food, some others give us accommodations. We hope that in time things will be easier, but honestly, we always have a lot of issues to create the festival, and we know that. Because our life is always like this. We are artists! And the life of artists is not easy.

But we think about that a lot — why do we continue? Because,  now we are also producers. We spend a lot of time in front of the computer or talking to people, and we can’t train. I can’t rehearse my plays. I can’t create new things. So we do ask ourselves, “Why?” And what we realized is that CircoFest is our performance. El Bastión is our performance now.  And because of that we said, OK, it’s all good. We can’t create, we can’t perform, but we get to do this — this is our very big performance. And it’s necessary, to pass it on and to push other artists to start projects like this. Because if there are more people like us, then there are more possibilities to work, and to perform and to promote the art.

Martha: So, Circo Fest runs March 10 and 11. What’s on the bill? Who are the international artists?

Maxi: This year we programmed 40 companies, with seven international acts, from Italy, Spain, Brazil, Peru, Guatemala, Chile, and Argentina. The others are from different municipalities in Puerto Rico. And they are all different: dance, music, theater, circus for sure. Before the weekend each company also offers professional development workshops, on things like how to perform in the street, for example, or how to how you can submit or search for different festivals. And then also of course technique: trapeze, cyr wheel, juggling, clown. During the weekend in Old San Juan we start at 11 a.m. and we finish at 9 p.m. and we’ll present around 70 shows each day.

After the festival in Old San Juan, we are going to tour the island with the international acts. We’ll also go to Vieques, and then to Humacao, a municipality that is really hurting because of the hurricane, and to Yauco. And then we come back to San Juan and finish the tour with a performance at the Museum of Contemporary Art in Santurce.

Martha:  For the shows here in Old San Juan, I heard that that the mayor doesn’t want you to perform in the street this year. What’s up with that?

Maxi: Yes, this year is hard because the municipality has other priorities, and because of the hurricane, they say that it’s not a good time to do it [the way we used to].  But we said we wanted to do the festival for the public — it’s free, it’s good shows, and it will help everyone find some joy again.

So because of that we changed the location. Normally, we would be performing all over Old San Juan, in San Francisco Street, in Plaza Colón, and Plaza des Armas. But this year we are going to move all the stages, including three aerial rigs, to this neighborhood, Barrio de Ballaga, which includes El Bastión, plus the Casa Blanca museum, the Institute of Puerto Rican Culture, and the Cinco Centanario square.  It’s a little concentrated, but the spaces are also bigger, so we hope that we can still have a good festival. We still have the support of the businesses in Old San Juan, because they know that we create a good experience, and also that we give the owners the chance to promote their business.

Martha: What’s the state of circus in Puerto Rico right now, in general? Are there many circus schools?

Maxi: Not many – I think maybe five total? But it’s growing. Because of Circo Fest, people are very curious about what’s happening in the rest of the world. In the short time that we’ve been doing the festival — five years  — companies from here have grown a lot. They think more about their music, the costumes, the concept. We [Rivas and Carbonell] moved here in 2012, but before that we lived in Madrid — and in Europe you have a lot of circus, and a lot of very good artists, and, well, I was just a normal artist. But I did “clown without words,” and in Europe this was normal. People understood it. But here it’s different. Here clowns are all loud and crazy. Like, GAHHHH!

But here’s a story: One year we invited a performer from Brazil to Circo Fest, and he had a very difficult act, that involved balancing things in his mouth. That was in February, and then in June I invited a very talented kid, fifteen years old, to work with us, to try and push him to be more professional. We were worried because he was so young. But I talked to him, and he was excited, so I asked him, what skills do you have?  And he answered with a lot of things: “Well, I can juggle with five balls, I can juggle with bouncing balls, I can juggle with clubs, I can do diabolo, I have a silks number.” And then he said, “Oh, you remember the artist who came to Circo Fest? I copied his act.” In four months he had taught himself this very difficult act, all by himself. So that was great.

Here, at El Bastión, it’s not just a place to teach, it’s a place to train and to share. Those of us who train here also teach aerials and juggling, and clown, and acrobatics – for little kids and also with adults. When we opened, the name for the days for training was “Espacio Abierto,” or open place. After we finish Circo Fest we need to start this back up on a regular basis, because people here, they really want to learn. Writer -United States
Martha Bayne is a Chicago-based writer and a senior editor with Cleveland's Belt Publishing; her work has appeared in Belt Magazine, the Baffler, Buzzfeed, the Rumpus, and many other outlets. She is also the founder of the long-running Soup & Bread community meal project, an ensemble member with Chicago's Theater Oobleck, and an eternally hopeful aerialist. For more, see marthabayne.com or @marthabayne.
You are about to enter a members-only zone.
To share this article on your CircusTalk member page and connect with circus professionals from all over the world, sign up now. It's free!
Sign Up
Already have an account?
Log in

Martha Bayne is a Chicago-based writer and a senior editor with Cleveland's Belt Publishing; her work has appeared in Belt Magazine, the Baffler, Buzzfeed, the Rumpus, and many other outlets. She is also the founder of the long-running Soup & Bread community meal project, an ensemble member with Chicago's Theater Oobleck, and an eternally hopeful aerialist. For more, see marthabayne.com or @marthabayne.