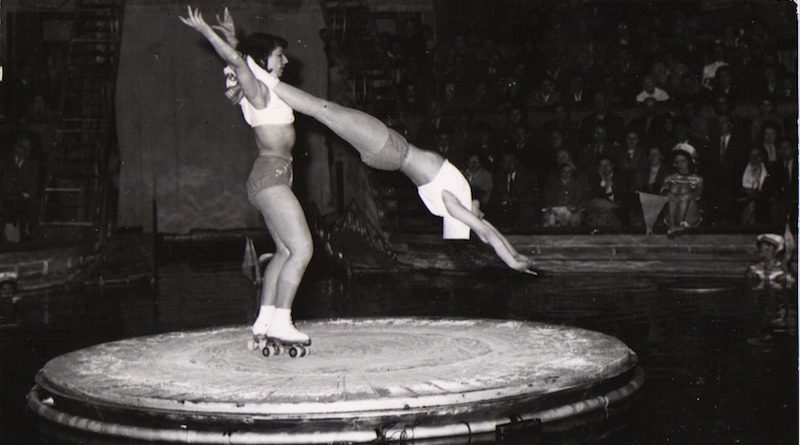 Panni Speirs is a contortion master coach, jazz musician, and motivational speaker who also holds the Guinness World Book of Records title for non-stop exercising (a very impressive 38 hours and 40 minutes!). In addition, Panni was our guest speaker at the 2017 WAS (World Acrobatics Society) Congress. So, we asked Panni to tell us more about her very fascinating life:

How did you first become involved in the sport/performing art of acrobatic gymnastics?

The short answer is: by chance. The longer version is: As a 10-year-old, I spent most of my afternoons (weather permitting) at an outdoor swimming pool, which happened to be located directly across from the Budapest Cirkusz Building. This is a permanent stone building that first opened in 1889, and was remodeled in 1971.

The acrobats from the Cirkusz used to come to the swimming pool before and between their shows, to practice in an open area. A crowd of people typically watched the “free show” – – including me. One day, one of the acrobats asked me if would I like to try some of the lifts they were doing. I checked with my mother, who nodded “yes,” and the next thing I knew, I was lifted high, in a Bridge position. That was my introduction to my future; performing as a circus arts acrobat. After that day, I became a “regular” in this “free show.” Later in August, my acrobatic partner told my mother, about the Circus School that would be opening in September; encouraging her to enroll me in it. And that was the beginning of my new life in professional acrobatics.

What was the most positive experience you had while participating?

During my school years in Communist Hungary, the only positive thing I can think of is that my tuition in the Circus School did not cost any money for my parents. Because I kept earning Government Scholarships for each of the seven years I spent at the school.

In 1958, as a performer with a small group of other variety performers, we traveled to the Soviet Union, as a youth delegation representing Hungary. My partner and I performed both of our acts: Acrobatic-Contortion and Acrobatic Roller-skating. Back in those days, most of the Eastern European countries had never even seen or owned, roller-skates, so our roller-skating act was quite a novelty act. So much so, that in every show, we enjoyed numerous curtain calls with rhythmical clapping applause.

Later, another positive experience was when as a Flexibility/Fitness Instructor, in 1989, I earned my Guinness World Book of Records title for non-stop exercising (38 hours, 40 minutes) – – it was double-positive for me, because I did it on my 50th birthday! I hoped to encourage other people in my age group to stay fit and all the money the event raised went to benefit a local charity organization.

My fitness certainly paid off in another proud moment, surrounding the birth of my son. It was 1981 – – I taught a fitness class on a Saturday, went into the hospital on Sunday, my son was born on Monday, and, the next day on Tuesday, I was back teaching again. My fitness students certainly were surprised to see me there!

What motivated you to become a coach and instructor; specializing in the arts of flexibility and contortion?

I think I am a born teacher. I always enjoyed passing along my knowledge to others, so this was a natural transition from my life as a performer, to that of an Instructor/Coaching.

Around that time in the 1960s, fitness studios started opening in the UK, where I was residing at that time. Based on my experience I got my first job as a Fitness Instructor and was given freedom regarding how I taught the exercise classes.

Coming to the US in the 1970s, I continued my engagements in the Fitness Industry and developed my focus in the area of Flexibility. I also began college studies while in my 50s, so I could back up my teaching with higher education. I earned my AS, BS, and MS degrees in related studies.

For the next seven years, while continuing to teach fitness and flexibility classes, I enrolled in the Eastman School of Music, for their jazz studies courses. You could say, being good in one performing art (acrobatics) led me right into another; because soon I had gigs playing tenor saxophone with local bands.

At some point, my adult fitness students began to ask about flexibility classes for their children. Soon, I had a large class of mostly girls, who were pretty flexible and I taught them the same contortion poses and moves I used to do in my performing days.

I still enjoy teaching, but now I also tremendously enjoy seeing how my “little contortionists” are using what they learned. As they grow up, they make me super-proud of their accomplishments. For example: One has a college diving scholarship, another is a well-known model in New York City and another just received a gymnastics scholarship, the list goes on and on – – it’s all related to their flexibility.

What was it that drew you to the World Acrobatics Society, and join as a member?

I found the World Acrobatics Society online while browsing for something else. Once I read up on the organization, I immediately felt I found the group of people whom I feel at home with, and indeed I do.

Thank you for welcoming me, and letting me become, part of this organization.

Panni’s motto: Have a Happy, Healthy, and Flexy Day!