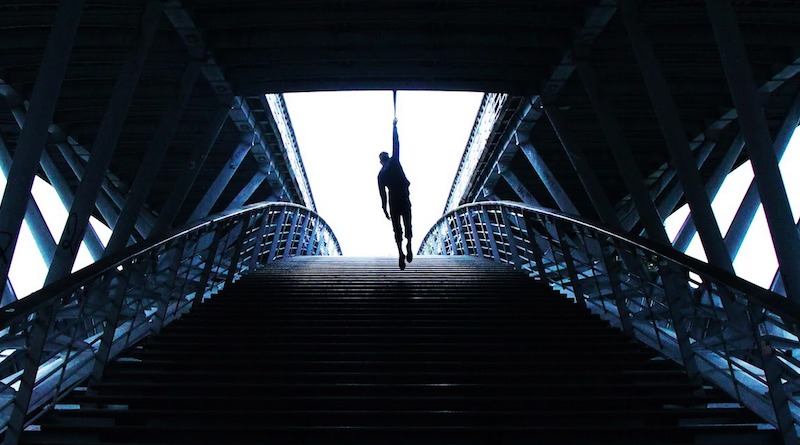 Just over three years ago, Erwan Tarlet left his work to embark on an artistic career. He is 26 years old and currently in his third year at the National Center for Circus Arts (CNAC).

This 2020, he participated notably in the 41st Festival Mondial du Cirque de Demain, causing a bit of a sensation with his decision to abstain from performing his full strap act on the second night of shows, thus relinquishing his chance to win any award. He appeared instead on stage in his pointe shoes with the word Demain written on his chest, and a question mark on his back. He spent the majority of his act in the air simply hanging by one or two arms. Tarlet posted on social media just before he went on stage that he had decided to use the time to  protest instead to raise awareness about the need to act on climate change.

Between straps, points of classical dance and hand balancing, Tarlet tries to combine these different disciplines within writing and committed dramaturgy. In his creations, he says he does not see the circus as an end in itself but rather as a writing tool in the service of a piece, in which circus, dance, theater and all other mediums can be mixed.

Tarlet asked us to note that his act was not the only act committed to raising awareness this year in the Festival, and he encourages us all to learn more about the other participants’ actions as well. For that, you can read Elsie Smith’s article  The Circus of Tomorrow is Full of Surprises for Today  for more details about the happenings at this year’s Festival.

It is no coincidence that this year, three different political, artistic gestures took place during the festival. Art owes it to itself to be be political! Art should not be confused with mere entertainment, with the sort of show that gives the audience exactly what they expected when buying their tickets. I have absolutely nothing against entertainment. In difficult times, there will always be a place for it, but it does not have the same function as art. The latter creates strong and visible images that shed light on the collective unconscious. It allows you to verbalize what everyone feels without being able to express it. It creates precedents and enriches the imagination, thus making progress possible. The point of art is to dispel the fog of the present and clarify the situation so that we can rethink it ideologically.

When I chose to give this performance, I realized that my message would be unclear and that people might find it confusing. That was exactly my intention. My goal was to force the audience to ask themselves questions about what is going on, and to make them talk about it, during the interval or over a period of several days; to give them a vivid mental picture that would continue to haunt them for a long time; to shake them out of their complacency, stop them behaving like consumers, and get them to take things into their own hands. To make the spectator into an actor.

The act itself can be interpreted on several levels, and none of them is the correct or the only valid one. Everyone can read whatever they want into my performance. It encourages people to take time to ask themselves questions about the future. The classical pointes also highlight part of my work in which I address the issue of gender and feminism. And the question of the future does not exclude these questions either.

My goal was to force the audience to ask themselves questions about what is going on, and to make them talk about it

Dramaturgically speaking, the act speaks for itself… a human being hanging onto existence, doing nothing to save his own skin– yet wondering about tomorrow.

Choosing to do nothing in a temple of consumption…

This can easily be interpreted as a critique of society, which remains passive in the face of the climate crisis and the very real problems it creates. Everyone is aware of the latest IPCC report, everyone seems to realize that the threat is ever more urgent, yet no one does anything… Governments remain obsessed with growth and capitalism. For the situation to be resolved in a satisfactory manner, everyone will have to contribute to the war effort and accept sacrifices for the sake of a better future. However, like all fallible humans, we need a legal framework and a systematic, concerted effort that will force us to take drastic measures and prevent further damage.

It would make no sense to believe that the world can change without the circus and, more generally speaking, without the artistic world contributing in some way. If we take drastic measures, transport will have to be considered. It will no longer be acceptable to fly to the other side of the world, or even of the same country, in order to give a single performance. Obviously, planning events on a global scale or organizing world tours will also be out of the question. Many companies have already started thinking about these issues and are considering new ways of reaching audiences.

The world will have to learn to consume locally produced goods. Likewise, performing artists will have to adapt and start working differently.

I don’t want to dwell on the fact that my speech was edited out of the TV broadcast. I think that it really speaks for itself and says a lot about the way the world tries to turn a blind eye to what is happening to us. That is a serious problem. It also shows how difficult it will be to shake up the institutions.

All photos provided courtesy of Erwan Tarlet
You are about to enter a members-only zone.
To share this article on your CircusTalk member page and connect with circus professionals from all over the world, sign up now. It's free!
Sign Up
Already have an account?
Log in