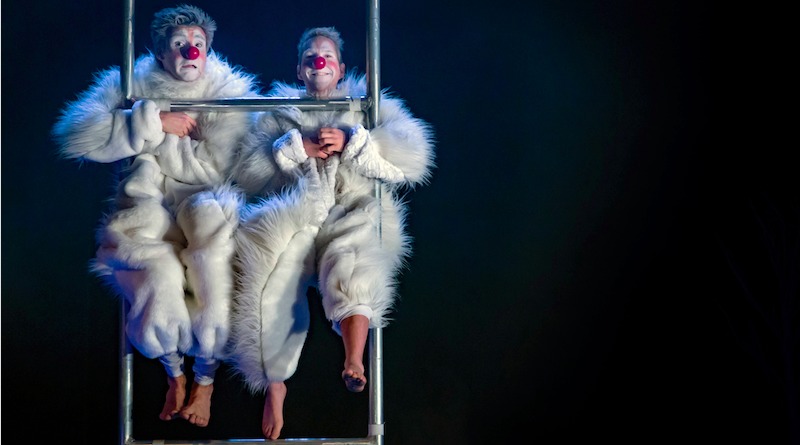 Les Foutoukours is a production company with a special mission to help the world understand clowning and physical theater. Since 1997, co-founders/co-creators Jean-Felix Belanger and Rémi Jacques have been living up to the demands of such a mission by performing a combination of storytelling, theatre, clown acting, dance and circus around their home base of Montréal and beyond, including the Edinburgh Fringe this past August where they performed their two-man show  Kombini.

It’s ACA time–Ask a Clown Anything! Les Foutoukours has just premiered their new show Glob and they assure us that they are “Inspired by many genres and styles for every production, and fight for the respectability of clown art all around the world.” What did you always want to know about clowns and the art of clowning? Whatever it is, chances are they have been asked it by the CircusTalk Instagram followers to whom we sent the invitation this past week to ask a clown anything. Here is what Les Foutoukours has to say in reply…

Audience: What is a clown?

Jean-Felix Belanger: Hooooo…that’s the famous question. It’s hard to do a short answer, but I would say that the clown is a research of fundamental humanity. With respect and love, the clown is there to show our common flaws so we can laugh about them and be relieved. Contradictorily, in our perception, the clown doesn’t want to make people laugh. He reacts to the world in the simplest way, which shows the absurdity of our life and makes us laugh but also cry sometimes.

Audience: What have you learned about teamwork as you progress in circus?

JFB: As a duo, teamwork means everything! We have four full shows as a duo, we are a hand-to-hand duo and we are the directors of the company. We’ve  had to create good teamwork through the years!

You need to build great confidence in your partner to be able to rely on him in every part of your work. It’s like any relationship, the key is to laugh…good news, we are clowns!

On stage, we have one simple rule: My goal is that the other is the best. Make everything possible so that your partner receives all the love of the crowd. Like this, something bigger than us comes out of the duo.

Audience: Why do some people find clowns scary?

JFB: Some people would say that the makeup (mostly the full white face) is scary because it hides something.

We think that it is mostly because the image of the clown has been separated from its goal. The clown has to be done with love, vulnerability and respect to be able to connect with a crowd and show them the stupidity that we all share.

People think that clown is easy, they use the character of the clown without having learned it, practiced it and thought about it. So they rush people and scare them.

All of this plus It, the reboot and the 2nd part of the reboot…

Audience: How is a modern clown different than an old-fashioned clown?

JFB: The clown is looking to reach a universal human nature; this is why old-fashioned clowns are still funny today. Our life context has changed, but it shouldn’t affect the way of doing clown. There are universal themes that make people laugh and cry since the beginning of time!

Audience: What does being a clown mean for you?

JFB: To reach a profound sensibility and a different vision of the world, an artist who wants to be a clown has to apply the rules in their own life! To be a clown is an engagement. As an example, one rule is that a clown can never look at the floor on stage if he wants to be open to the crowd. But in everyday life, we mostly look down when we walk. You have to work hard and force yourself to look up, watch what’s around you, analyse it, be in touch with it, and react to it. Be aware! This will make you grow as a person and as a clown.

To be a clown is to be you, so it takes a lifetime to be a complete clown.

Audience: What does the red nose represent for clowns?

JFB: One of the origins of the nose is the mask from commedia dell’arte. The mask shrank through the years and became as small as a nose. It’s a protection for the artist, as he has to be vulnerable on stage. But it’s also a convention for the crowd who will accept that an artist will show this vulnerability.

Audience: What is your advice for someone who wants to become a clown?

JFB: It will take time! Like we said before, it’s an engagement. You have to work, practice, explore. You have to fight hard to free yourself of a lot of social barriers. To be a clown is to be you, so it takes a lifetime to be a complete clown.

JFB: Most of our best moments as clowns are when we have been able to create a real sensible connections with the public.

One moment that comes to mind is a discussion with a mother after a presentation of Brotipo in Montréal. She had arrived with her two sons in Montréal a few months before. They were from Russia, so they were barely speaking English and nothing of French. Our show was the first show in this new town that she could watch with her family, laughing together, understanding everything, as we don’t use any language. It was a relief for her, a touch of normality in this stressful life change and a glimpse of optimism for her two sons. It was really touching.

We performed all around the world, confirming the universality of clown acting, but not always realizing how it can have an impact in our own hometown as an anchor point for foreigners. It helps to continue the hard work!