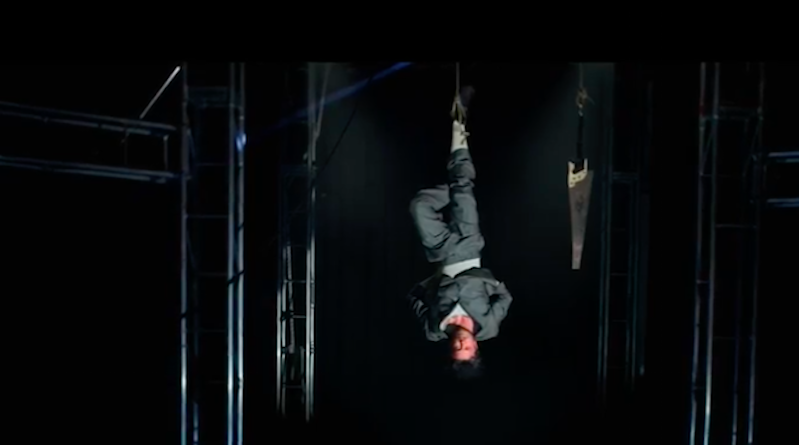 This dark work-in-progress (AutoCannibal) by Captain Ruin (aka Mitch Jones) was what he came up with in creation mode with director Masha Terentieva and sound artist Marco Cher-Gibard. It promises to present a new perspective on what circus can convey, inspired by such diverse influences as the paintings of Francis Bacon, the music of Death Grips, the symbolic language of Slava Polunin, the anthropology of Yuval Noah Harari, the novels of William Gibson and the cut ups of William S. Burroughs. Jones explains, ” I’m interested in performance as research, and with AutoCannibal I am exploring ideas of ecological destruction, resource scarcity, and the human lust for consumption. I’m using the body as a metaphor for the environment in which we live, and creating a character that has been left behind after a post apocalyptic scenario — slowly starving and consuming himself piece by piece. It’s definitely a solo show by the virtue of it’s concept, otherwise I would have had to just call it Cannibal!”

Jones got his start in circus through Circus Oz at age 14 and has since played around with many artistic mediums, including street performance, sideshow, puppetry, performance art, physical theatre, punk bands, and activism. His motto: “Life is an adventure – buy the ticket, take the ride! ”

Currently touring with Circus Oz in Model Citizens, Jones has had to take a break from development of the show, but he plans to continue creation in 2019 with a possible tour in 2020. Describing where and with whom he’d like to perform, Jones says , “For instance, I would really love to work with the Experimental Jetlag Collective who do an amazing circus festival at the huge ADM squat outside Amsterdam. I feel like this show needs to be seen in unusual contexts, down dark corridors, around hidden corners, and underneath dripping ceilings!”