Back to the Future: How Classical Music and Contemporary Circus are Developing New Theatre Audiences in Italy 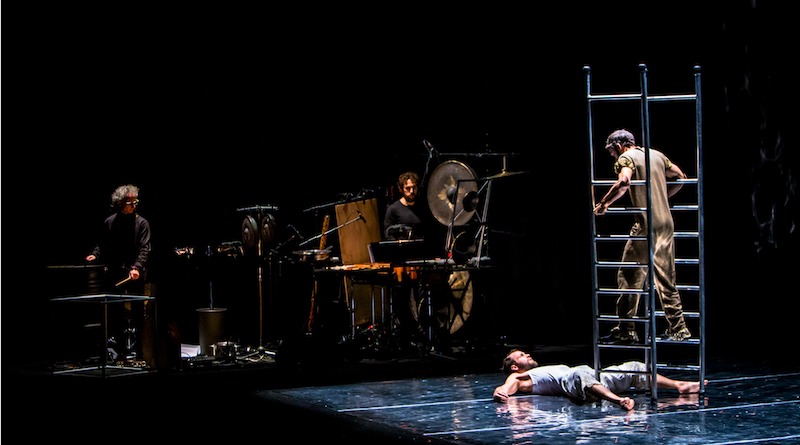 In a country where names like Rossini and Verdi are just a few eponyms of an even greater tradition, the juxtaposition of arches, brasses and woodwinds to floor acrobatics, handstands and aerials might sound a bit odd.  However, a new tendency seems to be opening new perspectives in the performing arts in Italy: the tradition of classical music is blending with the newness of contemporary circus, thus broadening the horizons of Italy’s current artistic panorama.

On the one hand, composers and music institutions are looking for new ways to make classical and contemporary music more approachable to a larger audience, on the other hand are contemporary circus artists becoming aware of the fact that instrumental music can be a great tool to elevate circus as a highbrow form of art. This is even more interesting if we consider that it is happening in a country where the stereotyped idea of lions, tigers and ringmasters still heavily bears on the perception of circus as a theatrical performing art.

Let’s analyse three interesting projects that show how this combo is bringing people to the theatre.

DALL’ALTO is a very ambitious project born from the idea of Milano Musica, an association for the promotion of contemporary music in Italy, and Quattrox4, a contemporary circus organization and with the collaboration of Teatro del Buratto in Milan. In 2018 Milano Musica dedicated a music festival to the writer Samuel Beckett (1906 – 1989) and wanted to produce a theatre show based on his  Act Without Words.The ground-breaking novelty is that contemporary circus was appointed as the key for amise on scenethat could make contemporary music and Beckett accessible to a larger (and younger!) audience.

DALL’ALTO, acclaimed by critics as one of the best instances of contemporary art in Italy, and that is now about to tour among important festivals in Italy such as RomaEuropa Festival, is the first   dramma musicale circense  ever produced in Italy. DALL’ALTO is the story of P., a lonesome character in desperate search for water, who never succeeds in getting to water. As in the best of the Beckettian minimalist traditions, P. is alone but surrounded by weird characters on scene –  are they hallucinations, dreams, real antagonists? Whatever they are, they alternatively help or hinder him in an often absurd and tragicomic atmosphere.

Riccardo Nova, one of the most appreciated composer of contemporary music in Italy, was appointed to write the original musical score of the show by putting into music the movements of the circus actors. He chose to work with two live percussionists and a high technology system of transducers to create a unique experience for the spectators. Seeing the theatrical frame of the project, the contemporary circus artist and director Giacomo Costantini was appointed as theatre director of the piece: his task was to join the music sheet, the theatre text and the movements of the actors. Roberto Olivan, the famous dance choreographer and director of Deltebre Dansa, choreographed P.’s solo (Simon Wiborn), the protagonist in the scene. A specific cast of contemporary circus artists was created for the purposes of this show. Filippo Malerba, executive producer of Quattrox4, chose the circus actors that best fit the Beckettian characters by selecting them from  the pool of contemporary circus artist in Europe. This is how Simon Wiborn (Swede, hand-stander from Svalbard Company), Caterina Boschetti (Italy, juggler for Stefan Sing&Critical Mess), Clara Storti (Italy, aerial rope from Quattrox4 company) and Giulio Lanfranco (Italy, balance ladder artist for MagdaClan company) came to Milan to work together.

Another great artistic experiment born from the joint venture of an symphonic orchestra and a contemporary circus company is the show MasNada – Armonie Nomadi. Defined asOpera Circo  by its creators, MasNada was born from the idea of Annalisa Bonvicini, project manager for MagdaClan company, and Tommaso Ussardi, composer and director for Orchestra Senzaspine. “In raging times of darkness where harbours are being closed and walls built” – said Bonvicini –  “we want to establish bridges between different art forms. Art cannot stay indifferent. We think that MasNada is the proof that beauty can spring from the encounter of diversity. To us it is its best value”.

Written and directed by the contemporary circus artist Alessandro Maida, MasNada tells the imaginary travel to the moon of a foolish composer while trying to write his own masterpiece. The circus artists of MagdaClan play the musical notes inhabiting the mind of the composer – independent, rebelling and disobedient, they do not want to stay on the music sheet and they are driving him crazy. Blending the classical music symphony with new gypsy sounds and a nomadic atmosphere, the circus artists of MagdaClan carried the audience in an unique trip to the moon with their amazing bodies in the scene.

More than 40 people (all under the age of 35) worked at the project: musicians of Orchestra Senzaspine, artists of MagdaClan Company, illustrators, organizers, videomakers. The great operation managed to bring 2000 people on an ordinary Tuesday and Wednesday in Bologna to the theatre . For the company MagdaClan, a contemporary circus collective used to working under a circus tent, MasNada was one of their first appearances in a theatre. And yes – they nailed it!

Born from the mind of Giacomo Costantini, founder of the contemporary circus company El Grito,Gran Circo Rossini  is a new exclusive art form created together with the Pergolesi Spontini Foundation through the juxtaposition of the contemporary circus act with the classical repertoire of the opera. CircOpera is therefore an artwork that wants to emphasize the role of music in circus, the Italian tradition of the opera and a more modern view of the circus in the scene.  Giacomo Costantini, eclectic circus artist with a strong interest in classical music, truly believes that this format can open new scenarios on the Italian panorama. This is why for a few years he has been engaged in the production of this new genre:Caffé Bach(2017) at first, and now  Gran Circo Rossini(2018).

Gran Circo Rossini celebrates the 150th anniversary of Rossini’s death and stars an old Gioacchino Rossini leaving a considerable amount of money to his waiter, Antonio Scanavini in his will .  The waiter, who does not know that in a later letter Rossini had left a postilla erasing his first will, had already decided to set up circus with all of Rossini’s operas and costumes, in order to celebrate his benefactor. Blending different genres (opera, circus and the historical mystery) the baroque atmosphere of Gran Circo Rossini managed to develop new audiences and provided its spectators with a brand new theatre experience that makes opera music more accessible and stars contemporary circus artists in a (classical) theatrical context.

However we call it –dramma musicale circense, Opera Circo or CircOpera– more and more people are getting curious and eager to buy tickets for a whole new theatrical experience. The interesting fact is also that these three experiments are not the outcome of an organic and public policy of top-down national promotion, but singular instances of bottom-up phenomena that in a few years might start to be perceived as a new genre of theatre.

What if in Italy “back to the future” represented a new path to theatre innovation and contemporary experimentation in Italy? Academic, Cultural Project Manager -Italy
Gaia Vimercati (1990) got a MA Degree in Comparative Literature at Trinity College Dublin and a BA degree in Modern Languages and Literatures at the University of Milan. She works as a cultural project manager for Quattrox4, a circus organization based in Milan which promotes contemporary circus through its practice (courses, seminars, residency programs) and its vision (shows, work-in-progress presentations).
Together with Filippo Malerba, she created CENSIMENTO CIRCO ITALIA (2015), the first map of circus companies in Italy. Since 2017 she is the curator of FUORI ASSE- circo contemporaneo a Milano, a showcase of contemporary circus shows organized in cooperation with theaters in Milan. Her main research topics revolve around the relations between contemporary circus and dramaturgy. She was among the contributors of Semiotics of the Circus (2015) and in 2018 she attended the project Research Creation Methods in contemporary circus at Concordia University (Montreal, Canada).
Gaia's profile
You are about to enter a members-only zone.
To share this article on your CircusTalk member page and connect with circus professionals from all over the world, sign up now. It's free!
Sign Up
Already have an account?
Log in