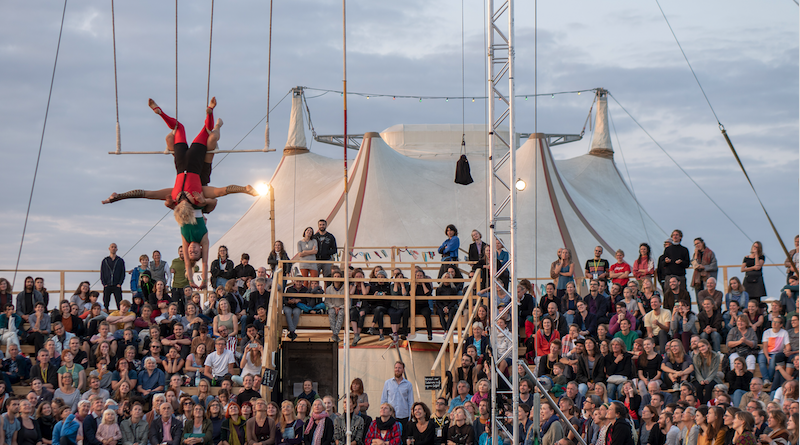 A festival, a hangout, a space created for the whole spectrum of what circus is and might be.

Musing on the Vibe

From August 24th to September 2nd 2018 the circus world once again had a good reason to gather in Berlin, Germany for  “BRLNCRCSFSTVL”. The opportunity to attend was taken by many–with new and familiar faces from the circus world gathering to take part in the 10 days of revelry. For the fourth time the organizers, Johannes Heiliger and Jose Kölbel, really created an inviting space to gather, hang out, meet, greet and of course see circus of all sorts from many angles, making their hashtag #rediscovercircus a viable mission to be accomplished. It was s festival indeed! Somehow Heiliger and Kölbel, were able to transform Tempelhof, an old and unused airport with a full runway,in to something cosy and welcoming. With their new bigtop, they now had three stages, two indoor and one outdoor stage with a wooden tribune and beanbags, which doubled up as a perfect spot to hang out at sundown.

This was not only a space to see shows; with a bar and a food vendor, — it was an inviting destination space to spend the day or even the week.In order to make the space more engaging and interactive, BCF collaborated with installation artists. There was for example a sculpture of a silver dancer, a shadow installation in a shipping container and a colourful area with zickzack benches, painted grass and soft tubes at times occupied by dungaree wearing, painted performers, and other installations by various Berlin Artists.– making a lively and interesting space to meet and greet.

The inclusion of artists talks, residency showings and workshops allowed for much discussion and reflection in that art filled circus space, between shows, music and installations.

With the great variety of different circus performances and approaches to be had, several questions seemed to be reoccuring frequently in conversations after shows: What do we expect when we see circus? What do we want to see? What is circus? Is it a discipline, a skill, a dance with (imagined) risk, an investigation into a certain prop or relationship between people and things put on stage? It tries so hard not to be dance, yet borrows from dance, and not to be theatre, yet borrows from theatre!

For me, this festival often made me wonder what is the thing that makes circus ‘circus’. And while I fail to be able to come to a conclusive answer, I wonder and try to rediscover circus and what circus means. Is it a skill, a performance, the play with risk, creative research into a specific prop? Amongst other ideas, these were some of the notions that stuck with me most. And at the end of the day, was that not the goal all along, to think, wonder and rediscover?

An Art Form in the Making?

Often still deemed as a third world country in the field of contemporary circus, Germany can count itself lucky to have Berlin Circus Festival. One example of how circus continues to evolve in Germany was displayed by the world premier of the Berlin produced show  Ravens by Berlin circus collective Still Hungry (Anke van Engelshoven, Lena Ries, Romy Seibt). I had seen a work in progress showing of it previously and was certain I would have to sit through pain and agony, but to my surprise it had transformed into something energetic, real, and personal. The show had the audience captivated, laughing, sympathising with every mother and her story on stage. With blasting music, thoughtful voiceovers and a compelling portrayal of skill in aerial rope, contortion, Straps and physical theatre, they told their stories about keeping the household together, being a mother while training and performing.

The most touching moment was when all of their children join them on stage at the end while listening to snippets of interviews with the kids explaining their experience of mum performing and how “theatres are too loud” but sometimes they are even “impressed by what mum can do”. How nice to see something develop like that! How nice to see a story told about motherhood and being a circus performer, and how nice to see German circus received so well.

In Germany circus is not yet classified as an art form but as entertainment and as such it struggles to receive state funding for arts making it infinitely harder for the art form to grow and develop. #Rediscover circus, the festival hashtag, was a call to policy makers in Germany to establish circus as an art form, to reckon with circus, and to recognize the multi-faceted nature of this newly developed artform that still has its roots in the old entertainment industry.

That the festival has received state funding for the second time seems to suggest we are on the right path in Germany. In many meetings and conversations around the festival, the need for the state to elevate circus alongside dance and theatre as an artform, and for the growth to be supported became evident.

As part of the Festival, and in the spirit of showing circus from different angles, Berlin Circus Festival not only booked shows but also included workshops, a youth circus showing, an open stage, work in progress and a residency. The residency was space, time and funding given to artists to develop new performances. This year it was Julian Vogel, whose playful, interactive show questioned the role of the audience, challenging us to be interactive to a degree we each had to discover for ourselves, by challenging us to comply or resist the changing rules of the situations he set up. Gathered on stage in a white square, the audience had to try and avoid Vogel´s horizontally spinning, clay diablo. Making way for him or being in the way were rules suggested and implied but open to be experimented with from both the performers and audiences side. It was possibly the best showing I have seen and a great asset for Berlin Circus Festival.

Libertivoire’s  Phasmes was a truly breathtaking piece about the interplay of relationships, whether it be  two humans or for example nature and humans. They combined great hand-to-hand and partnering skills, at times intertwining as a four- legged, four-armed creature, at times leaping onto each other, utilizing their incredible research they had the audience mesmerised and truly touched.

Company Soon’s  Gregarius put two men and their professional as well as personal relationship on display. With a fantastic combination of teeter board and chinese pole technique and playful interaction,  their motions showed the energy that seemed to naturally come out of their relationship. By featuring a floppy body being catapulted by one active sweating body, a set up to a trick and a last minute surprising cop out, they were continuously playing with the concept of interdependence.

Henrik & Louise’s Extreme Symbiosis was a quiet but honest self-reflection on previous work, on ageing and the work that goes into mastering hand-to-hand and partnering. It was great to see two people’s relationship through a continuous video stream of old training and performance videos, as well as in real time on stage. One could see and feel nuances of communication developed over their 10 years of working together, particularly their gripping when positions and tosses would not work as expected.

​Väkevä & Lyddia by Agit Circ was a double bill of two solo performances that’s venue (a geodesic dome) lent it an intimate feel. Lyddia embodies an adaptation of aerial disciplines. The dome as her prop, she explored the possibilities of her body and the structure. However the most impactful moment was when she shredded the dome’s cover, revealing blue sky where moments before it had been blacked out, creating a real feeling of expansion.

​​​Väkevä  explored the history of circus and the image of “strong man”. In a lecture or story telling scenario, he explained and then showed some of the most famous strong man stunts such as lifting a person with the strength of your jaw, biting on a piece of leather and hoisting up the attached fabric wrapped around an audience member. Both performances produced a nice feeling of realness and immediacy, of being physically and emotionally close to the performer.

With so many different things to see and experience, the Festival stayed true to their mission of programming a wide variety of shows, making the audience rediscover circus from all angles. The German and French press respectively each covered the Festival, capturing some of its charm an variety. All in all, Berlin Circus Festival created a space to return to, sparked interested for the scene and hopefully put Berlin on the circus map. Circus Artist -Germany
For the first 20 years of her life, Sophia lived and breathed football life. After playing professionally for a year in her late teens, she moved away from football and was enticed by other movement practises.
Hula hoop and circus paved the way to to aerial acrobatics, which she started at High Top Circus in Brighton. After having studied circus at Die Etage in Berlin, she started performing and is now involved in performance and non performance related projects within the circus field.
Sophia's profile
You are about to enter a members-only zone.
To share this article on your CircusTalk member page and connect with circus professionals from all over the world, sign up now. It's free!
Sign Up
Already have an account?
Log in

For the first 20 years of her life, Sophia lived and breathed football life. After playing professionally for a year in her late teens, she moved away from football and was enticed by other movement practises. Hula hoop and circus paved the way to to aerial acrobatics, which she started at High Top Circus in Brighton. After having studied circus at Die Etage in Berlin, she started performing and is now involved in performance and non performance related projects within the circus field.