Can Cirque du Soleil Bounce Back on Shaky Ground? 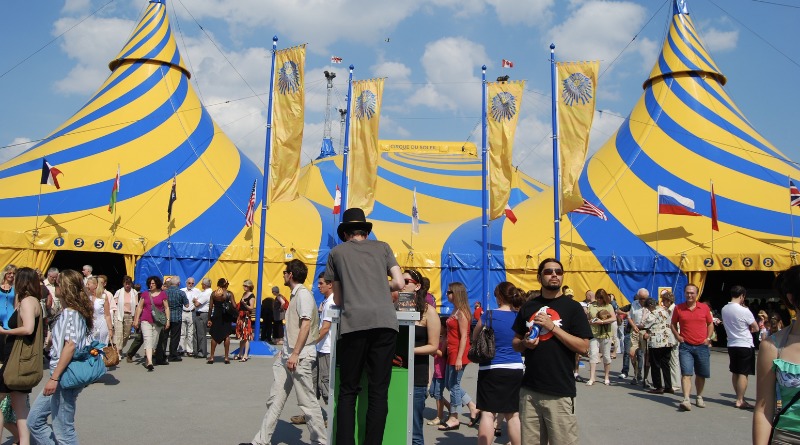 There have been a series of seismic announcements in the circus world in the past weeks in response to the coronavirus, with circus performers and companies immediately losing their contracts for the coming months and the instant closure of performance venues and circus festivals around the world. But no shock has been quite so large as the devastating news on March 19th (just seven days after announcing its temporary halt of all touring shows) that Cirque du Soleil, a company with over 4,600 employees, would be laying off 95% of its staff worldwide temporarily.

The alarm bells quickly rang again, followed by the information from Reuters that Cirque Du Soleil was considering bankruptcy (March 26th). This was quickly followed up with rumblings about the restructuring of debt, and Cirque du Soleil, normally such a private company about its internal affairs, was suddenly the topic in more than a few financial publications, all eager to make sense of how such a behemoth corporation, with 35 years under its belt and 50 original shows in its repertoire suddenly could be brought to its knees after a few weeks of poor ticket sales, followed by a projected month or two of no ticket sales.

Although Daniel Lamarre has consistently struck an optimistic tone throughout the unfolding of all events, the changes certainly shook the confidence of smaller circus outfits around the world who look to the company as both a guiding star and a barometer for the industry. The story of how things unraveled is quite complicated and involves more factors than a deadly virus, but can be partially pieced together from a series of reports over these past few months.

As recently as August and November of 2019, Cirque du Soleil was confidently announcing news shows and attractions, including a Disney production in 2020, a permanent show in Berlin, Germany and a new dinner theater attraction in Mexico.

But signs of restructuring and weight from corporate and investor debt started to show before the coronavirus even took hold, with the Montreal Gazette reporting in December of 2019 that Cirque du Soleil had laid off 53 employees for productivity and reorganization purposes.

As the coronavirus outbreak grew in China, the company announced on January 23, 2020 that it would suspend performances (in Hangzhou) of their new resident show X, The Land of Fantasy due to the rapid spread of the COVID-19 virus in the region. About 200 people were working on the show at the time, including 13 Canadians.

For unrelated reasons having more to do with a lukewarm reception, Cirque du Soleil announced (on February 28th)the closing of their new Las Vegas show R.U.N. at Luxor. The closing was to take effect the same week on March 8th. Channel 3 Las Vegas news shared a quote from the statement, released by Cirque du Soleil “Many avenues of creative options were explored to enhance the existing show, but the resources and time needed to make these changes proved to be obstacles too big to overcome.”

On March 6th, the Montreal Gazette reported further on the R.U.N. closing, delving deeper into Cirque du Soleil’s mounting list of nixed plans and shows, stating “The Montreal-based circus has also cancelled the Hong Kong tour for the show Amaluna, which was supposed to be taking place in May.” In the same article, the Gazette states “Lamarre confirmed rumours that for the past six months, Cirque du Soleil has been contemplating a public-share offering, but that is off the table for the moment given the turbulence of financial markets.”

In that same article, reporter Brendan Kelly’s focus was on a purported crisis in creativity,  “There are also serious creative problems plaguing Under the Same Sky, the Cirque show that is set to have its world premiere under the big top in the Old Port in Montreal on April 23. Executives at Cirque du Soleil were not pleased after a preview performance at Cirque headquarters in St-Michel last week.”

So, on the surface, the cancellation or postponement of four planned shows in a matter of a few weeks seemed as if it could be as related to the economy as it was to timing, creative vision or the coronavirus. But the coronavirus seemed to be the tipping point for Cirque du Soleil, with the closure of all touring shows announced on March 12th, and the layoffs announced on March 19th. It is by turning to the financial publications that a fuller picture emerges of how inter-related all of these factors were.

On March 26th, Reuters laid out the company’s decline in credit rating, stating, “Moody’s Investors Service earlier this month cut Cirque du Soleil’s credit rating deep into junk territory and said there was a ‘high risk’ the company would default on its debt. Canceled shows this year are expected to result in steep financial losses for the company ‘with limited prospects for a tenable capital structure thereafter,’ the ratings firm said in a March 18 note.”

A similar report on Yahoo Finance reported on S&P Global Ratings which “cut the company’s rating to D on Friday, saying that it believes the company failed to make principal and interest payments due March 31 on its first-lien credit facility and an interest payment on its second-lien facility.”

Yahoo Finance also weighed in with similar numbers, stating Caisse was “buying out founder Guy Laliberté and supporting the company as it emerges from a string of recent acquisitions including Blue Man Productions and VStar Entertainment Group….putting it on par with Shanghai-based Fosun International Ltd, while private equity giant TPG retains its share of roughly 60%. Caisse manages more than C$340.1 billion ($240.5 billion) in net assets.”

The Wall Street Journal Podcast The Journal reported on Cirque du Soleil in an episode titled The Next Coronavirus Financial Crisis, explaining how through its various acquisitions and investors Cirque du Soleil has managed to take on the $900 million in debt through  leveraged loans, a type of loan that is given to companies that already have either a significant amount of debt already or a poor credit history.

According to the Journal’s reporter Matt Wirz, these high-risk leveraged loans make companies more vulnerable. Wirz explains how Cirque du Soleil went from a small group of circus artists to a huge moneymaker when Laliberté sold the company for 1.5 billion dollars in 2015 to investors. Wirz says when the private equity firms bought the company, they themselves borrowed hundreds of millions to do it. Loans and interest were easily being paid off with shows raking in profits, and so Cirque du Soleil expanded, buying more companies like Blue Man Group, and borrowing more money. As debt increased, so did risk and the interest rates associated with them, which Wirz said has led them further into debt.

For a company that relies so heavily on live performance, tourism and leisure money, the future looks uncertain indeed, but if the circus sector is looking for optimism, they need only look as far as company CEO Daniel Lamarre, who recently spoke to The Globe and Mail about the companies plans going forward. Lamarre told reporter Nicolas Van Praet that the strength of the brand would save the company because “We are one of the most amazing brands in the world. No investor with a straight mind will let it go.”

Beyond working out a deal with investors, Lamarre says Cirque du Soleil has a plan to reopen in carefully selected markets, as the coronavirus wanes in certain areas. Van Praet says the companies many shows (10 resident shows, 13 touring shows and 21 shows under affiliated brands) gave it little room to keep cash on hand despite the high level of profit. Las Vegas for example, accounted for ⅓ of Cirque du Soleil’s revenue.

According to Van Praet, Lamarre said once the company’s work of repatriating 2000 employees from 30 cities around the world was done after the layoffs, the core team started planning for the unique operational challenges that they may encounter of restaffing the shows while accomodating any existing travel restrictions. Regarding bringing Las Vegas back on line, Lamarre told Van Praet it would take three weeks once everyone is back on the ground. He thinks the company will likely focus on 10 different super markets to recover, and will decrease their development of new shows while getting set up again.

Another hopeful sign was a statement from Quebec’s economic minister Pierre Fitzgibbon who told reporters at LeDevoir “We are looking at a financial intervention to allow Cirque du Soleil to get through this period without shows,” then further adding his vote of confidence in the company by stating “In the case of Cirque, we will be involved. Cirque is a company that made money before the crisis and will make it after.”

Although Lamarre stressed to Van Praet that there will be a careful, calculated re-entry into the performing arts market for Cirque du Soleil, he also explained how once a show surpasses 50% capacity in the audience, every ticket is pure profit. But will the same be true if there are only a third or half of the shows running in three months? Will the headquarters staff and artists eventually be fully reinstated? Will Quebec and investors step up to keep operations funded until then? These are questions circus people are asking themselves as they wait out the coronavirus, hopeful to return to a circus sector that proves itself resilient enough to bounce back.

Ever conscious of its image and the deep need from the circus community and fan base for reassurance, Cirque du Soleil lost no time in reinventing itself, launching a digital content hub called CirqueConnect on March 27th. CirqueConnect premiered its first streaming content, a 60-minute special, featuring moments from its shows KURIOS, O, and LUZIA. It was a testing of the waters….are audiences still hungry for circus? Van Praet reports that the first streaming of the show yielded 6.3 million viewers on social media networks and 7 million on their website, which was a heartening sign to Lamarre that their brand is still strong among the fanbase.