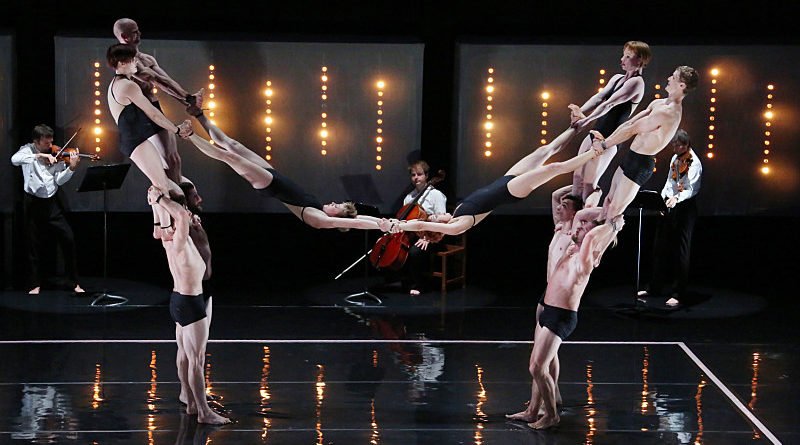 This multi-disciplinary event drew 1,300 participants from 40 countries and presented over 150 shows, including a strong circus element.

This past November marked the 30th anniversary of CINARS—a multi-disciplinary performance art biennial that draws international exhibitors in dance, circus, theater, and music to the heart of Montreal. The stage gives life and visibility to a range of progressive works, while the conference portion sets up networking opportunities to bolster strategic planning in the international tour circuit. With non-stop “Official” and “Off-Cinars” programming, it’s a dizzying week of hot-topic professional workshops, 25-minute excerpts, full-length features, and an exhibition hall featuring over 130 companies. Presenters and practitioners exchange thoughts on artistic trends and environmental and social conditions affecting global markets, audiences, and artists. Repeat participants seem to value the city’s distinct international feel, the biennial structure, which leaves more to be discovered, and the scale that keeps city navigation easy and conversations intimate when held against comparable events such as New York’s APAP.

Among the workshop highlights, the “Inside the Minds of Programmers” panel provided unique insight on “who books what and why,” with concrete perspective from seasoned veterans on various priorities in a dynamic environment. Marcela Diez Martinez, artistic director of Festival Internacional Cervantino (Mexico), fondly refered to her job as “puzzle making,” balancing the vision of artists with the costs and realities of audience attendance and local economies. Paul King, co-founder of the USA’s White Bird described it as “spinning plates,” finding the center of gravity, and stressed that his company’s 18-year history has seen a growing need for adaptation, new partnerships, and methods of community engagement and an increase in small scale, interactive, and site-specific work. Lee Jong-Ho, director of Seoul International Dance Festival, stressed the social role of dance as a new key issue, while pointing out the need to balance imported cultural diversity to inspire choreographers with opportunities to nurture their craft’s development. Similar motivations were reflected globally, and shared concerns meet at the juncture of maintaining a balance between costs and scale, building trust with the public, upholding strong aesthetic and production values, and collaborating with other programmers to create geographic circuits that better support artists.

One has something to gain from either attending or participating in any of the workshop offerings. A “Pitch Session,” for example, invited companies to present new works looking for partners, producers, or artistic or financial backing—an interesting perspective whether one seeks to participate, support, or merely take in a slice of creative process. Of the eight companies represented, two were circus: Nofit State Circus (UK) and 7 Fingers of the Hand (Canada). Their voices represented different ends of the artistic spectrum, with NoFit emphasizing its relation to traditional circus lineage, while 7 Fingers moves forward with reality-based projects that more closely resemble visual art authenticity values and a desire to merge skill and conceptualism. It’s my impression that at a conference this diverse, both projects were well served.

As expected, the range of circus on stage demonstrated broad perspectives, kicking off with 7 Fingers of the Hand’s Cuisine and Confessions, which served as the first full-length feature and an introduction to the local scene. Showcased in the world-class circus venue TOHU, 7 Fingers features impressive athletes, virtuosic skill, and youthful dynamism exemplary of the city’s high level acrobatic culture, while continuing on-stage interactive experiments and themed storytelling projects that wed the personal and universal. What seems to be a trend in quick-turnaround process shows in refinement, but also results in a working method that allows the company to be nimble, to allow unique collaborations, and to quickly address art and market trends. And while the inclusion of personal narrative can be inherently as messy as it is beautiful, it in fact reflects post-disciplinary art in the age of democratized media, where individual voices converge to form a new kind of fast-paced collectivism. Ironically enough, this return to storytelling reaches back to the most rooted form of human connection, far before the written word, let alone circus.

To draw a comparison with fellow Montrealers Flip Fabrique, who presented part of Catch Me, we saw the local taste in clean acrobatics and youth culture that qualify the show as family-friendly spectacle, but without the layered interest. Andreane LeClerc’s off-Cinars presentation of Cherepaka represented the opposite side of the coin with a viscerally captivating contortion solo inspired by metaphysical inquiry and visual art that deconstructed form to explore human desire and representation. This was certainly one of the more sophisticated approaches I’ve seen positioning circus in relation to critical theory and the contemporary avante-garde. What LeClerc gives up in generalist marketability is made up for in art world appeal, one of the exciting new horizons in contemporary performance.

From the opposite side of the world, Australian theater produced a universal level of polish as evidenced in the work of Tom Flanagan’s Kaput and Opus by Circa Contemporary Circus and The Debussey Quartet (France). The former does so with clever, slapstick circus comedy, while the latter is perhaps the most seriously considered and accomplished work of group acrobatics ever made. Through the music of Russian composer Dmitri Shostakovich, the company explored darkness and light with unrelenting depth and fluidity, a sort of choreographic chiaroscuro that subverted expectations, pushed boundaries of the possible, and displayed raw humanity at its best and worst. Its moods were subtle, layered, and intricate; its music impeccable. While in many ways the company’s work owes its formal debts to modernism and minimalism, the story aspect came through in the flow between individual and universal themes illustrated in roughly separate tableaux. What began with a lofty, formal aerial solo, grew to cover the full range of human weight bearing and relationship, leaving us with a form of collective that demonstrated strength and unity without masking scars.

As for the overall picture, which was far too expansive to absorb in its entirety, Cinars is well worth the scramble to cover a wide sense of performance art present and future. With such a large array of world-class practitioners in one place, brought together in a thoughtfully led and curated mix of interactions, one can certainly find what is sought and what has yet to be discovered.