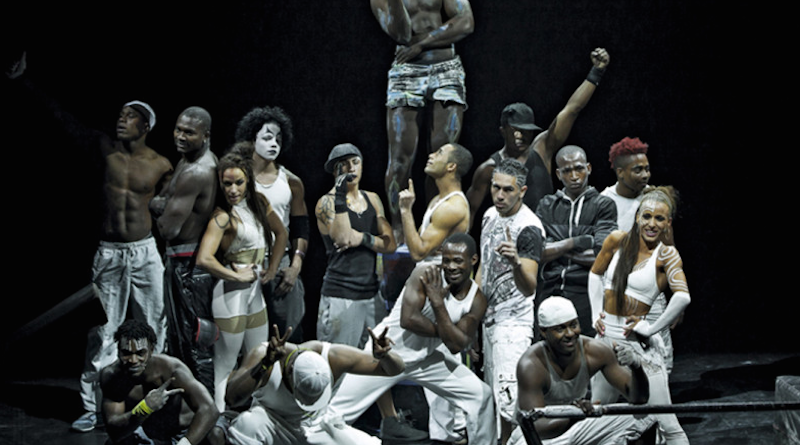 Around the world, we are in the midst of a circus education revolution. After centuries of circus know-how being passed from generation to generation or shared via apprenticeship, institutions dedicated to circus learning are emerging rapidly. In this special series, Amy Cohen explores institutions around the world that are contributing to the professional circus field via their role in the education and inspiration of young artists.

In 2010 I was sitting around a table at the Roundhouse, a London venue dedicated to producing the hottest performing arts while focusing on supporting young artists and social change. I was taking part in a one day social circus conference that was paired with a performance by Circolombia, a professional touring circus company from Cali, Colombia. The show was sold out.

A month previously, a favorable and admiring preview of Circolombia had been published by the Telegraph. As we were sitting around the table discussing social circus, Circolombia’s fiery and passionate founding director and creative producer Felicity Simpson was in a fit of rage over the article. The headline was all wrong, she said. It was the same problem over and over again. The title read “Circolombia: From Street Urchins to Circus Stars.”

The article that had enraged Felicity was written by a reporter who had traveled to France to shadow Felicity as she was creating the acclaimed show Urban with a group of 17 young artists from Cali. It just so happens that these young artists are from a community that has four times the murder rate of Chicago—a rate that is actually a 50 percent improvement from the 1990s, when the leading cause of death in Cali was homicide. The city has a passionate and revolutionary mayor who is responsible for that decrease in crime, and it has a circus school.

Ironically, the article itself highlights why Simpson was so upset by the headline: “If ever we get a public giving money to the ‘poor little things,’ that would muck up everything. We’re marketing talent, not poverty. I want people who come to Urban to see a bloody brilliant show, with an energy that you can feel in the back seat.”

The model of Circolombia is one worth exploring in detail because it specifically aims to engage “disadvantaged” young people in professional training so that they can have careers in circus. The majority of social circus programs around the world tend to focus on the life skills that participants develop through circus, not on the creation of professional performers. The Circolombia model involves two distinct organizations: Circo Para Todos (Circus for All), an educational institution based in Cali, Colombia, and Circolombia, a production company based in Europe. The two are directly linked via a clear trajectory to bring students through Circo Para Todos and into Circolombia for professional work. So how does a young person from the streets of Cali handspring their way into London’s iconic Roundhouse? The first step in the model, created by Felicity Simpson and Hector Fabio, is community workshops. Workshops are conducted in Cali (Fabio’s home city) in two distinct environments: child welfare organizations and open-air sites called invasiones, which are neighborhoods where displaced families reside. Instructors who “have the same background as the children” conduct workshops for five hours per week for a six- to nine-month duration. To ensure that there are plentiful teachers for community outreach, formal teacher trainings were developed with the National Circus School of Montreal.  After the workshop session is completed, the young people have the opportunity to audition for the professional circus school.  At once the community workshops are a social circus program and a tool to scout artists who want to take their interest in circus to the next level.

The professional school was founded in 1997, just two years after Simpson and Fabio formed the organization with a grant of 250,000 pounds from the UK National Lottery (subsequent funding has come from a variety of European and South American sources). It is a four-year university degree in circus arts housed under a big top with a curriculum modeled after the circus schools of Europe and Canada. Where the professional school differs from those programs is the fact that it is dedicated specifically to the “socio-economic and cultural integration of disadvantaged children and adolescents, developing students to the highest level of international circus.” Since the first class graduated in 2001, all 101 of its graduates have found professional work in the circus. Once students go through the school, they are ushered into Circolombia, a professional agency that produces touring shows (most notably Urban), creates site-specific productions, and designs custom performances for festivals and cruise ships. The agency puts half of its profits back into Circo Para Todos, enabling the cycle to continue. Circolombia currently has 85 artists on hire. Twenty-five individuals who have been through the school and are now professionals have purchased homes for their families in Cali thanks to the success of their circus careers.

The Roundhouse has played a pivotal role in generating excitement and support for the professional productions that Circolombia produces. The London theater invested in bringing Circolombia to the UK in 2010 and has since included it in a variety of festivals, even commissioning a new piece for the April 2015 Circus Fest. Circolombia now performs all over the world.  Descriptions of its work are carefully worded to direct focus towards the highly skilled performances that reflect personal experiences and come from living life on the edge. A critic from the Evening Standard commented that: “There is a visceral rawness that makes Circolombia so appealing and the antithesis of the technically perfect Cirque du Soleil.”

The model that Simpson and Fabio have set in motion is brilliantly sustainable and has directly inspired similar models in Chile, Argentina, Brazil, and South Africa. They have paired a long-term committement to community activism with a built-in pathway to a professional training school that produces professional artists and then hires them. Funding the school with profits from the professional company, which come in mainly through the European market making exchange rates favorable, ensures Circo Para Todo’s financial viability. And, let’s not forget the high level, edgy, and original circus that is being created, produced, and presented around the world. Educator, Writer -United States
Amy Cohen is the executive director of the American Youth Circus Organization. She has a bachelor's degree in theater arts management from Ithaca College and a master's degree from New York University in "Circus as a Tool for Social Change, Education, and Creative Expression." She also studied contemporary circus in the United Kingdom as a Fulbright fellow.
You are about to enter a members-only zone.
To share this article on your CircusTalk member page and connect with circus professionals from all over the world, sign up now. It's free!
Sign Up
Already have an account?
Log in

Amy Cohen is the executive director of the American Youth Circus Organization. She has a bachelor's degree in theater arts management from Ithaca College and a master's degree from New York University in "Circus as a Tool for Social Change, Education, and Creative Expression." She also studied contemporary circus in the United Kingdom as a Fulbright fellow.