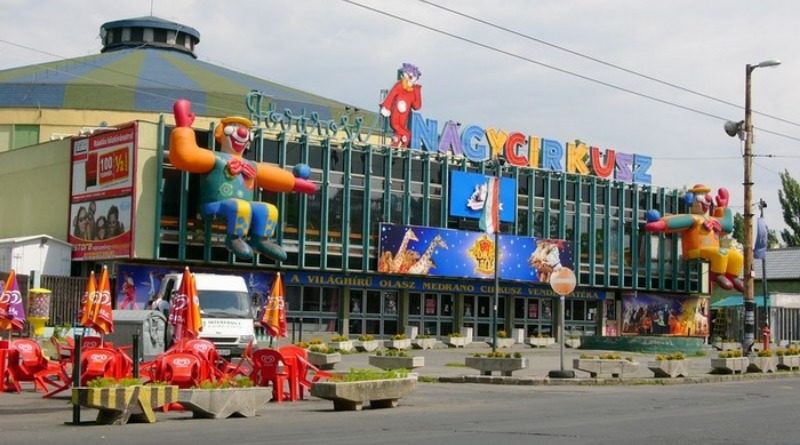 The circus building in the heart of Budapest celebrates its 50th anniversary. The pandemic and COVID restrictions haven’t stopped the Hungarian circus community from commemorating this iconic building. Its fascinating 131 years history has always been shadowed by politics and the history of turmoil in the Central European region.

It all started in the Austro-Hungarian Empire in 1889, when the German-Dutch circus director, Ede Wulff, opened the first circus building in the Budapest City Park, accommodating an audience of  2,290 people. He built an iron-framed structure covered with tin sheets, avoiding wood for fire safety reasons. Six years later, Wulff handed over the lease of the City Circus to the neighboring Zoo.

Matvej Ivanovics Beketov, clown, equestrian, and entrepreneur, took over the lease in 1904 and renovated the building at his own expense. The building for the next 30 years was called Circus Beketov. Sándor Könyöt joined Beketov as co-director in the 20s.

In 1935, the circus building was up for lease again when entrepreneur György Fényes won the bid. In July of 1936, the opening night of the Fényes Grand City Circus was a huge success, showcasing the most acclaimed artists of the time, such as Gábor Eötvös, musical clown and a soon-to-be multiple prize and award winning recipient.

The Fényes Grand City Circus operated until 1943, because in 1944 the City of Budapest refused to issue further license due to the increasing bombings in Budapest.

In July 1945, the circus resumed its operation for only a few more years, because right after the Soviet communist occupancy, in the early 50s, the Grand City Circus was nationalized. The newly formed National Circus Company, called Hungarian Circus and Varieté Company, was founded in 1954. The Budapest Capital Circus became part of the new government-led organization, as it is still to this day.

In the late 60s, the national circus company initiated a development project that destroyed the iconic but old and structurally unsafe building and built a modern circus building, following the Russian architecture style of circus buildings.

On January 14th, 50 years ago, in 1971, the Budapest Capital Circus opened its brand new building with 1450 seats, under the direction and leadership of the only female circus director in the country’s history, Maria Eötvös, a descendant of the recognized Picard circus dynasty.

During the modern history of the building, the Budapest International Circus Festival’s launch in 1996 – by then director, István Kristóf — brought further recognition to the country’s vast history in circus arts.

To preserve the circus arts tradition in Hungary, the Hungarian Circus and Varieté Company’s current leadership is advocating for an over 25 billion HUF (~70 million EURO) capital development project of the Central European Circus Arts Center.  The project intends to rebuild the circus at a different location in Budapest, and add a school and training facilities to the complex.

The Hungarian Circus and Varieté Company celebrates the Budapest Capital Circus’ 50th anniversary with special programs extending into the spring. There will be a one-time gala show starting at 7pm CET on January 14th that will also be live-streamed online for everyone to enjoy. The gala program will be preceded by the presentation of Volume 6 of the book series, which provides insight into Hungarian circus artists’ lives, called “Circus Wondermen – Interviews with Circus Artists,” commissioned by the National Circus Arts Center. The new spring program at the Budapest Capital Circus’, called The Dynasties will also support and pay tribute to the national circus arts and local Hungarian artists. From February 13th to April 18th, over 70 Hungarian artists will take the stage in a rotation manner, which will provide a rare opportunity for the audience to see local artists and much needed support and job opportunity for the local artists community. Co-Founder -United States
Andrea, Co-Founder of CircusTalk, is a fifth-generation member of a European circus family. Prior to CircusTalk, she worked in advertising and in performing arts management, and among others she was Assistant Producer at Lincoln Center’s family series “Reel to Real” in New York City. Andrea holds a BA in Business Administration and an MFA in Performing Arts Management.
You are about to enter a members-only zone.
To share this article on your CircusTalk member page and connect with circus professionals from all over the world, sign up now. It's free!
Sign Up
Already have an account?
Log in

Andrea, Co-Founder of CircusTalk, is a fifth-generation member of a European circus family. Prior to CircusTalk, she worked in advertising and in performing arts management, and among others she was Assistant Producer at Lincoln Center’s family series “Reel to Real” in New York City. Andrea holds a BA in Business Administration and an MFA in Performing Arts Management.

January 22, 2021 Projet Lumiere ProjectComments Off on The Pivot: Episode 3 – Can’t Stop an Artist From Being an Artist with No Stage No Problem

Coproductions in Theater, Contemporary Circus as well as Puppetry