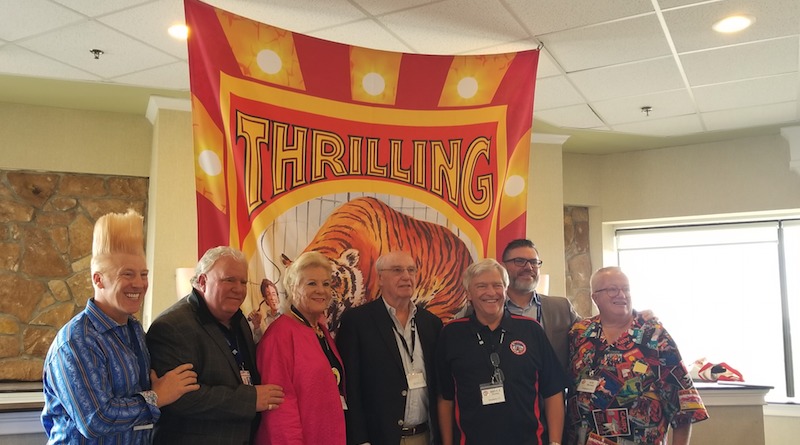 In a circular ballroom on the twelfth floor of Springfield’s La Quinta hotel with a stunning view of western Massachusetts, over one hundred dedicated members of Circus Fans of America (CFA) gathered for a three day celebration at their annual convention. Founded in 1926, the Circus Fans Association of America was created to give support to traveling circuses and circus performers. Now with around 2,000 members and less than a decade shy of one hundred years later, their brochure touts unwavering dedication to this mission, stating “The Circus Fan will do their utmost to create a true understanding and appreciation of the educational, historical, cultural and recreational values of the circus, with or without animals.”

Local chapters of the CFA are called “Tents,” which are named after living or deceased circus owners, producers or performers. Tents schedule local events that usually coincide with circus performances. Sometimes CFA members will be on hand with coffee and donuts when a circus arrives in a new town. Members will attend a performance as a group and then might invite the circus employees to a luncheon. Many members also work with circus schools through CFA’s Circus 4 Youth.

Membership includes a subscription to the CFA’s publication, White Tops, which includes articles, reviews and beautiful photos of circus events around America and abroad. Due to its longevity, White Tops is an important and living archive of traditional circus information. The organization welcomes all circus professionals and fans to join. And indeed, it will likely take an expansion in membership across generations and genres to ensure that this organization continues to provide support for traditional circuses and camaraderie for circus fans of all kinds.

The convention opened with a buffet dinner. Long hugs between old friends and broad smiles peppered the room. Outfits were adorned with spectacular accessories: a feather in the hair, striped jackets, gold studded boots or a vest of clown faces. As we passed serving tongs at appetizer tables, the regional accents gave away that folks hailed from all over the country. Mixed in among the fans were circus legends, owners, producers, authors and historians. The breadth and wealth of experience and know-how in the room was astounding. In the background, four screens played slide shows of circuses past and present. Down the hall, a second room was packed with circus swag for sale: buttons, books, model trains — you name it, it was there. It was a traditional circus enthusiast’s playground! And the food was good.

Bright and early at 8am on a Thursday morning, the legendary animal trainer, eighth generation circus performer and now circus agent, Jeanette Williams kicked off a day of panel discussions and presentations. Speaking off the cuff, she gave a candid recount of what it was like for her family to arrive in America. She fondly remembered her brave mother who sewed money in the children’s coats when they traveled, and she detailed the shocking accommodations for her animals she was presented with upon arriving in America. A lifelong performer who can expertly read a crowd, she inserted jokes and lighthearted stories at just the right intervals to keep the audience engaged.

Ms. William’s presentation was bookended with an observation and a plea that would be repeated throughout the convention. Calling attention to the average age of the population in the room, she quipped at the start, “The only justice in life is that we get old.” She closed her talk by impressing upon the crowd that their personal collections of circus memorabilia ought to go to a worthy home. This was the first of many self-referential, albeit jovial, digs that were made at the seniority of the Circus Fans membership. Under the good natured humor, the comments were tinged with a somber tone and earnest concern for the future of the organization. Joe Barney, owner and producer of Center Ring Productions and the convention’s master of ceremonies, was never shy to tell it how it is, “The circus is not dead. But look around the room: if we don’t get new people to join us, we’re going to be performing for the Geritol circus!”

Do the Circus Fans think circus is dead? Not necessarily, but their internal struggle between the desire to hang on to and uphold the iconic traditional American circus they love pitted against the realities that circus has changed–is changing– was palpable. The topic was hot amongst the panelists of the Owners and Directors Forum. Wayne McCary, CEO of Eastern States Exposition, tore the bandaid off, “You’re going to see change, but don’t think mistakenly that circus is going to fade away… As much as our generation and people in this room lament the fact that circus is changing, the circus isn’t dying.” Bello Nock reminded the crowd, “Circus is traditionandchange. Circus brought icons, rarities; it changed the environment… You have to change to stay relevant… If you take away the color that we all get fascinated with and look just at the business, it’s like any other industry: supply and demand.”

The presence of animals is a huge ingredient for circus traditionalists. The panelists gently invited the idea of a broader definition. As an agent for international circus performers, Jeanette Williams brought to light a related shift in the industry, “Because of not having animals, the productions have to hire more performers to fill the time.” She adamantly denounced the expectation that performers have multiple skills sets. “I’m very opposed to people asking, ‘How many acts can they do?’ I’d rather they ask, ‘What’s their main act?'” For her, training multiple acts waters down a performer’s ability to present a “first class” act.

The afternoon brought the Circus Memorabilia Collections Seminar offering advice for best preservation practices. Circus Fans have treasure troves of memorabilia, and the reality is that museums cannot always take these collections. To preserve the artifacts, individual owners are tasked with preserving the tangible artifacts of the art form. From Timothy Tegge, the audience learned about the hazards of scotch tape and the unbelievable transformations that proper restoration can bring to old circus posters. Dave Johnson appointed anyone that collected a Historical Preservation Officer and insisted they practice, “Documentation, documentation, documentation.” He also prodded thoughtfulness. “Planning is everything. Give it to the kids? Is it in the will?” Kathleen Mahen spoke to her position as Executive Director of the Barnum museum in Bridgeport, Connecticut and the role that museums play in archiving circus. She assigned the audience a self-reflection task by asking, “What does your collection do? Community engagement? Make people curious?” All advice and prompts were given in good spirit to assist collectors in safeguarding their relics.

I’ll admit I missed the Circus Costume & Choreography Seminar, but for good reason. I fell into a wonderful discussion with Dick Flint. He happened to overhear me say one word in an adjacent conversation, “research,” and politely saddled up for a chat. Flint just happened to be a former president of the Circus Historical Society (a generous portion of their members overlap with CFA) and a veritable well of circus knowledge. He immediately offered a plethora of resources related to my research on spectatorship. Not long after, Flint made sure I spoke with Fred Pfening III, another monumental circus historian. Flint and Pfening  were generous with their conversation and suggestions for resources and other historians and academics that might be helpful to me. They were buzzing with appreciation that I was a young academic interested in circus history — a new person with whom to share their wealth of knowledge and enthusiasm. And I thought, ‘I’m not alone! There are so many performers, students, academics, coaches, producers and contemporary circus fans that would benefit from conversation with the members of this organization.’ And I thought, ‘There is bridge building that must be done. Priceless information is falling into a generation gap.’ Organizations like the Circus Fans Association of America hold a torch for traditional American circus, but as Wayne McCary astutely pointed out, “The new generation is growing up without the same history.” Bello Nock insisted, “The future of circus is partnering.” I couldn’t agree more. Circus in America has and will continue to change, and it’s going to take a diverse, multi-generational group of historians, fans, academics and contemporary practitioners, creators and producers to keep the traditional circus flame alive.

Bello Nock insisted, “The future of circus is partnering.” I couldn’t agree more.

The day wrapped up with the Circus Legends Program honoring important members of the community. Each recipient was introduced with incomparable stories of personal achievements that have shaped the circus industry. As they received the honor, they responded with heartwarming tales of successes, mishaps and always with deep recognition and gratitude for those who aided their work: family, trainers and of course, fans. Circus folks never forget whose shoulders they stood on to become who they are, do what they do and bring circus joy to the world. And nowhere else will you hear things like, “I had to bring the bears up the fire escape.”

Friday was spent at The Big E! Fair where CFA fans were warmly welcomed under the big top for a delightful circus performance. That evening, back at the hotel, CFA members performed clowning, magic and ventriloquism for each other and a new film about P.T. Barnum was screened. The convention quietly wrapped up as week tipped into weekend.

Traditional traveling circuses swept through towns for a single day, Circus Day. Spectators had 364 days to bask in the memories and build up excitement for next year’s show. Similarly, CFA conventions are annual. The group won’t gather again until fall 2020 — this time in LasVegas, Nevada! And I have no doubt that, also like Circus Day, the memories, the camaraderie and the pure love for the art of circus will stay steadfast through the year. Professor, Performer -United States
Madeline is a NYC based performer, producer, professor, and choreographer specializing in aerial, acrobatics, dance and movement direction. She is an adjunct professor of Aerial Arts at Pace University, on staff at Aerial Arts NYC and The Muse Brooklyn and initiated the Aerial program at Muhlenberg College where she taught from 2011 - 2017. Her movement direction contributed to Circle Theater NYC’s production of The Mountain winning Outstanding Original Choreography/Movement, 2015. She co-choreographed The Battles, a musical voted by Broadway producer Ken Davenport one of the top 10 new scripts of 2016. Madeline's choreography has been presented at Dixon Place, Circus Warehouse, BAX, The House of Yes, Abron Arts Center, Times Square, The Flea, STREB, Galapagos, and The Muse. She received BAs in Dance and Theater from Muhlenberg College and is currently studying at NYU’s Gallatin school of Individualized Study where she is designing a master’s degree in circus studies with a focus on dramaturgy and creative processes. madelinehoak.com.
You are about to enter a members-only zone.
To share this article on your CircusTalk member page and connect with circus professionals from all over the world, sign up now. It's free!
Sign Up
Already have an account?
Log in