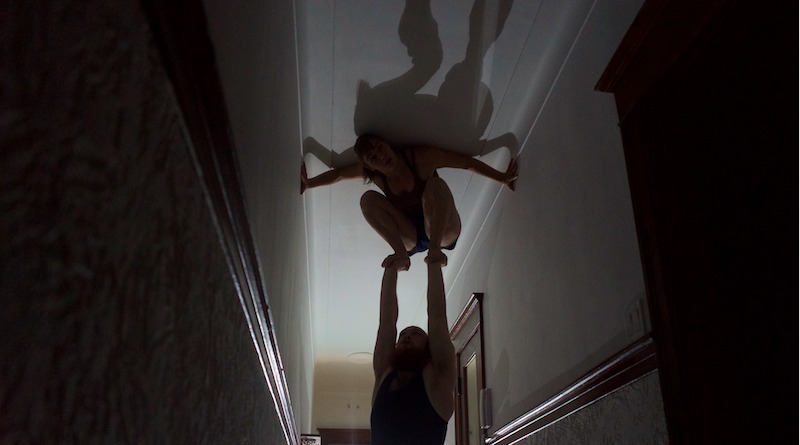 My first introduction to the show Se Prendre came as a pleasant surprise. Se Prendre means ‘To Take’ in French, which feels like a significant hint about the show. Right after a double helping of shows at Montréal Complètement Cirque two years ago, while chatting in the lobby, Vincent Messager approached me and my colleagues and said, “Hey, do you want to go to a secret apartment show?”

Even after a day of circus conversations at the conference and days of back to back shows, we were intrigued. Who doesn’t want to know about something secret? Created by Claudel Doucet (director and performer) and  Cooper Lee Smith (performer), Félix-Antoine Boutin and space designer Étienne René-Contant, Se Prendre is now no longer a secret but a touring show (with upcoming performances in Prague). Why the big secret then? Because it was groundbreaking in a spatial way, as it all took place in a private dwelling.

It turns out apartment shows have their spatial limit, and this one was eight or nine people, so  our colleague probably shouldn’t have invited us to it. Nonetheless, his invite was honored and three extra bodies wedged in to Claudel Doucet’s apartment in Montréal, which was sparsely furnished, thank God. Whether that sparseness was intentional and things were taken to storage in order to produce the show, or whether Doucet was a minimalist by dint of being a frequently  traveling circus artist, I don’t know. But we sat with a small group of programmers who are quite used to filling 1000 plus seat halls for circus shows and watched Se Prendre unfold in the artist’s living room, and eventually an empty bedroom full of dry ice and strobe light—but only after we’d crawled through a secret door in the closet. Which was a nice touch.

What unfolded was strange and intimate, a very close-up glimpse of a couple’s relationship as it evolves from curiosity, to affection to monotony, but settles on comfort, love and renewed passion. At least that’s what I grasped about it when I saw it for the second time, two years later in Madrid. Through a lucky twist of fate, one of the programmers, Maria Folguera, who had seen Se Prendre decided to book the show during the week of their Festival IberoAmericano de Circo (FIRCO) in Madrid at her venue Teatro Circo Price.

The Allure and Perks of a Small Scale Show

To programmers who have quotas to fill, the thought might occur–‘What are the pros and cons to programming small scale works like this?’ Folguera told us about the plan at MICC in Montreal back in July, and her reasoning for bringing the show across the pond to Madrid made sense. “A show like that is an intriguing bonus to a festival. Of course, it can’t bring big ticket sales, but it brings extra cachet to a festival and some intrigue. It shows a programmer’s commitment to the art form and it is a special bonus for visiting guests to be included in it somehow.” So it seems that Se Prendre didn’t just find a niche, but created one that might be sustainable for this rather light show of two artists who just need a minimalist apartment to remount their site specific work in.

That niche is quite specific though– a show that plays as a bonus experience for a select few at a circus or arts festival—the exact few who will hire you to play at the next festival. Sustainable yes, but Doucet’s vision and hopes for Se Prendre goes well beyond filling that niche, as Rebecca Galloway stated in her article on CircusTalk about site specific work “Accessibility and the idea of arts-for-all is also a leading concern for Doucet, who would like to take the work to communities that might not otherwise have opportunities to see circus.“(We’d like to) go to small town communities, villages… whole countries have no festivals or institutions that mandate circus projects so I’m hoping we can cross those limitations.”

There are many pros and cons to doing an apartment show, but the grassroots DIY sense of being closer to the creation and being on the inside of the experience itself weighs heavily on the pro side. Vincent Messager, the booking agent who introduced us to the show originally, agrees, “Who would have thought you could make an acrobatic show with strong dramaturgy in a five room apartment with a ten foot ceiling!” he proclaims.

Apartment shows aren’t new, in fact. There are a few related precedents. Take the European roving apartment theater festival Hors Lit and the musical trend of Porchfests, the porch centered outdoor festivals in Philadelphia and Chicago that provide a homey feel, something like a cross between attending a BBQ garden party and a yard sale. But these types of performances are somewhat new to circus. Although I’ve heard of a clown festival in an apartment in Melbourne, and a juggling festival in a loft in Philadelphia, otherwise, the mentions of circus feats in the comforts of a homesetting are few, possibly due to space and insurance concerns. For Se Prendre, I can see why. Acrobatics and dance in close quarters presents some challenges, including taking in to account the safety of an audience in close quarters, and modifying movements to stay within one’s personal space. The environment, though disarmingly non-illusory, is limited–its not like you can mentally place them at a train station when they are on the kitchen counter. So the subject matter becomes relegated to the domestic realm. But none of this is a bad thing in the case of Se Prendre because it just adds to the authentic tone. When the couple is doing a writhing acrobatic move to represent their struggle with intimacy, it’s not really 100% metaphor anymore but somehow closer an actual reenactment.

So I found myself in Madrid once again in a small apartment with a handful of people watching a relationship unfold with the magic of circus as the means of expression. As they poke and prod each other curiously, they ask simple questions. “What’s your favorite color?” But most of their relationship develops through physicality almost wordlessly, with Cooper’s deadpan expression, almost Buster Keaton-like, allowing you to project your own feelings and emotions on to him. Doucet’s expression, restrained, almost protective. As their interest in one another grows, they sweat, and breathe, and you are close enough to hear the clicking joints, as their body heat warms the room. Once or twice, I see my fellow audience members, happy captives like me, trying not to flinch as arms and legs wheel past them.

We are not there but we are inches away. I am reminded of a lyric in the song Dearly Departed by Shakey Graves (‘You and I both know that the ghost is me’). By taking up the limited space, we have become part of the saga, but to them we are only spectres–globs of energy to be rearranged with a sweep of the arm. The dissonance feels at times reassuring, as we are so in the mix that is relieving to not have to do anything beyond witness. But at other times it feels decadent, as if we are voyeurs invading their privacy while they writhe on a bed together or feed each other ice cream. But there is something divine about this omniscience. By witnessing their connection, aren’t we connected?

The questions they ask each other join us to them, forming the little ghosts of our earlier relationships with relatable triumphs and struggles. Their eye contact reminds us of something. The flutters, the awkwardness, the frustration, the attraction, it’s almost too palpable. The tragedy is on a human scale—that they are constantly together yet alone, just like us.

At the beginning of the show there is a sign on the floor that says ‘Follow the Light’, and it turns out this is just their flashlight-wielding and spooky way to get you to go in to the next room with them so they don’t have to break the wall between audience and their characters. When we follow that light, the artists’ struggles and pain becomes real and in some ways our own pain as we crouch and twist in the narrow hallway to witness their struggles. But there is triumph in the mix as Doucet and Smith climb the walls, and as they fly to the windows and fling them open, or jump from on high in to each other’s arms while still wet from a bath.

The question that I ask myself is, could these warring feelings of being part of something so visceral and yet of being so isolated, could they happen at a giant arena show or a 200 seat theatre? Probably not. Those shows are about suspending your disbelief, joining in a fantasy, or mentally projecting their experiences on to yourself, whereas Se Prendre is asking you to take part in the heightened reality of a lived experience just by dint of your extreme proximity. That is a different kind of theatre and circus event, perhaps only comparable to the group intimacy that arises from street shows, but still more specific and personal. It is because of this that I hope Doucet’s vision of taking the show to towns and villages that don’t have festivals and circus projects becomes a reality—so that more people can experience that rare sense of presence.