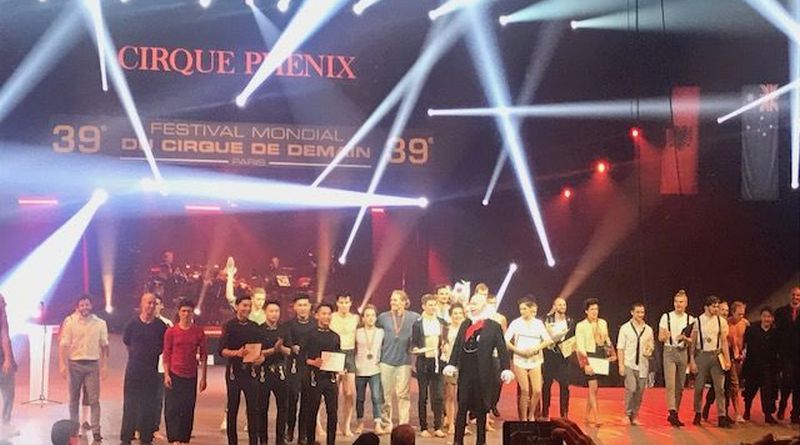 Festival Mondial du Cirque de Demain in Paris is one of the world’s most famous circus festivals, about to celebrate 40 years of exposing audiences to the future of circus, to contemporary artists breaking ground on unusual work.

Happening almost back-to-back with the Monte Carlo International Circus Festival, I always thought of the two as somewhat complementary: one, a celebration of traditional circus and its role in European entertainment history, an event dedicated to respecting and preserving the past; the other, a competition looking ahead to the future, to “tomorrow”, collecting the most innovative artists from around the world and giving them a stage to show us the direction in which circus is heading.

I had dreamed of going to Cirque de Demain for years, and in 2018 the stars had finally aligned. So off to Paris I went with tickets to both programs, so that I may witness every single competing act in this year’s edition.

Certain aspects of the festival lived up to the hype: the stage was large and well-equipped, the lighting enhanced the performances, the technical team ran a tight ship, and above all I was impressed with the technical level of the acts, each displaying difficult moves and feats of human strength and flexibility. I felt every single artist on that stage has worked hard to become the skilled performer they are, and to make it to the festival’s selection.

While I found some acts to be more innovative than others, innovation was not the main source of my disappointment. Each artist did their best, and I am grateful to have witnessed such skill. My disappointment lies with the selection itself.

Cirque de Demain translates as Circus of Tomorrow. Tomorrow, to me, means more than new apparatus or unusual use of known apparatus. I’d like to think that when we look ahead to the future of circus, we see a world with more equality and diversity; a world where women are seen as more than the love interest of their male partner.

And this is where the festival failed.

Programs A and B had a total of 23 acts made up of 38 performers. Out of these 38 performers, only 7 were women. It is important to note here that racial diversity was also lacking:  Out of 38 performers only 8 were not white (and they were all Asian). But, for the sake of focusing the article, I chose to concentrate on the gender inequality – women made up less than a fifth of the artists competing at the festival. Furthermore, all 7 women were in acts with men. This means that out of 23 acts, not a single one was a women’s act.

The issue here is double: For one, you read correctly, this is 2018 and not a single act was a women’s act. Second, for the most part, the mixed-gender acts stuck to traditional gender norms, with stereotypical representations and narratives: women flew, not based (a noteworthy exception was Viivi R. & Fragan G. Duo, where the woman based the man on rope); most of the women’s costumes were dainty, revealing and full of Swarovskis; their figures petite.

On the festival’s website it says: “[the founders of the festival] imagined an exceptional event where, for the first time, young circus artists will have the opportunity to present their art to an international jury and curious and enthusiastic audience.”

Could it be possible that none of these prospective, young circus artists happened to be women? The festival states that they had received 1,000 submissions. Could it be that among 1,000 acts they couldn’t find a single female applicant deserving of their stage? I find that hard to believe.

Also, this “curious and enthusiastic audience” they speak of: I wonder if they noticed that most of this audience was teenagers and young adults, students who came from circus schools all over Europe. In the audience beside me sat the future of circus, the future they claim to serve, they all came to see this so-called future. What kind of a message do we send them when the stage is devoid of female soloists and women-run companies? How could the festival tell them that their “tomorrow” has no room for women’s voices?

Unfortunately, the festival had failed the circus Bechdel Test in more than one way. Beyond the lack of women’s acts, there was also a painful absence of representation that breaks the stereotypes of women in circus. I wonder if the selection committee had not received submissions from companies who are breaking the mold of gender norms, or if they purposefully chose to stay away from women who breaking the glass ceiling of canvas tents.

I imagine submissions from women who are bases or curvy or butch, women who prefer jeans to sequins, women who create breathtaking work that does not include men. Were these types of submissions truly absent from those 1,000 submissions the committee claims to have received?

I wondered if maybe this problem is not unique to the festival alone. Perhaps circus schools in Europe and Canada, from which most of today’s circus artists emerge, produce more male than female graduates? Data on this question was difficult to find, but I managed to source some numbers with the generous help of Jakob Jacobsson and Marie-Andree Robitaille of the Gynoïdes Project. Looking at data from leading schools such as ENC, DOCH, CNAC, NICA and ESAC, the gender gap is not so stark: On average the ratio is 54% male graduates to 46% female graduates. The ratio differs from school-to-school and year-to-year, but generally speaking the numbers usually balance out. With a fairly equal number of competent, creative men and women graduating circus schools annually, I find it difficult to believe that 1,000 festival submission were dominantly from men.

I can already envision that, somewhere out there, someone is reading this article and thinks: “Well, maybe there were some great submissions from women, but the men acts were simply… better!”

To that someone, I answer: We no longer live in a world where it’s ok to have little or no representation of women in the name of “the best ones get the job”. It’s an old, outdated excuse, and I see that excuse dissolving every day in the actions of the artists training and creating work around the world. Affirmative action aside, it is highly unlikely that there wasn’t a single worthy submission from women.

Watching the live feed of the Saturday show, circus women all over my facebook feed were rolling their eyes in exasperation, tired of this nonsense. Their sentiments echoed in one another’s: we have nothing against the performers (who were very talented and skillful), but come on now, Cirque de Demain. You can do better. You should do better.

I am glad I went to the festival, as I saw some great acts and got to commune with my worldwide circus family. But with the festival’s 40th anniversary coming up next year, I strongly urge the people behind this festival to get together and reconfigure the kind of festival they want to produce and the kind of legacy they wish to create.

I hope they will think of their past, when this festival was started to create an alternative to the traditional Monte-Carlo festival. I hope they consider their present, one with a stage devoid of female  acts. Then I suggest they think of their future, think of “demain”, this word they chose to represent their event. What kind of legacy will this festival leave? Will it become one that is remembered as having helped usher tomorrow in, or as having lagged behind?

There are  countless women around the world who create clever, imaginative, inspired work. We embody the future of circus, with or without the festival showcasing it. If Cirque de Demain is just a market for casting directors and circus agents to watch and book young talent, then it did a great job. But if they wished to do good by their name and legacy, they fell short.

I thank Cirque de Demain for almost 40 years of a wonderful festival that draws attention from all over the world. If the festival wishes to continue to be synonymous with ingenuity, I sincerely hope that next year’s will give stage to a more diverse range of voices.

The world is changing. So is circus. Please catch up.

The author wishes to take back her comment on Swarovskis. Due to a combination of near-sightedness, faraway seats and stage lights, she has mistaken a few costumes to be more glittery than they were in reality.

The author also wishes to add that this article does not claim for there to be no room for lean acrobats, female flyers or revealing costumes, nor that there is anything wrong with women who choose to make that kind of circus. It is also important to point out that not every single act suffered from the problems mentioned in this article, nor that there was an act that combined them all.

However, enough of this was going on that it did add up to an overall program that felt, to the author, a bit too homogeneous and familiar. Therefore, the main point of this article remains relevant: In a festival that claims to represent tomorrow, there should also be room not only for a larger number of women, but also for a more diverse range of female representations.