The Circus Ring of Fame Revamps Itself, & Meet the 2020 Inductees 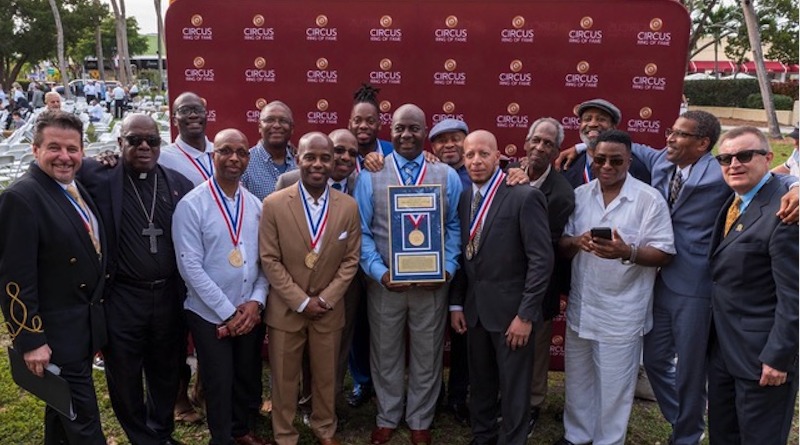 The Circus Ring of Fame Foundation began in 1988 and has since inducted 140 circus artists from around the world. The Ring of Fame graces a central park located at St. Armands Circle in Sarasota, Florida. Each year honorees are nominated by the public and voted on by former inductees, historians, scholars and knowledgeable members of the global circus community. There is a ceremony where inductees are honored with a bronze wagon wheel which visitors and locals alike stroll past to read decades of circus history.

We spoke with Bill Powell, the Chair and CEO of The Circus Ring of Fame Foundation about the foundation’s mission and their growth in the past two years. After serving as a member for five years, Bill Powell was elected Chairman of the Circus Ring of Fame Foundation Board of Trustees. During his tenure, the “Ring” expanded the board of trustees, passed new bylaws, organized a committee structure, created the first-ever Circus Advisory Council, added production value to the annual induction ceremony, and created a new website and merchandise program. Early in his career, Bill was responsible for Feld Entertainment’s international expansion into the Latin American entertainment market. He pioneered the introduction of Disney on IceSM , Feld Motorsports and Ringling Bros. and Barnum &Bailey into Mexico, Spain and eight countries in South America, bringing live family entertainment to 700 million new potential customers.

Kim Campbell: Why is it important to recognize circus performers and their achievements? Is the recognition industry-facing or meant to help to inform the public about circus history and its continued presence?

Bill Powell: The Circus Ring of Fame Foundation’s core purpose is to “Recognize the highest of achievement in circus arts and culture.” We do this for many reasons but the most important is to provide indelible acknowledgment of a career span of excellence devoted to the circus arts. We believe the location of the Circus Ring of Fame may be the best place anywhere to honor someone. It is surrounded by high-end retail, art galleries and great restaurants. St. Armands Circle, originally founded by John Ringling, is an upscale tourist destination hosting over 3.2 million Sarasota visitors annually. We work in association with many local government organizations on an annual basis to coordinate our activities. It is only befitting that circus artists have an excellent place to be honored for their accomplishments.

Historically and currently the recognition is largely industry facing. This is evolving as the Circus Ring of Fame Foundation moves into phase two of our long-range strategic plan. The induction ceremony is one calendar day of the year. The plaques, however, are permanent. Recognizing this, we are in the process of bringing the stories of those honored to life on our newly created website and social channels. We want to be the storytellers of the inductees through biographies, graphics, pictures and videos available on our site accessible via desktop or mobile device. Initially, our goal will be to connect St. Armands Circle’s visitors to the inductees via the mobile application. Once we reach a point of critical mass on biographies, we will begin a global outreach program via marketing, PR, social media and strategic partnerships to amplify the inductee biographies and the story of the Circus Ring of Fame Foundation. At some point in the future, we will live stream the induction ceremony and potentially develop a TV property if interest warrants.

KC: The Ring of Fame has had an image update recently. Can you explain the changes you’ve made and why they were needed? How did these changes affect your mission or by-laws?

BP: The rebranding arose out to work being done on the new website and stage graphics. This part was handled by board member John Zamoiski and an ad agency out of New York City. We also contracted with OAI visual branding in Tampa for stage graphics/set design. The rationale for the changes was a statement of the progress we were making with the entire organization. We had accomplished a lot and desired a new look and feel to reflect the future of the organization.

The image update is an outgrowth of work we have done over the past 18 months. Beginning in January of 2019, the Circus Ring of Fame Foundation leadership changed and shortly after new bylaws were adopted. New board and committee members were recruited over the next couple of months. Beginning in May of 2019, the newly formed nominations committee reviewed potential candidates and selected 16 finalist nominees to be voted upon by the previous inductee members. Formal voting started in July. Along a parallel path, we created a Circus Advisory Council by reaching out to circus affiliated organizations worldwide. The foundation asked for their online “survey vote” to gather global opinion of the candidates. The final inductees for the class 2020 were announced in late September of 2019 and formally inducted January 12, 2020.

KC: Tell us a bit about the nomination process: What are the requirements to nominate someone and who decides on the recipients of the award?

BP: The initial nomination process is fairly straightforward: anyone can nominate a candidate for consideration by filling out a form available via the website which they can return it by email, file sharing service or USPS. After a candidate is proposed by a sponsor, the information is assembled into packets and provided to the nominations committee for initial vetting. They use a set of guidelines to help them determine if the candidate meets the criteria. In the process, they do an initial “straw” vote and are asked to wait a week to confirm or change their votes after further due diligence and reflection. The final slate of nominees is then presented to the legacy inductee/voters and the Circus Advisory Council for their survey vote. The bylaws provide for oversight of the process by the executive committee. The final inductees are announced in September of each year.

KC: Who are your partners and colleagues in this process and how have they helped you raise awareness about the project?

BP: The Circus Ring of Fame Foundation initiated a global partnership program in 2019. To date, we have aligned with some of the most prominent names in live events and entertainment. All of the major venue management firms are represented: ASM, Spectra, Venue Works, Oak View Group, PFM and many others in the industry are partners. In the live entertainment space, we have Feld Entertainment, Cirque Du Soleil, The Gold Group, TGC Entertainment/Cirque Música and Universoul Circus. On a local level, we are supported by the Community Foundation of Sarasota County, The Patterson Foundation and we have an alliance with The Circus Arts Conservatory. We also have several prominent individuals and families who have stepped forward to support our mission. While the support to date has been largely financial this program will eventually develop and encompass outreach and amplification of key messages.

KC: How has the Circus Ring of Fame Foundation endeavored to develop a wider audience beyond the USA and beyond heritage or traditional circus?

BP: With the Circus Ring of Fame Foundation class of 2020, we embarked on a first recognition of Guy Laliberté, the father of contemporary circus and founder of Cirque Du Soleil. His candidacy was supported by the board, nominating committee and voters. There was initial resistance from some voices in the Sarasota based traditional circus community. However, after debate and reflection, they eventually welcomed the inclusion of contemporary circus. It was an educational process and the board worked hard with community leaders to educate and inform everyone. The end result is the great majority of them welcomed the long-overdue inclusion of contemporary circus into the Circus Ring of Fame. With this behind us, we look forward to the future and welcoming excellence in circus arts expressed in all forms.

The Circus Ring of Fame Foundation is platform agnostic and we exist to recognize excellence in circus arts and culture.

Additionally, the newly created Circus Advisory Council will play an important role in moving towards the future as it becomes more established. We have the means of communicating to a global audience of industry professionals and are actively seeking their feedback by offering them a voice in the form of a survey/vote and an open invitation to propose future candidates. The Circus Ring of Fame Foundation is platform agnostic and we exist to recognize excellence in circus arts and culture. We view the circus as a flexible art form expressed through different live performance options. As more traditional forms of circus evolve to new and/or retro interpretations we will acknowledge all who exemplify the highest of achievement for the arc of their career. Wherever great circus leads us, we will be there to support and acknowledge excellence along the way.