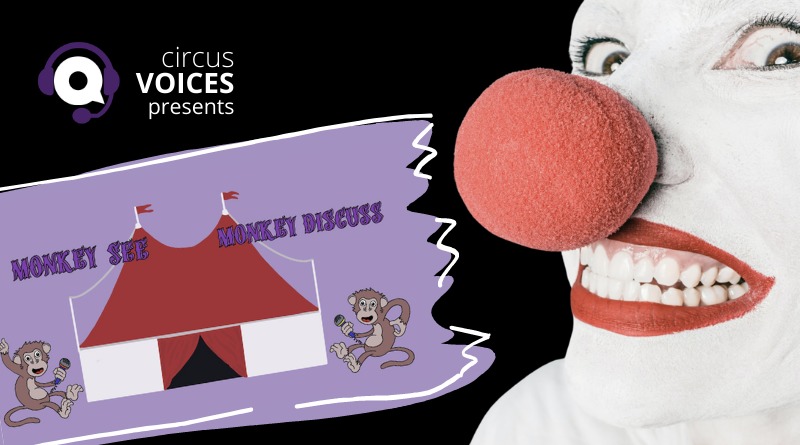 Circus Voices, a podcast brought to you by CircusTalk is pleased to present a podcast series titled Monkey See, Monkey Discuss created by Ruby Burgess and Rosie Kelly.

Rosie Kelly has been part of the organising team for both the British and the European Juggling Convention as well as organising her own convention (CATCH!) in 2018. She juggles and compères at shows and conventions and currently works as a Giggle Doctor for the Theodora Children’s Charity. Ruby Burgess recently graduated from Circomedia in Bristol with a BA in Contemporary Circus and Physical Theatre. She specialises in static and swinging trapeze and has performed with companies such as Above and Beyond and Cirque Bijou as well as teaching with various companies including Gorilla Circus. Rosie and Ruby met when writing reviews for The Circus Diaries and have been chatting circus ever since.

Ep#4 In the last episode of this series, we’re focusing on the funny. We delve into the shifts in the public’s perception of clowns, from being dismissed as childish, to sending chills down spines. We uncover some misconceptions and learn about an eggciting way that clown history is being preserved. What role does clowning play in culture past and present, and how important is mockery?

Rosie Kelly is from Appleby in Cumbria, where she joined the youth circus at 13. She has been juggling, manipulating and compèring at shows and conventions ever since. You may recognise her from shows such as the Electric Boom Cabaret at the Edinburgh Fringe and the British Juggling Convention gala show in 2017. She has been part of the organising team for both the British and the European Juggling Convention as well as organising her own convention (CATCH!) which took place in her home town in 2018. She has been writing reviews for The Circus Diaries for 3 years and also works as a Giggle Doctor for the Theodora Children’s Charity.

Circus and Changing Realities 2020: A Historical Look at the American and European Traditional Circus–A Comparison

September 28, 2020 Maddly GuillaumeComments Off on Culture and Health with Circus Arts, Circus and Medicine Research