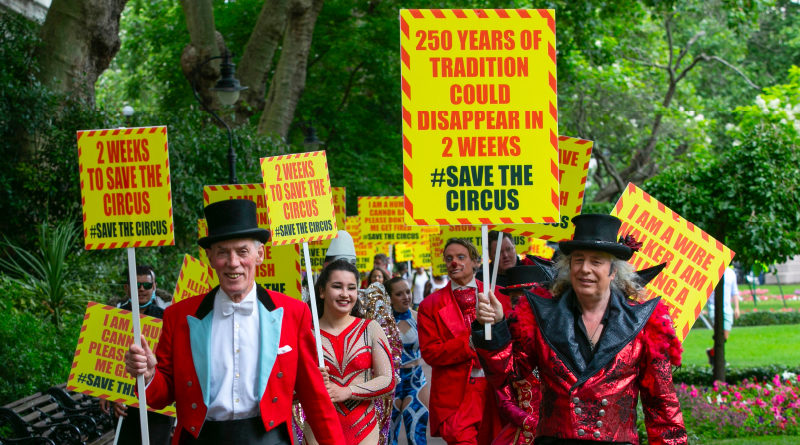 Today, circus performers from around the UK have marched to Downing Street to deliver a letter from The Association of Circus Proprietors (ACP) – the government-recognised body for professional circus producers and performers- to the Prime Minister calling for either inclusion in the government’s arts rescue plan or the right to reopen, and warning that the sector could collapse in as little as two weeks without support.

The announcement of the bailout on Sunday (5 July) was greeted with relief by many in the arts and entertainment sectors, but contained no provisions for an artform which was invented in the UK, and has been a significant part of the country’s cultural landscape for over 250 years. Over 30 circuses were active in the UK at the beginning of lockdown, attracting annual audiences of over 20 million.

They marched from Whitehall to Downing Street and began the rally by delivering a letter to the Prime Minister calling for inclusion in the government’s support for the arts.

The letter, from ACP chairman Martin Burton and supported by 18 member circuses from around the country representing over 500 circus professionals, said:
“Sadly, circuses seem to have fallen through the cracks of all the rescue package schemes – we pay rent to individual landowners as we tour – and do not have business rateable properties. In addition no commercial circuses have qualified for the any of the £160m emergency Arts Council funding despite generating significant income to the economy through the 30+ UK circuses and internationally visiting shows such as Cirque du Soleil which combined are seen by around 20 million people a year.

“Its greatest slogan ‘The Show Must Go On’ could well become a thing of the past if urgent assistance is not forthcoming.
“Please save the Circus – we have two weeks before the end of the road.”