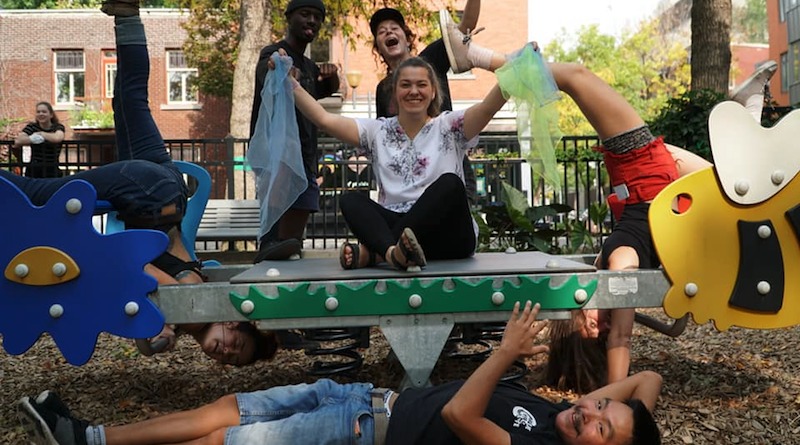 Cirkaskina’s first 2020 young ambassadors’ committee was organized the weekend of September 25th, in collaboration with the St. John’s International CircusFest by Cirque Hors Piste. This unique virtual committee brought together 44 participants (companions and youth) from 12 communities across Canada to jump-start a collective social circus creation process on culture and diversity. From Vancouver to Halifax, including Toronto, Quebec city, Sherbrooke, Nunaviq and of course Montréal, all communities made the best of this exchange platform allowing the youth to share knowledge, build links, and take advantage of privileged spaces to express oneself.

The young ambassadors’ committee took the form of interactive workshops, forum discussions and for those fortunate enough to be part of the Eastern provinces bubble in Canada, some precious in-person moments to make new friends from other provinces and connect via social circus. Intotal, 25 youth participatedin the workshops and discussions on culture and creation in their local environments. Ignite Circus based in St. John’s, Newfoundland hosted Halifax Circus and a duo of youth from Labrador known as HayeObed in person during the committee. Others joined in for 5 workshops spread over the course of the weekend.

Gathering remains an important part of Cirkaskina. In fact, support and solidarity emerged as an important theme throughout the online committee as the participants reflected on what they hoped to get out of the weekend’s events. Many spoke of their “social circus family” when referring to local groups. Two youth one from Montréal and one from Toronto spoke similarly about their experience of social circus in their communities, expressing the importance of sharing community meals in addition to practicing social circus. As the youth spoke about the participants who attend their organizations and the values they share, they were able to learn about the diversity of social circus practices in Canada.

One youth from Nunavik shared how they typically try to incorporate their Inuit culture into collective creations by blending legends and mythical figures with circus. Many youth underlined diversity as a common point between them as their organizations tend to welcome people from all walks of life and make them feel at home. Another youth from Quebec city associated the word freedom with his local social circus organization, giving the example of drop-in workshops which make it more accessible for people to come when they want to. Youth from Labrador spoke of their desire to preserve Inuktituk, their native language, and the challenges they face in doing so. By introducing themselves and talking about their local social circus programs, the youth were able to celebrate the diversity of different practices but also notice and appreciate common threads that bring them together.

As the weekend unfolded, the youth got the chance to participate in a very special social circus rally, but also to a creative workshop with Patrick Leonard, one of the artistic directors of Montreal’s renowned circus company The 7 Fingers. This led up to each group creating a short social circus performance which they presented over video during the closing workshop. Throughout these workshops, they began the creative process of exploring the use of circus as a vehicle for local culture. For example, they each took photos of themselves doing circus outside of the location from which they were attending the online committee. When sharing the photos with the group, many enthusiastically described the setting and how they got their ideas for the photos. Socirc, the Toronto group daringly positioned one of their participants in a tree saying “friendship and determination got them up there.” The cohesion between the groups of youth was palpable as they inhabited space together with a creative purpose. Two youth from Quebec city decided to mirror each other doing headstands in their backyards, as they joined over zoom from separate locations. Many were proud to share the landscape of their environment, like one participant from Vancouver who added her headstand position to the forest of all trees in her backyard. It became clear at the end of this activity that each participant had a unique environment that was worth sharing and exploring.

As the end of the weekend drew near, participants reflected on their experience and what it meant to embark on this creative process together. Throughout the weekend, friendships and connections began to form as youth from different backgrounds got to discuss topics in zoom breakout rooms together, or in the case of the eastern provinces, to share informal moments together in St-John’s, Newfoundland. In thinking about what they were leaving the committee with, many youth spoke about a feeling of hopefulness. A participant from St. John’s shared his gratitude with the group: “I would like to thank everyone for this weekend. It meant a lot and brought more hope into my life. Peace and love be with you.” This sentiment was echoed by youth from Toronto who were “happy to see new faces and old ones we missed throughout the year.” Another youth shared that he felt happy to be leaving with new friendships, excitement and energy.

Cirkaskina will continue its journey throughout the year, leading up to an in person gathering in Montréal in 2021 that includes a special collaboration with 7 Fingers for the creation part. We hope to use this event to highlight the diversity of cultures and communities using social circus in Canada and create more exchange platforms for all these youth. Each community will work towards that event using our creative guide The Youth at the Heart of Culture and build their own creation and reflection on culture with members of their community. By giving a voice to all these youth, we want them to contribute fully to their community and enrich it with their creativity and resilience.

Cirque Hors Piste (CHP) is a Montréal based social circus organization using circus arts to offer marginalized young people or at risk of exclusion an alternative path for personal and social development. We give these youth artistic and social support that allows them to move forward and flourish as citizens. Social circus is an approach that has been proven over the years and is part of the global arts movement for social change. Its impact on individuals in precarious situations is unequivocal, in addition to contributing more broadly to the collective well-being of its community.

Cirkaskina was born following the process that led to the first National Social Circus Meeting which brought together social circus groups from across Canada in Montréal in January 2020.  Cirkaskina meaning “all together” in the indigenous Atikamekw language, emcompasses 15 partner organisations and the implication of a total of 45 youth living in precarious situations all over Canada. The need to continue to develop a common reflection on the development of social circus projects and working together to create opportunities that meet the needs of our community has become imminent. It is with attentiveness and sensitivity to each of the partners that Cirque Hors Piste continues to put its efforts forward to allow the creation of this social circus movement. Cirkaskina’s main goal is to facilitate networking activities amongst participants, practitioners, researchers and managers in social circus, but also to advocate and build more recognition to favor the development of social circus projects in communities. Project Leader, Director, Dramatherapist -Canada
Daphné Morin is the project leader for Cirkaskina, Cirque Hors Piste’s national component. Trained as a dramatherapist and social theatre performer/director, she has been involved in different community-based theatre projects. She has worked in various settings using theatre for well-being with children and youth living in precarious situations and/or struggling with trauma. Her training as a clown has led her to social circus where she hopes to utilize her knowledge of art for social change to collaborate with young people using innovative creative processes in their communities.
You are about to enter a members-only zone.
To share this article on your CircusTalk member page and connect with circus professionals from all over the world, sign up now. It's free!
Sign Up
Already have an account?
Log in

Daphné Morin is the project leader for Cirkaskina, Cirque Hors Piste’s national component. Trained as a dramatherapist and social theatre performer/director, she has been involved in different community-based theatre projects. She has worked in various settings using theatre for well-being with children and youth living in precarious situations and/or struggling with trauma. Her training as a clown has led her to social circus where she hopes to utilize her knowledge of art for social change to collaborate with young people using innovative creative processes in their communities.