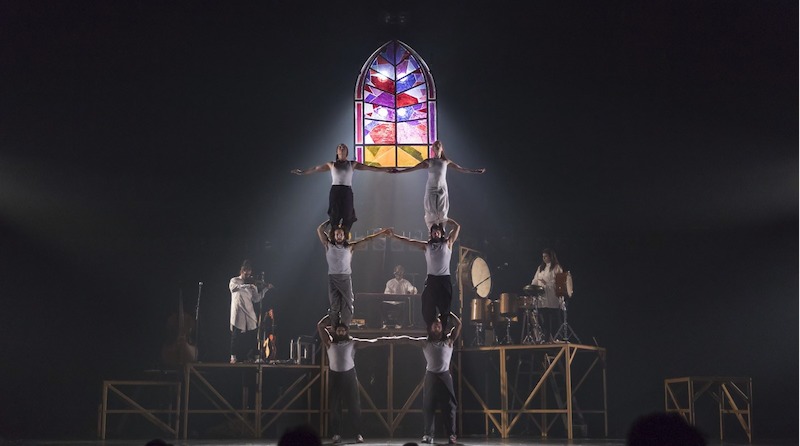 It is strange in these times of canceled shows to read a review, but it just so happens that our new contributor Jamuna Chiarini reviewed one of the last shows to be running to live audiences in the circus world during this time of pandemic. It will most likely be the last review we run for awhile, so I encourage you to relish it, to recognize the joie de vivre Jamuna beheld while being part of a live audience and seeing a show that embraced the spirit of the collective, which is what circus excels at. May it give you pleasure to read, to imagine a time again soon when you and your loved ones will climb onto a stage or be seated in an audience to experience one of life’s pleasures, connecting through art. Long live the performing arts and long live circus!

Picture this: It’s a snowy day, you’re in middle school, and you’re stuck inside a church community center with all your closest friends—and no adults—for 24 hours.  Now imagine what glorious mayhem and mischief might ensue!

That scenario is what I felt was playing out onstage as I watchedTabarnak, the newest work by Canadian-based circus company, Cirque Alfonse, which performed its West Coast premiere at the Newmark Theatre in Portland, Oregon, last weekend, presented by White Bird.

It was like watching a group of adults play out every kid’s wildest dreams, but safely of course. And to top it off, the piece is named for a common Québécois expletive, which only added to the playful hilarity of it all.

Cirque Alfonse is a small circus company that was founded in 2005 by a close-knit family and a few friends, in a barn, just outside the village of Saint-Alphonse-Rodriguez in Quebec, Canada. Their work speaks to their local culture, their life experiences, and combines acrobatics, dance, and music.

The company last performed in Portland in 2016, also thanks to White Bird. Timber, a piece set in a lumber camp, featured bearded, muscled, plaid-shirt wearing, acrobatic lumberjacks, who juggled axes and saws. They also cut up vegetables at high speed.

As we entered the theatre and took our seats forTabarnak, the performance had already begun. With the curtains drawn open, the entire set was exposed to reveal a semi-circle of long wooden benches, some stacked, and a variety of objects that could easily describe Canadian winter culture. Things like snowshoes, skis, and hockey gear. Scattered among these were smaller objects that might have been collecting dust in grandma’s attic for ages: a Christmas wreath, a bean bag toss game, a croquet set, roller skates, a couple of fake squirrels, lamps, bowling pins, an old fashioned coffee grinder, a wooden wash bin, and a large, arched cathedral window frame. Behind all of this, sitting up on a platform, were two mic stands, a guitar, an electric keyboard, and a percussion set.

Without notice, one of the men picked up a hockey stick and began chucking bean bags into the holes of the bean bag toss’s wooden frame until he was successful and then the show took off like a runaway train that didn’t stop again until the very end.

Next came a rearranging of the benches and a seated version of Riverdance. Then the stage cleared and the performers re-entered wearing roller skates. The musicians began to play, and the acrobats broke out into skate dancing as a group and with partners—weaving in and out, spinning, lifting, and hanging off of each other in precarious and thrilling ways.

Somewhere in the middle of it all we stood for the Canadian national anthem, one of the crocheted hats that was made at the beginning of the show was sold to someone in the first row for ten dollars,  and the arched cathedral window, now illuminated by light, rose to its rightful place in the center of the stage, hovering above the action, setting the tone for the spiritual and religious themes that would comically play out throughout the rest of the show.

The amazingJulie C-Lépine, one of the original family members who founded Cirque Alfonse, entered wearing giant hockey goalie shin guards with a mic in one hand.Lépine came down to the edge of the stage and began singinga powerful, soulful song in French that sounded like Irish folk music and a war cry and a calling out to the gods. After she finished singing and the band continued to play, she dropped down onto her knees and continued the feeling of the song with her body, throwing her torso back and forth, whipping her long blonde hair wildly around in the process.

She was incredible! It is such a different experience being in the presence of live singing. Her voice reminded me of a combination of Lilith fair singers from the ‘90’s like Sheryl Crow, Fiona Apple, and Sarah McLachlan. Powerful, real, emotional, spiritual, cathartic, and warrior-like.

For the next 60 minutes or so, which flew by very quickly, the company performed a variety of routines that seamlessly overlapped with one another, each building to ecstatic moments punctuated byLépine’s catharticsinging.

There was physical comedy, acro balancing, and aerial work with straps. There was pole climbing, people stacking, and beautiful, effortless, gravity-defying bouncing and balancing on the rubbery Russian bar. There was baptismal water play, a satirical horoscope sermon, drinking songs, missing pants, and men in tighty whities gleefully swinging incense burners in the air, followed by a little kickball change, a curtsy, and a tiny wry smile. There was just something about the combination of all these ridiculous elements that made me laugh out loud over and over again every time they came around to the curtsy.

If I had to choose, my favorite acts, they would have been the Russian swing, the spinning hats, andLépine’s mesmerizing transcendence to “heaven” on the spinning stained glass window.

It was my personal fantasy as a kid to be able to swing so high on a swing set that I could circle all the way around, leap off the swing, fly through the air, and land heroically on my feet. So to be able to see this fantasy play out live on stage with the Russian swing was a pretty gratifying experience making me want to leap out of my chair to join them.

The crochet hats that we were introduced to in the opening scene of the show suddenly reappeared, dreamlike, out of the dark, as three spinning faceless, a-line shaped entities propelled by music. It was as if some insane person had been crocheting madly backstage and had lost track of time, creating giant, body-sized ‘hats’ that reached the floor and swallowed the person up whole. The image was similar to that of the meditative spinning of the Sufi’s whirling dervishes and was no less beautiful and mystical.

And last but not least was Lépine’s ethereal ascension. Standing strong on the stained glass window, now transformed into a swing suspended by four ropes, Lépine moved effortlessly, twisting and turning, swinging, hanging, dancing, and balancing, creating her own vortex that complemented the constant spinning of the swing, all while singing. As the music built and the swing spun faster, Lépine widened her base, let go of the ropes and continued spinning with her eyes closed, not moving a muscle.  I was transported.

By the end of the night, I felt connected to the performers, like I had spent the evening hanging out with close friends in the basement community room, cheering on their antics.Tabarnak was fun and light, silly and playful, inviting and relaxing. And to top it all off, the performers brought out their kids during bows. They demonstrated some of their own tricks and talents while we cheered them on enthusiastically.

Jamuna Chiarini is a dance artist, producer, curator, and writer, who produces DanceWatch Weekly for Oregon ArtsWatch in Portland, Oregon and has written for Artslandia and The Oregonian. Originally from Berkeley, California, she studied dance at The School of The Hartford Ballet and Florida State University and has trained in Bharatanatyam and Odissi. She has performed professionally throughout the United States as a dancer, singer, and actor for dance companies, operas, and in musical theatre productions. Choreography credits include ballets for operas and Kalamandir Dance Company-a New Jersey-based dance company that merges multiple forms of classical Indian dance with modern dance to create a contemporary voice. As a producer, she is the co-founder of Co/Mission in Portland, Oregon and the founder of The Outlet Dance Project at Grounds For Sculpture in Hamilton, New Jersey, which provides a platform for women-identified choreographers, established in 2005.