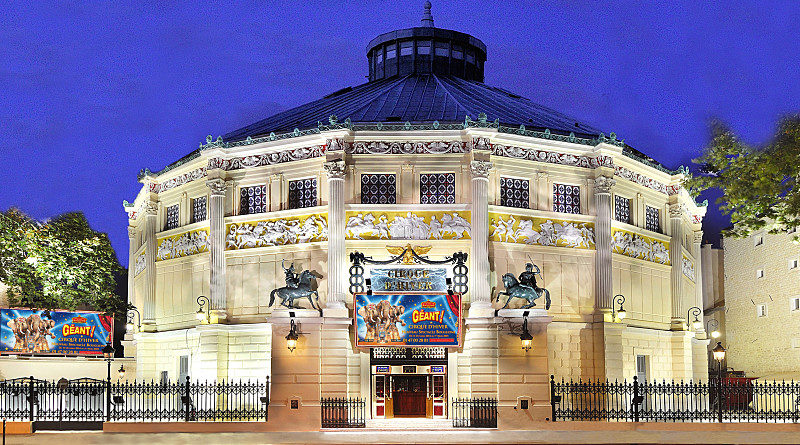 Paris’s Cirque d’Hiver might be the most beautiful building in the world, at least to circus fans. It was constructed in the late nineteenth century, when Louis Dejean, the owner of Paris’s Summer Circus, realized that he could transform circus into a fancier, more expensive entertainment medium if he could provide a clean, indoor venue. Instead of creating his new building near the summer circus he produced annually in the formal gardens near the Champs Élysées, he decided to locate his new venture in the district known as the “Boulevard of Crime,” which was named not for actual crime, but for the dramatic scenes depicted in its numerous theaters. It was the city’s entertainment district, and Dejean had previously run another circus in the area, the Cirque Olympique.

For his new project, Dejean commissioned the chief architect of the city of Paris, Jacques Ignace Hittorf, who designed an elaborate icosahedron (20-sided polygon) that was the first building of its kind without internal columns obstructing the audience’s view, so the interior was as impressive as the exterior, and both were covered in art. Several sculptors decorated the new circus structure with figures of amazons and warriors, and the grounds included stables, sculptures, and a fountain.

In 1852, Emperor Napoleon III opened the new building, which was named Cirque Napoleon in his honor, then over the years, various circuses occupied it. Some let it decay, and others fixed it up, replacing glass chandeliers with electric globes, reducing the number of seats to make them conform to new fire codes, restoring fading and damaged paintings, replacing wooden seat bases with concrete ones, replacing benches with padded seats (although patrons, especially tall ones, still complain about the tightly packed rows), and modernizing the electrical infrastructure.

Over the years, the building was managed by a series of different directors: its founder Louis Dejean, Victor Franconi, Gaston Desprez, and the Fratellinis. Changing with French political tides, the Cirque Napoleon expediently became the Cirque National and finally the Cirque d’Hiver, or winter circus, which is the name by which it is still known today. In 1859, it was the site of a historic circus first, the debut of a new art form: the flying trapeze.

The venue has presented more than just circuses; it has hosted equestrian exhibitions, pantomimes, wrestling matches, fashion shows, photoshoots, concerts, political rallies, and corporate events. For almost two decades at the beginning of the twentieth century, it wasn’t used for circus at all, as it was converted into a cinema, a theater, and then back into a cinema. Fortunately, in 1923, Gaston Desprez bought the building, embarked on a major renovation that included several of the improvements listed above, and converted it back to a circus.

On October 28, 1934, brothers Alexandre, Joseph, Firmin, and Sampion Bouglione bought the building, a surprising move for a family of Sinti Roma who had previously produced exclusively travelling shows. Apparently those travelers were ready to settle down. Except for a brief period when the Nazis seized the building during their occupation of Paris, the Bouglione family has operated the circus continuously since then, and the family name is frequently attached to the building’s: the Cirque d’Hiver Bouglione. The family says the union is “a passion that nothing will stop.”

The family’s passion for circus is absolutely evident in the 2015 show Géant! (Giant!), which the Bougliones present as “an image of their history and their heritage” on the 80th anniversary of their affiliation with the Cirque d’Hiver. This traditional show glistens with snazzy production values, enhanced by state-of-the-art technology, but it is the fantastic cast of international superstars that define the show.

The Casselly family (Germany) has been in circuses for seven generations, but this is its first appearance in France. Perhaps making up for lost time, the family presented three acts. In the first, an elephant took the ring … by itself! In a powerful demonstration of control, René Cassally walked through the audience, guiding the animal by voice only. After showing some of its skills, the elephant picked up its own tub and carried it out of the ring, like an obedient child cleaning up his toys.

Later, the group presented four elephants with four horses and one miniature horse, and for a truly impressive finale, its last act highlighted acrobatics on elephant back. Merrylu Cassally did splits and then a backbend that straddled two bulls. While she was in the backbend, with her feet on one elephant and her hands on another, her brother René Jr. did a handstand on her arched stomach. He also did a back handspring and a backflip from one moving elephant to another. As if that weren’t enough, then they brought out a teeterboard, and one elephant catapulted René Jr. into a triple back somersault to land on another elephant.

At the beginning of their act, Ambra Faggioni (Italy) performed on silks while Yves Nicols (Spain) sang, but soon he joined her for a sensuous aerial tango duet. In their most impressive trick, Faggioni spun by her feet from a chair that Nicols held on a mouthpiece as he hung upside down on the silks. Daniel Golla (Germany) was an unusual addition to the show. He piloted a remote-controlled airplane around the ring, making it display streamers and sparklers and steering it through hoops held by women dressed as flight attendants. Pat Clarrison (United Kingdom) appeared as a hot dog vendor, whose four energetic “hot dogs” (all rescue animals) caused comedic mischief.

American clown Rob Torres appeared as a wide-eyed tourist, eager to take photographs, join the show, exasperate the ringmaster, and capture the audience’s enthusiastic applause in a little box so he could enjoy it any time. Torres appeared throughout the show and had plenty of applause to take home, especially after his charming audience interactions, including a plate-spinning routine with a young volunteer, and his skillful and comic routine with shaker cups.

Leosvel Gutierrez Almeida and Leon Diosmani Aquero (Cuba) demonstrated the Chinese pole number that earned them Monte Carlo’s silver clown in 2013. Besides working individually and in unison, one man based the other on the pole. For example, one man did a one-handed handstand on top of his partner, who was suspended horizontally, gripping the pole like a human flag. Besides showing incredible strength, grace, and beauty, the duo’s act pays tribute to their ancestors by incorporating choreographic elements of the Kongo Bantu dance practiced by their ancestors.

The Flying Mendonças (Brazil) showed their flying trapeze skills. Ukrainian Trio Momento di Passione presented an unusual twist on the classic adagio act: the two women, Maryna Kushnirenko and Diana Smiian, based the man, Sergii Bubovyk. The presumed inheritors of the Cirque d’Hiver, Victoria, Valentino, Dimitri, and Alessandro Bouglione presented several magic illusions. Ringmaster Michael Palmer, also known as Monsieur Loyal, classic white clown Alberto Caroli, eight Salto Dancers, and a 10-piece orchestra under the direction of Maestro Pierre Nouveau round out the cast, enhance the show, and tie the production together elegantly, and at the end of each performance, even smaller Bougliones appear in the final spectacle to wave to the audience, as though promising they will grow up to steward the show into the future.

If they do take over, they will be the fourth generation of Bougliones to run the Cirque d’Hiver and the eighth to be in the circus business. For now, the founders’ grandchildren are still in charge, and apparently their 300,000 annual spectators think they’re doing a great job. The family photo in the Géant! program shows 29 members, many of whom are closely involved with the production. Besides the six children who appear in the show, Louis-Sampion Bouglione handles communications and manages the onsite museum of circus arts, which displays hundreds of historic artifacts from the history of circus; Thierry Bouglione oversees special events and building rentals, which still provide major off-season revenue; Rosalie Bouglione serves as doyenne; Francesco Bouglione is the circus’s administrative director; and Joseph J. Bouglione is artistic director.

Creatively, Joseph is the one balancing the demands of tradition and modernity. Despite the rise of the contemporary circus movement, he is committed to maintaining a traditional show. “You cannot reinvent circus,” he says, “that would be like saying, ‘I’m going to invent a new bread.’ ” In any case, Cirque d’Hiver audiences don’t come to see something new. “The public wants to see circus,” says Joseph, “they want to see animals and flying trapeze.” On the other hand, they don’t cling to the past. The music and dancing in the show keep up with the times, and the building continually upgrades its state-of-the art sound and lighting systems. The show program recognizes the public’s desire for old and new and welcomes it without tension: “from the innovation to the transmission, to the incredible thrill … the moments lived around this ring are what the public likes and looks for.”

Perhaps it’s this mix of traditional presentation with modern production values that makes the show such a success with audiences of all ages. The Bougliones’ love of circus and devotion to family are explicit, or as they put it: “the opportunity is rare today to be able to live with one’s family in a moment of joy and happiness, united in a whirlwind of emotions.” When Joseph Bouglione says the circus is for people of all ages, he is referring both to the audience and to the producers and performers. Although the Bouglione children are the only members of the family that appear in the ring, their parents’ generation is still closely involved in the creative production. If you look carefully, you might even recognize Joseph Bouglione playing trumpet in the band.

Featured Image:  The building of Cirque d’Hiver Bouglione in Paris designed by Jacques Ignace Hittorf in 1852.