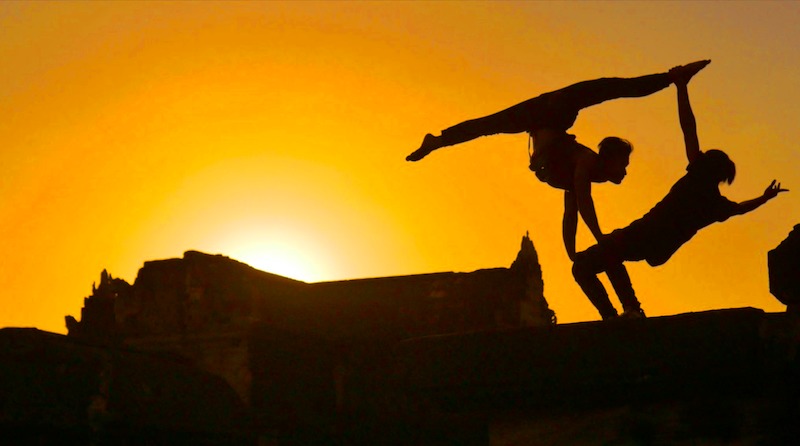 Cirque du Cambodia is a documentary film that follows the circus education and emerging careers of two circus artists (Dina Sok and Sopha Nem) from teen years to adulthood, starting with their circus training in a special arts school in Cambodia called Phare Ponleu Selpak. The school (whose name means ‘brightness of the arts.’) began in 1994 as a way to maintain the Cambodian artistic heritage that was nearly destroyed from the genocide led by Pol Pot from 1975-1979. It has since grown into a large school system, providing general and arts education for the region, including their successful Performing Arts School which includes a circus program.

Documentarian and film director Joel Gershon explains how he came to make this huge passion project, which spans 5 plus years of the artist’s lives, following them as they grow into men and become seasoned artists. Gershon, a New Yorker, was working in Bangkok as a journalist and visited Cambodia in 2011. He described his experience at Phare Ponleu Selpak, “I witnessed a circus show performed by local youths – some of whom were orphans, others were recovering drug addicts but all with little hope of a bright future. The palpable joy on the performers’ faces (and the audiences’) gave me goosebumps and I knew right then and there that I had to capture those faces, the mind-boggling circus tricks and the incredible stories of these young people’s lives. Little did I know that telling the story of this special circus and two of its performers would consume my life for the next nine years.”

Gershon speaks highly of the film’s two stars, Dina Sok and Sopha Nem, “They were so talented that they were accepted to train at the best circus school in the world. That set into motion their quest to attain a seemingly impossible dream: to perform with Cirque du Soleil. With a narrative this compelling, I knew Dina and Sopha’s unique journey – from Cambodia to Cirque – would make a powerful and dramatic film.”

Dina and Sopha grew up in rural poverty and found their passion in circus, training relentlessly at Phare’s social circus program. They became two of the school’s top performers and ultimately both were accepted with a full scholarship to the National Circus School of Montreal. Dina’s specialties are juggling, breakdancing, Chinese hoops and tightrope walking.

Sopha is from a large, loving family of 12 brothers and sisters, seven of whom are also circus performers. His acceptance to the Ecole nationale de cirque (ENC)in Montréal is not just a chance at a better life for him alone; it is hope for a more secure future for his entire family, who like most Cambodians, are struggling financially. Sopha’s circus specialties are hand-to-hand acrobatics and arm-balancing but he is a great all-around entertainer. During the summers of 2014 and 2015, he starred in Dimensions, a circus show at an amusement park in Toronto. Dina, who specializes in juggling, breakdancing, Chinese hoops and tightrope walking went on to perform with Cirque du Soleil’s Volta.

The playful spirit of these two hard-working artists, their curiosity about the world and their unequivocal dedication is what comes through in this film that depicts both artists’ trajectory into professional circus and their lifelong quest to become the first Cambodians to perform with Cirque du Soleil.

Nine years later, and the film has emerged right at a time in circus history when everyone’s circus dreams are being called into question. Unemployment in the sector is exacerbated by the fact that many countries have travel restrictions and the itinerant lives of circus performers have been put on ice for a year or longer. Cirque du Soleil itself has shut down all of its shows, gone bankrupt and is undergoing restructuring, leaving thousands of laid-off employees to wonder what their long-term job prospects are in the circus world, should touring shows come back in the next year or two.

“Youth from the street can recognize themselves in circus.” —Emmanuel Bochud, speaking in Cirque du Cambodia

All of these factors have had a heavy impact on the circus sector’s morale, and so this foray into the past where two kids from the streets of Battambang in Cambodia can work their way up the performance ladder in their social circus program, get a full 5-year scholarship to Ecole National du Cirque (ENC), graduate and get hired to work for Cirque du Soleil (and other big companies) is a reminder of sturdier economic times and a dose of optimism for the future. Whether or not their dreams will continue to come true is a question that applies not just to them, but to everyone in the circus sector these days. Yet, seeing the area they have emerged from, it is clear that the stakes are higher for them than for many. Their families rely on their success to help the younger members, and when circus contracts disappear, there are no safety nets to catch them.

Gershon explains that the school and Sopha and Dina aren’t doing great now financially and he will hold a benefit screening for them all after the premiere, which will be aired through CircusTalk EVENTS. “As you know, this is a very tough time to be a performer and there are limits on what they can do since they don’t have citizenship outside Cambodia, and besides that, there aren’t many opportunities anywhere.” Currently, Sopha is back in Cambodia and Phare has limited social distanced circus shows they are putting on now due to the pandemic and lack of tourism currently.

For those in the circus world, this film will likely have some familiar faces from Montréal, Canada and the United States. Circus Harmony founder Jessica Hentoff pops up to weigh in on the impact social circus has on her students, many of whom, like Melvin Diggs and Sidney Iking Bateman, have gone on to become professionals in and outside of the circus sector. Emmanuel Bochud visits as well, former manager of Cirque du Monde, the arm of Cirque du Soleil which had a huge outreach to the social circus community worldwide. Dima and Sopha’s classmates, family members, teachers, and stewards all make appearances to recognize their achievements.

Although the film tends to focus on the plus side of social services and the benefits of personal action, it does dip into the realities of systemic poverty and disadvantage upon occasion, as when school director of operations Xavier Gobin mentions that many of the students are overcoming and working through the trauma of being trafficked or being addicted to drugs due to extreme poverty. He further cites the program as a means to help the students of the school become self-sufficient and to earn salaries with their art, and this philosophy somewhat conflates the goals of social circus and a professional circus career (be it as a high-level performer or a street performer) which is something not all social circus practitioners agree with, but which becomes more common in cultures where unemployment is a real concern.

As the two circus artists assimilate and adjust to Western culture, eventually accepting the deliciousness of poutine and becoming fluent in French, it becomes apparent how rare their experiences are, and that opportunities for professional circus arts training are not available to performers from all countries and economic classes equally. Although it is by no means a perfect system, their home circus school sacrificed to provide them with financial assistance and to finish the promise that it began with to help them achieve their highest goals in the circus world. And that they did. Watching their journey will hopefully inspire not just many more circus students, but also circus schools and other arts funding sources to prioritize arts education for children as a means to make their daily lives better, and for personal growth, but also to offer a professional avenue for the ones who chose to aim for it.

Joel Gershon is offering a special benefit screening of Cirque du Cambodia on November 2oth, 2020 on CircusTalk to raise funds for the Phare Ponleu Selpak school.