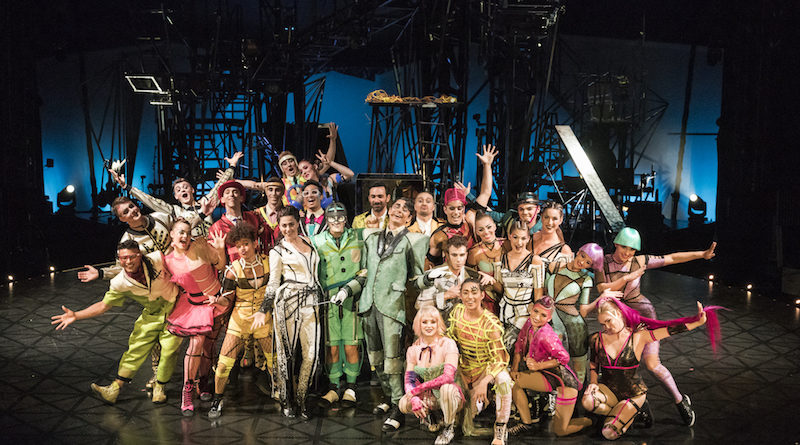 Described by its creators as “an eclectic lab of infinite creativity where a joyful troupe of acrobats, dancers and musicians craft an awe-inspiring spectacle “BAZZAR is being touted as the show that will open the doors to an entirely new segment of the world for Cirque Du Soleil. Following that logic, in addition to introducing their own brand, they are also bringing the western concept of circus to the masses in the East and Africa. Although the media’s signature vague descriptions of a fantastical world of merriment and exploration doesn’t tell us much about the show, there is more to be gleaned elsewhere.

In a press release published in June, Cirque du Soleil stated that the show was made to pay tribute to their roots–by which they imply the legendary street circus beginnings of the company. In other words, Cirque du Soleil intends to break in to the Indian and African circus market by showcasing a smaller, more manageable cast and crew under the big top–but also altering or ‘retro-ing’ their style to fit what they perceive as a different demand from a different market. Director  Susan Gaudreau describes the conundrum. “Creating a show specifically to introduce Cirque du Soleil to a totally new audience is a creative challenge. It pushes our creators to find our essence and articulate it in a way that is universally understandable. With its story centered on the creative process itself and the energy found in the unexpected,BAZZAR shines a light on what is uniquely Cirque du Soleil.”

Bringing  BAZZAR to India and the east is strategic in several ways, especially since it is a business move made in conjunction with BookMyShow and with Citibank as a presenting partner. Ever conscious of the goal to expand their market, Finn Taylor,Senior Vice-President of Touring Shows explains their growth strategy, “After entertaining millions of people in sixty countries over the years, there are few remaining markets we have yet to visit.BAZZAR offers us new possibilities to introduce our brand. It enables us to continue our international growth in markets that offer great potential such as India and opens the door to exploring the African continent.”

Ashish Hemrajani, Founder and CEO of BookMyShow also sees the opportunity as an auspicious one for his company and India “BookMyShow has been and will continue to play a huge part in the transformative journey of the live entertainment category in India. While it has personally been a lifelong dream to work with Cirque du Soleil, their entry into India with BAZZAR will re-imagine this category. We are excited to give our growing customer base in India the opportunity to get access to this global phenomenon.”

With a small scale cast of around 30 (and a total cast and crew count of 62), a number that might be considered large scale to some circus companies,Cirque du Soleil ventures out in to new territory hoping to make an impact. But the effects of this strategy and the impact it will have upon the cultures they are touring to remains to be seen. Emmanuel Bochud, team leader of Programs & Partnership, Public Affairs & Community Relations is in charge of much of the work Cirque du Soleil does with Cirque Du Monde, the social circus arm of the corporation which partners with circus communities around the world to make a social impact on the region. In July, on a summer evening whenBAZZAR was about to have a special showing for employees only at headquarters under the big top, Bochud’s enthusiasm about this new venture was palpable. He said he hoped the show would make inroads and have impact on the communities by showing the western model of how circus is a respected art form and challenging the misconceptions Indian people might have of circus.

From various sources we were able to learn more about the show’s premise. In the story, the ‘cast’ is under the direction of the ‘Maestro’, a type A sort of conductor who wishes to run the show with a flick of his baton, but he is plagued by a mysterious company member dubbed the floating woman who questions and sidetracks his plans. By delving in to power dynamics and addressing the international contemporary arts trend of showcasing ‘process’, the show itself is using a meta ‘how to make a show’ trope–with the unironic moral of the story being that the diversity and strengths of the cast are what make it possible to build a full production for the audience.

The costumes themselves seem to be a conscious throwback to Cirque du Soleil’s early days, as are some of the disciplines demonstrated, such as fire breathing and stilts. But there are many other disciplines being represented too, from trapeze artists, Mallakhamb performers (Indian pole art) , acrobatic bikers, Cyr wheel artists, contortion artists, hair hangers and break dancers, to teeterboarders. The show has two performers of Indian heritage, one named Rajesh Mudki, a renowned Mallakhamb artist from California. Speaking to both the street art roots and current trends toward multi-disciplinary circus, they will have a singer and two musicians on stage as well.

BAZZAR is scheduled to premiere in Mumbai November 15th 2018, then it’s off to Delhi on December 25th 2018 before visiting Greece and moving on to the Middle East and Africa.