Conversations with Creators About Expanding the Nucleus of Contemporary Circus 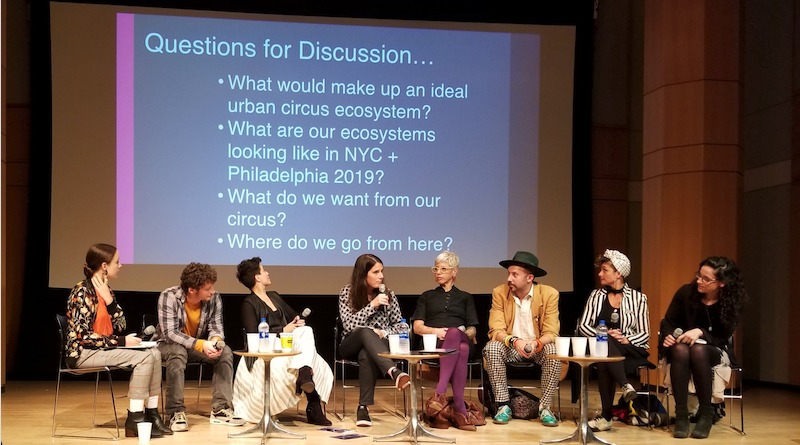 “This event is about the future.”

This is how Frank Hentschker, Executive Director and Director of Programs at the Martin E. Segal Theatre Center opened a day-long event celebrating the publication ofContemporary Circus, a new book co-authored by Katie Lavers, Louis Patrick Leroux, and Jon Burtt published by Routledge. The authors have compiled interviews with twenty-four contemporary circus artists and organized the answers into categories: Apparatus, Politics, Performers and New Works. Its aim is to bridge the divide between practice and theory.

The day was far more than a book launch. It was also a forum for local and international circus professionals to share their voices. Leroux, professor at Concordia University and École nationale de cirque in Montreal (ENC) , was joined by Ruth Juliet Wikler,Deputy Director of Programming at the Tohu in Montreal, to co-moderate the day. The event’s description reads, “Artistically-driven, politically astute, inventive, rebellious, hybridized: contemporary circus is quickly redefining the codes of what ‘circus’ means. The end of Ringling closed a chapter on the 19th century form, liberating artists to ask: after animals, after the clown car, after the ‘Ta-Da!’ — what remains?”

If circus has been stripped of its iconic elements which have been deeply rooted in our cultural memory, one might think that what remains is an unstable, fragile version of the art form. Rather, what remains is a supple, durable nucleus primed to expand wherever a contemporary artist’s will and invention push it.

If contemporary circus is in any way vulnerable, its creators, practitioners and theorists are not to blame. For, as this event proved, their mission is robust, their spirit vigorous, and their know-how is agile.

The day began at 2pm with three video compilations. The first detailed Leroux’s Montreal-based circus research projects. The second gave an overview of the contemporary circus scene in Quebec, and lastly we saw highlights from the companies featured in the book. Leroux and Wikler’s “director’s cut” commentary through the viewing rounded out the experience with key insider information. The videos were well suited as an introduction to contemporary circus and research, but they were preaching to the choir. The handful of people in the room were all circus professionals or otherwise integrated into the field. Which made me wonder, where was everyone else? Were they invited?Who is everyone else? Who would benefit from a day spent learning about contemporary circus?

Leroux mentioned an audience response at a cutting-edge performance by  Andréane Leclerc, and it caught my ear. “They didn’t know what they were seeing and didn’t know how to assess this.” I am fully committed to the idea that there should never be cultural speed limits for invention nor creativity, and therefore, feeling quite hypocritical, I asked Leroux if he thought circus was moving too fast for audiences to keep up. He said, no matter how radical the work, if it is framed in a way (via marketing, location, or total experience of the event) that the audience can code-switch (set some expectations based on previous experience) and therefore ease into the novelty, they will keep up. Good advice for artists and scholars alike who don’t want to leave their audience behind as we zoom into the future of circus.

Cardenas said, “We don’t have the luxury of having gone to circus school together. Our ecosystem has many legs. The greatest network is in human relationships.” All agreed that the general model for surviving as an American circus artist is comprised of income from nightlife and clubs to fund living and creative expenses while teaching at studios allowed artists access to free space to make their own work.

Wikler then asked if artists get stifled. Grinberg exposed a common artist inner monologue, “There’s a story we tell ourselves about our work, that it isn’t as valuable because we don’t have the resources to go to [international circus] festivals.”Schmalenberger quipped at NYC’s fickleness, “Once I started leaving New York, I became more valuable in New York,” and added in all seriousness, “There’s a mentality of not having people to look up to. So artists get stifled because they don’t know what’s out there.” A benefit of the NYC scene, Butch countered, was the “international flux of artists coming through NYC.” Miller contextualized circus making in the region when she said, “There is not a culture around process in NYC.” With the nightclub scene funding the practicalities of many artists’ lives, there is pressure to become a technically proficient performer and have a commercially pleasing act. This feeds a cycle in which the processes to achieve those products is valued over collaborative research, contending with show creation and a deeper kind of meaning making via circus. This is a birds eye view; if you step out of the nightclub, circus artists are making meaning in many urban spaces.

Throughout the conversation, the panelists ping-ponged from voicing frustrations to sharing their ideas about how to cultivate growth and sustainability in the urban circus ecosystem. Drammer offered, “We need multiple avenues for development to flesh out the ecosystem.” Gringberg agreed, “Making partnerships with other organizations and opening our ideas of whatis a circus artist is something that makes an ecosystem vaster.” Spreading tentacles is one approach, but Monseu reminded us that building infrastructure where you are is valuable too. “In giving back, we root ourselves in communities and open an exchange.” Butch said, “Ownership of space is so important.”

It was now 6:30pm, and the crowd had more than doubled. All attendees appeared to be circus professionals or already deeply integrated into the field. The majority of the audience and panelists were homogenous, falling directly in line with the overwhelming white world of contemporary circus. It made me question the purpose of the event. Was it meant to be a unifying moment about and for the people of NYC and Philadelphia circus? How would an audience of circus allies rather than circus practitioners have questioned the panel members? How would the community benefit from sharing these types of events with other artists or entrepreneurs? And where — oh where! — is the robust diversity in our creators, practitioners and scholars?

Hentschker moderated and opened by asking, “What’s a question you wish you were asked?” Jennifer Miller was not shy to reply, “What do you need?” The answer landed palpably in the room. True to Circus Amok’s mission to produce socially relevant work and question the status quo, Miller also insisted that as a community, “we need to figure out how to look globally south,” “get people of color into the circus much more”, and asked, “how do we break through the nationalism?”I felt my concerns about the art form had been voiced.

Contrary to the NYC and Philadelphia panel members that are fighting a very uphill and very constant battle for ownership of space and reliable funding, these creators and panelists are doing exactly what they wanted to be doing. In fact, most of them wanted less. They wanted to step away from the massive shows and tours and get just a few performers (injury and meltdown-resistant performers!) working together for a long time in order to really dig into conceptual possibilities. The grass is always greener.

There is a greater responsibility to take care of the art… there has to be a nurturing of art.

Hentschker asked what in the book Contemporary Circus surprised them, which digressed to comments about the art form’s relationship to language. Lifschitz said, “Putting circus into words feels like a violation.” Gandini fretted, “The more circus has conferences, I worry – we mustn’t drown in an ocean of words.” I believe the panelists are fully supportive of the wave of academic interest in contemporary circus, but also want to make sure that within the theoretical conversations we remember that there is an essential ephemerality to the form that can only be lived.

Snyder reminded us all, that in our need as artists to make the creations we need to make, as researchers to study the processes that intrigue us, and as teachers and producers to share circus with our communities, “There is a greater responsibility to take care of the art… there has to be a nurturing of art.” That statement makes me ask, how is what I do as a practitioner, creator, teacher and scholar taking care of the future of circus?

Just by asking the question, I suddenly feel my work situated in the global and historical context of the art form. It reframes the times when my work feels unseen or small. For every event counts, every conversation sparks connection, every book or show or article becomes part of the contemporary circus canon. As Hentschker said at the opening of the day’s events, “This event is about the future.” We are constantly crafting how the nucleus of contemporary circus expands. It’s simultaneously empowering and daunting, but I encourage you to ask yourself, what are you doing to take care of the future of circus? Professor, Performer -United States
Madeline is a NYC based performer, producer, professor, and choreographer specializing in aerial, acrobatics, dance and movement direction. She is an adjunct professor of Aerial Arts at Pace University, on staff at Aerial Arts NYC and The Muse Brooklyn and initiated the Aerial program at Muhlenberg College where she taught from 2011 - 2017. Her movement direction contributed to Circle Theater NYC’s production of The Mountain winning Outstanding Original Choreography/Movement, 2015. She co-choreographed The Battles, a musical voted by Broadway producer Ken Davenport one of the top 10 new scripts of 2016. Madeline's choreography has been presented at Dixon Place, Circus Warehouse, BAX, The House of Yes, Abron Arts Center, Times Square, The Flea, STREB, Galapagos, and The Muse. She received BAs in Dance and Theater from Muhlenberg College and is currently studying at NYU’s Gallatin school of Individualized Study where she is designing a master’s degree in circus studies with a focus on dramaturgy and creative processes. madelinehoak.com.
Madeline's profile
You are about to enter a members-only zone.
To share this article on your CircusTalk member page and connect with circus professionals from all over the world, sign up now. It's free!
Sign Up
Already have an account?
Log in