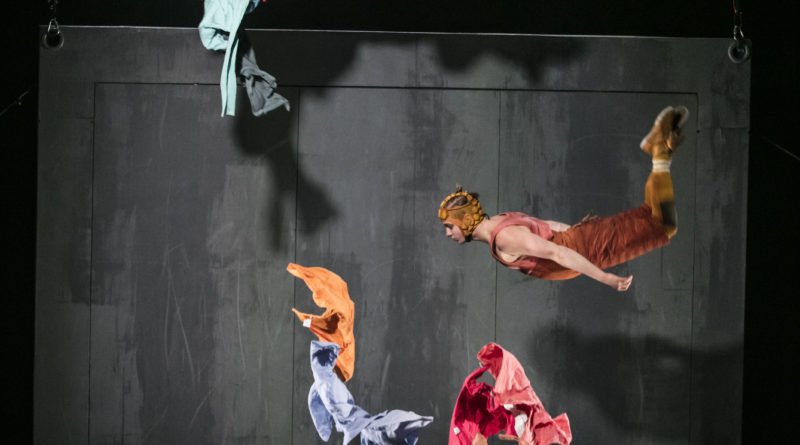 In her heartfelt introduction letter in the playbill to Cirkus Cirkör‘s show Limits, founder Tilde Björfors explains why the time for a show about boundaries, crossing boarders and belonging is so important for our humanity. Limits is currently touring Europe thru the fall.

Anything is possible! Boundaries are meant to be crossed. Limits are meant to be exceeded! We human beings can do so much more than we believe, if we dare to challenge our limitations! That was the feeling I had when I giddily walked out from my first-ever contemporary circus show, the French group Archaos’ guest performance in Stockholm when I was in my 20s.

In France, a few years later, I understood that this was not an isolated event but part of an established art form –  Cirque Nouveau. Here, the boundaries of the possible were being pushed. Here, there were practice facilities and even a contemporary circus college. Imagine if this had existed in Sweden when I was growing up? What would my life have been like then?

“When I was little, I used to think people moved around the Earth to keep the globe in balance. When we close borders and build fences, we cause the Earth to lose its equilibrium and tip over.”

Maybe the fact that I was a fairly frightened person was what made the boundary-pushing inspiration of contemporary circus so important to me. If this could make me want to be more daring, there were likely others who felt the same. My friends and I began dreaming of bringing contemporary circus to Sweden.

The journey from being a few naïve, young people with a dream to what Cirkör is today (in the media often referred to as a ”circus empire”) has been at once a tumble dryer and a roller coaster. Loads of hard work, risk-taking, sore muscles and growing pains mixed with magical moments. If there’s one thing we’ve seen proof of time and again, it’s that human beings have so much more capacity than we think. At Cirkör, we have created our own and other peoples’ jobs within a field that no politician nor recruiter could have imagined. We have seen dreams become reality, the fearful become fearless, the lost find themselves focused, chaos be transformed into order and control issues morph into trust.

For several years now, in collaboration with brain researchers and circus artists, I’ve been trying to understand how boundary-crossing works. Absolutely crucial to those of us who defy a limit, create something new or go where no one else has ventured is whether we are focused on the risk or on the possibility.

During the fall of 2015, I was one of many people in Sweden who tried to welcome displaced people in a spirit of common humanity. I was involved in establishing a transitional housing facility and also opened my own home. Hundreds of people. Hundreds of boundary-crossers. Every encounter a new story, a personal tragedy. I became aware of limitations within myself and society. Several times, I felt that I could not take in any more. There was no room. But every time I started to shut my door, one of the most vulnerable souls showed me there was still hope. It felt as if my heart was stretching and growing a little. Suddenly there was room for more! Contrary to what we often claim, our boundaries are supple. Both our hearts and our brains have an innate capacity for growth.

There’s a big difference between a circus performer who takes risks of their own free will, and an individual fleeing for their life. Someone fleeing has no choice. Yet the way they handle risk is the same. A person fleeing knows what it’s like to be afraid, while at once being brave. They know that when you venture out into the unknown, it is only the belief that it is possible that keeps you going. That faith in oneself and others is a necessity; there is no other choice. Planning, preparation and organization are all good, but to be able to handle all the unforeseen things that arise, it is even more important to be present in the moment.

It is shocking to watch Europe close border after border, when our circus has dedicated the last 20 years to pushing boundaries. The word “circus” is often used disparagingly, but I think the opposite is true – the world should practice more circus!

Play with the idea of Sweden as a body. . .  Imagine that the task facing this Sweden-body is to learn a new, advanced circus stunt. It is my conviction that if we exercise our Sweden-body, we will become better at dealing with the risks instead of, as is now the case, focusing so hard on them that we become inhuman. No one is forcing us, but we can choose to accept this challenge! And yes, for a while chaos will likely ensue, and our current order will be jolted a bit. There is always a moment of disorder when something new is created and our brain neurons have to connect new paths. But if we all stretch a little, perhaps we can transform these risks into possibilities for all of us. If we look in history’s rearview mirror, good things have generally come out of change. And usually, it is those who succeeded in maintaining a humane & compassionate perspective that we remember with respect! Imagine what the world might have been like if no one had ever taken a risk. At times a little breathing room might be a good thing. But to deal with the challenges we now face, it’s about time we get our Sweden-body into intensive training. Welcome to Cirkus Cirkör and our performance Limits.

To celebrate the closing of Black History Month on the Live Like An Acrobat Podcast, host Shenea Stiletto interviews the…

February 19, 2021 CircusTalkComments Off on JOB ALERT: Opportunities in the UK, Australia, and the USA

ARTISTS OF THE CIRCUS