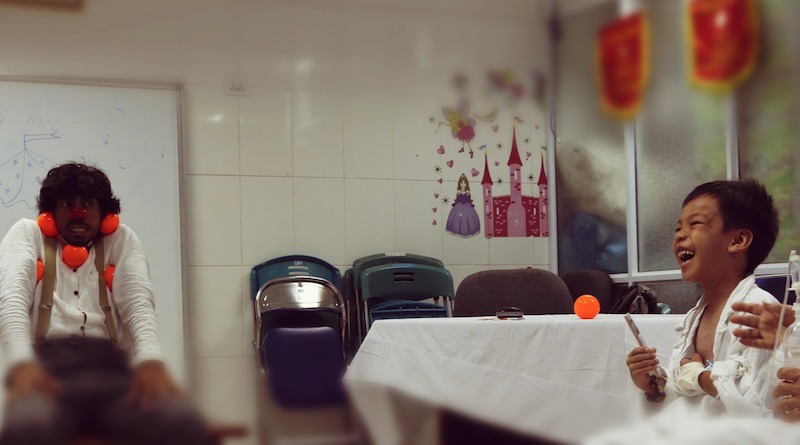 In times of climate catastrophe, refugee crises and Covid-19, the question of the responsibility that artists and scholars have is becoming increasingly urgent. What is the role of circus within society? How far does this form of art and entertainment correlate with historical and contemporary social interests? How does circus research position itself as a relevant field of research within academia in the 21st century? Those questions will be explored within the series Adventures in Circus Research–Facing a New Decade, curated by academic Dr. Franziska Trapp. By featuring circus researchers, we give them the space to explain the nature and significance of their research directly to the circus community and to highlight the practical impact of their research on the circus world and its relevance for society.

In the third article of the series, Maddly Guillaume, researcher and Doctor of General Medicine, gives insights into her research in which she analysed the impact of circus arts on our psychological well being. In opposition to the current tendency to counter health protection with performing arts, she argues for the need of an interaction between circus and healthcare.

The interest for circus in a medical practice came by chance, or perhaps because the idea has always been there in the unconscious imagination of someone who has visited big tops. It is while experiencing circus that I had the feeling that there was something important to bring to the patients… something that allowed me to leave the tent in  better condition than when I arrived…something that would give meaning where sometimes distress can lead you astray.

Statistics tend to support the weight of sadness in our society. Depressive illness affects 350 million people and is the leading cause of disability worldwide (1). Ecological or geopolitical crises play a dramatic role in explaining these data, and drug treatments have not been able to bring a guaranteed remission. There are already therapies that are using  artistic fields as a means to make people feel better. And I asked myself: Can circus arts in particular contribute to the relief of people in situations of sadness?

My medical thesis proposes an answer to the question why the circus makes us feel good, by studying the experience of patients during shows we performed in the frame of the association “J’ai Mal Partout – Cirque Médical” in collaboration with theAcademie Fratellini.  What moved me while practicing as a doctor was to understand how deeply each person is the creator of a unique reality. Well-being and quality of life are living phenomena that must be understood from the person himself. Chronic patients, victims of trauma, refugees, precarious and excluded persons, our study collected the perception at the end of the show of people in a vulnerable situation according to a complete definition of physical, mental and social health, whose common repercussion was expressed in the form of sadness or in medical terms as depressive symptomatology. The multicultural territory of the survey allowed us to highlight the gathering capacity of an intercultural and universal artistic expression. The results observe the positive feelings of patients in a festive encounter situation with a live performance in the relational ecosystem: public artists/organizers. Above all, they shed light on the benefits linked to the nature of the performing arts: joyful strength, being together, a circular audience in the stands, “big top effect“, poetry, clowning power, cohesive and sensational intensity, achievement and collective victory.

In pharmacology, it remains difficult to equal the well-being produced by the clown for hilarity among the audience.

The analysis identifies cognitive beneficials elements in care context, provided specifically by the circus. For Ph. Goudard, “The imbalance is the basis of a risk’s aesthetics in the circus” (2). The essential condition developed by this thesis is probably observed in the circus performer’s tentative efforts to rebalance, the optimistic circus dynamics, the one factor that seems indispensable from the first skip until achieving the triple salto. The measure of the exploit is the body. The work of the circus skill is a support that allows the body to perform unimaginable movements. The prowess pushes possibilities towards an augmented reality, it invites the spectator to reconsider the perception of his own possibilities. The “optimistic virtuosity” (3) that allows the success of an incredible exercise, gives patients encouragement in the fight against disease. The biomechanics geometry which elucidates athletic prowess, permeates the architecture of understanding reality in an intuitive dimension. Flying, “aerial skill ‘s ascending semiotic” (3) is perceived as a double victory: over the physical constraint of gravity and over the fear of danger. The clown composition joins the notion of circus skill: the risk taken by the red nosed clown entering the ring confronts the challenge of producing laughter for the spectator. The use of failure as a comic’s raw material, downplays and distracts from the error symbolism. It communicates a triple signal of empowerment: perseverance, resilience, optimistic objection of the impossible. It is a “clownish mythology” (3) that echoes with the sensitivity of vulnerable people and engenders positive behavioral adaptation for the development of unsuspected resources. Virtuosity gives the circus artist the image of a super-human, almost a superhero, it opens a breach towards a super reality that is able to distance daily sufferings. In pharmacology, it remains difficult to equal the well-being produced by the clown for hilarity among the audience.

The interface between vulnerable people and the show generates an emotional change. Our study identifies semiotic mechanisms; sound and choreographic landscape, luminous tonality, valorization of the comic for the physiological benefit of laughter, that are effective in producing a positive experience. Identifying them is a first step in stimulating and promoting their use in the creation of social circus shows. It demonstrates a measurable impact that focuses on the attention to be given on the content of the piece. The discourse collected from the patients interviewed underlines the central importance of a successful outcome. It concerns the control of risk as well as the dramaturgy of the acts, patients expect kind and non-discriminatory messages from the artists. The image of the body in entertainment participates in the diffusion of a model of perfection that can devalue alternative or fragilized bodies and calls for a fair representation of diversity on stage, including themes from gender to minorities. Artistic creation reflects the world and cannot be limited to therapeutic use. However, the artist engaged with the fragile public must be able to find documentary support. Elaborating a standard of performance for vulnerable people would expose them to reductive discrimination.

The encounter with circus research and community is fundamental for the construction of ambitious solidarity programs. “The joyful emotions produced by a circus show demonstrate specific contributions in elevating quality of life during the lived experience, they can contribute to the improvement of the person ‘s health state. The circus arts appear as a resource for resistance to fear, sadness and despair, allowing resilience in alterations and traumatic life courses”(3). This jubilant blooming reflects the positive power of the circus on the cognitive status during a spectacular encounter. Measuring the artistic impact on the homeostasis of consciousness, on a collective scale, tells us about the responsibility as well as the power of intervention of cultural contributors on the state of our civilization’s health, both at the individual level and for a caring society projection. The concrete support of this thesis of medicine in practice, and the expertise of its conclusions provided from the vulnerable person herself, accredits the circus relevance in caring-processes.

Together we can touch the stars, perhaps this is what the circus tells us, the story of a collective prowess carried by the clamor of applause, which triumphs over impossible constraints that it invents for itself; where performance is an alibi, that of being united in a somewhere. At a time when health protection could appear to be opposed to the performing arts, this study argues for an ideal of interaction between circus and the needs of complete health for the world in coming.

To continue the dialogue, these results are presented in Médecine et cirque,  Montpellier,Sauramps Médical, 2020 directed by D. Barraud and Ph. Goudard, founders of the French Society of Circus Medicine and during its seminar “Recherche médicale sur le cirque en France: bilan et perspectives” on October 9th in Montpellier. The full version of the thesis will be available on the Atelier National de Reproduction des Thèses website in October 2020. You can link the Medical Circus project here. Doctor -France
Maddly Guillaume is a Doctor of General Medicine. Initiated to funambulism, she founded the Association "J'ai Mal Partout - Cirque Médical '' which brings together the performing arts and health care areas. She defended her thesis "Culture and Health with Circus Arts" under the direction of Pr Philippe Goudard in April 2020 at the Université Sorbonne Paris Nord.
Maddly's profile
You are about to enter a members-only zone.
To share this article on your CircusTalk member page and connect with circus professionals from all over the world, sign up now. It's free!
Sign Up
Already have an account?
Log in

Maddly Guillaume is a Doctor of General Medicine. Initiated to funambulism, she founded the Association "J'ai Mal Partout - Cirque Médical '' which brings together the performing arts and health care areas. She defended her thesis "Culture and Health with Circus Arts" under the direction of Pr Philippe Goudard in April 2020 at the Université Sorbonne Paris Nord.