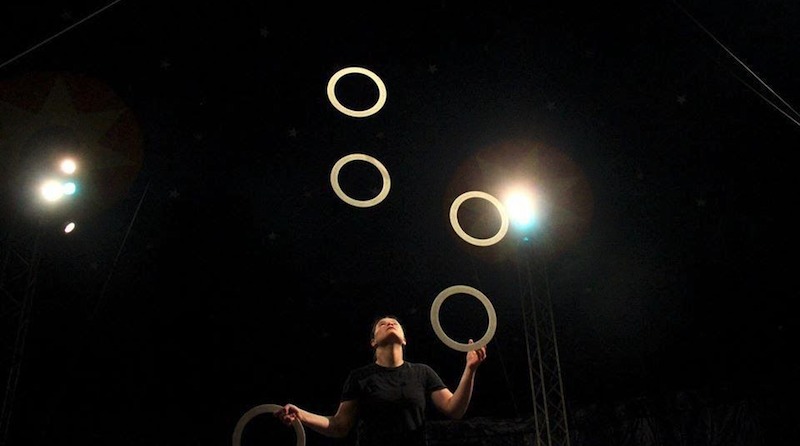 It’s an uncertain time for all of us in the circus community, not the least of all the graduating students of 2020. Many are still unsure of when their graduation shows will be and what their future holds. We have decided to continue as planned with our 2020 “Meet the Graduate” series in order to be able to feature these artists and the hard work they have put into their final year at their circus school. Our final graduate in the “Meet the Graduate” series is Circadium School of Contemporary Circus graduate, Delaney Bayles.

Delaney Bayles started juggling at the age of 13 after her uncle showed her the basics of three-ball juggling. She grew up loving to juggle and spending all of her free time doing so. After she graduated from high school, she was introduced to circus by becoming a part of Circus Smirkus’s 2016 summer tour. During that summer, Delaney fell in love with circus and decided to pursue it professionally, and over the last three years, she has attended Circadium School of Contemporary Circusin Philadelphia, Pennsylvania. Delaney has undergone the virtual graduation from Circadium, and is hopeful to join her fellow students in a thesis showing at Circadium in December 2020.

Delaney Bayles has also won gold medals in the International Jugglers Association’s juniors competition in 2015 and teams divisions in 2019. In addition to that, she won the advance overall championship at the World Juggling Federation in 2016. Delaney has also been featured on the top 40 jugglers annual list for the last five years.

Delaney says she learned a lot at circus school, “I was part of the first-ever class at my school which led to a lot of unique experiences and opportunities. I believe the most important thing I learned during my time at school was what it means to be an artist.” Before Circadium, Delaney says she felt more like an athlete who sometimes performed on stage. This led her to have a number of conversations with her teachers about what it really meant to be an artist and whether or not she was capable of that. Over time, Delaney let go of some of the power and prestige she held and now believes that she can be an artist if she simply decides to make work that she is passionate about and invested in. She says that her growth as an artist is not finished though, and is an ever-evolving part of my life that she works to be better at each day.

Delaney developed two acts during her time at school. They share some of the same choreography but have very different performance goals. The act shown below is the more upbeat of the two.

During her time at school, Delaney was greatly encouraged to add movement to her static toss juggling. While she was in her second year, she was instructed to make a piece that was one hundred percent movement with only the most basic throws and catches of three clubs. That act became the root of her graduation act and once she had added back in her juggling technique, Delaney found inspiration from martial arts, tai chi, and punk rock music. Delaney says, “It was a very freeing experience to expand my horizons and helped me grow as a performer.”

Delaney had one of her teachers tell her that everything she wanted to achieve was possible, but just maybe not on her envisioned timetable. Covid-19 has certainly proved that to be true. While she awaits the Circadium thesis show in December, she is taking online academic classes to stay busy. Delaney also continues to work on her act and skill set as a juggler while we all wait for circus opportunities to start up again. Community Coorinator, Circus Student -United States
Sierra Rhoades Nicholls is the founder of CSAW (Connecting Circus Students Around the World) and is the former Community Coordinator for CircusTalk. Originally from Missoula, Montana, Sierra was a gymnast for 10 years before pursuing a professional circus career. Sierra currently attends Circadium School for Contemporary Circus where she specializes in handstands and partner acrobatics.
Sierra's profile
You are about to enter a members-only zone.
To share this article on your CircusTalk member page and connect with circus professionals from all over the world, sign up now. It's free!
Sign Up
Already have an account?
Log in

Sierra Rhoades Nicholls is the founder of CSAW (Connecting Circus Students Around the World) and is the former Community Coordinator for CircusTalk. Originally from Missoula, Montana, Sierra was a gymnast for 10 years before pursuing a professional circus career. Sierra currently attends Circadium School for Contemporary Circus where she specializes in handstands and partner acrobatics.