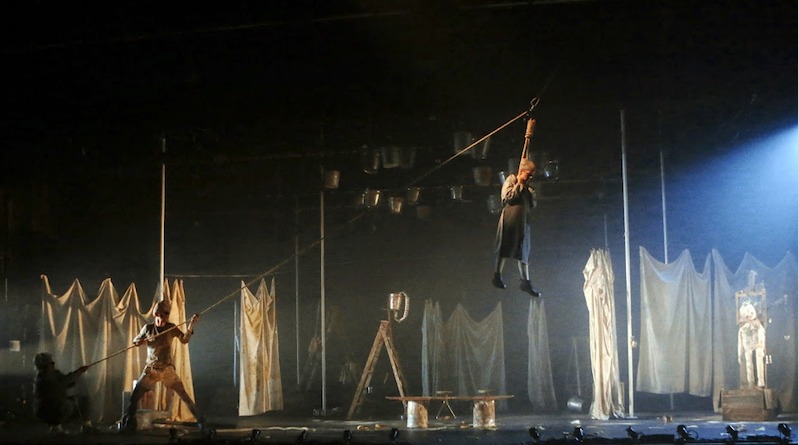 Three clowns with black noses dominate the stage, busily manufacturing misery. Their monochrome world is colored only by two things, the red noses of the previously happy clowns they have removed them from, and blood. It’s not a light-hearted romp these clowns turn out then, but rather a deep dive in to the dark heart of man—with a few u-turns in to the absurd and hilarious of course. And what a fascinating dive it is! 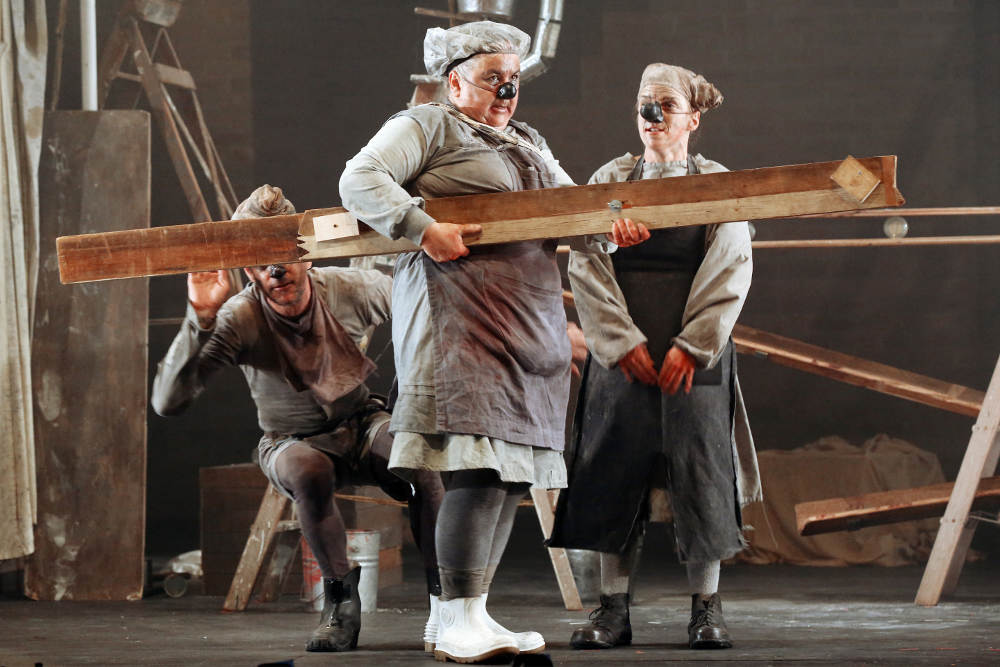 The Long Pigs is another Australian wonder that defies genres, although it would be easy to peg it as physical theater, that is only the mode of expression that these three seasoned physical performers use to push boundaries and defy our idea of what can be expressed without words. Surreal, absurd, dark and riveting, the bouffant clowns take us on a strangely familiar stroll around their ramshackle slaughterhouse. And as the riddle of what they are doing is slowly revealed to us (ok, in truth, it doesn’t take long to figure out they are harvesting clown noses), the mystery of why they are doing it becomes more complicated.

The reassuring comic machinations of clowns squabbling over power in a work room, envying each other’s meals, and waddling to and fro is overlaid by contradictory powerful imagery and a macabre disruption of our expectations. It would be easy to dismiss their dark antics as ‘scary clown’ material to frighten the kiddies and to besmirch the memory of classic circus clowns, but their themes go so much deeper. Watching them systematically and fanatically dismantle the world of happy clowns, you get the sense that you have experienced this story unfolding before, maybe even on a day-to-day basis in your own world. The innocent way in which they approach subject matter, for example, while playfully smashing the taboos in Christianity, or towards cannibalism to name two, are often times as jaw-dropping as they are refreshingly horrifying. It’s as if the veneer of hypocrisy has been wiped away, and all you are left with is rawness and shock. 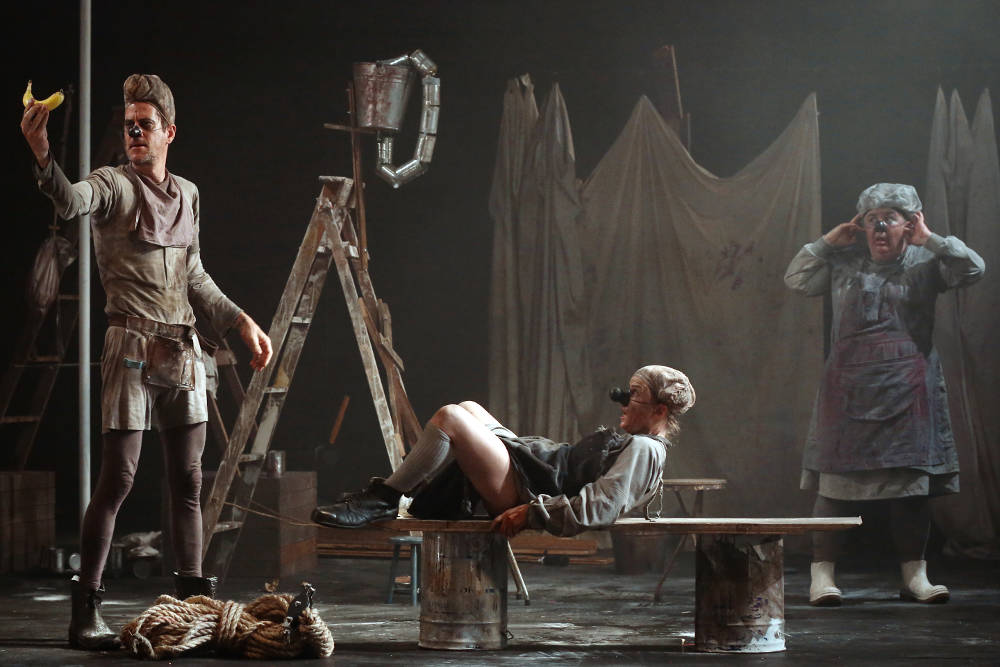 Artfully directed by Susie Dee, The Long Pigs ascends in to the realm of great, mind-bending theater. Light, set and sound are all tweaked to heighten our sense of discomfort and horror, with the set having an extra element of being also full of good clown gags and a Rube Goldberg machine. Clare Bartholomew, a co-creator and performer in the show, is a seasoned clown like her fellow castmates. Among other things, she is well known in Australia for being half of the beloved pop/punk comedy clowning duo Die Roten Punkte,and as head pig/clown in this production she is enthralling. Co-creator and performer Nicci Wilks, who started off with Flying Fruit Fly Circus back in the day before moving on to Circus Oz and other great circus productions, makes for the most terrifying of all the clowns (and is the surprising protagonist or anti-hero of the show), all the more impressive when you discover she wasn’t simply at Edinburgh to be in The Long Pigs but also was performing in a second production, the renowned show SHIT by Patricia Cornelius. Lastly, we have lumbering and intense presence of Mozes, who began his clowning career in Circus Space in London before moving on to touring with Circus Oz and being a core member of Company 2.

These three performers recapture the transparent inner workings of the clown psyche and use it to reflect back to us the machinations of capitalism, consumerism, our inherent greed, and the absurdity of what we chose to value as members of society, and that’s a tall order for three little clowns. The Long Pigs plays at Assembly Roxy until August 25th.

Editor-in-Chief at CircusTalk.News, Writer -USA
Kim Campbell is the editor of CircusTalk News. She has written about circus for Spectacle magazine, Circus Now, Circus Promoters and was a resident for Circus Stories, Le Cirque Vu Par with En Piste in 2015 at the Montreal Completement Cirque Festival. She is the former editor of American Circus Educators magazine, as well as a staff writer for the web publication Third Coast Review, where she writes about circus, theatre, arts and culture. Kim is a member of the American Theater Critics Association.
Kim's profile
You are about to enter a members-only zone.
To share this article on your CircusTalk member page and connect with circus professionals from all over the world, sign up now. It's free!
Sign Up
Already have an account?
Log in