With nearly four decades at the forefront of groundbreaking entertainment, Cirque du Soleil will debut a completely new and wickedly fun Las Vegas production – Mad Apple – at New York-New York Hotel & Casino on May 26, 2022. Mad Apple will be a delicious Cirque du Soleil cocktail of music, comedy, magic and mayhem that puts NYC nightlife under the Las Vegas lights.

Featuring comedian Brad Williams, freestyle rapper Chris Turner and vocalist Xharlie Black amongst the incredibly talented cast of 39 people, Mad Apple will be a nonstop New York thrill ride from the moment guests enter the theater. From pre-show magic and boozy libations at the stunning stage bar, to the band playing hits inspired by NYC’s most famous musicians and composers, Mad Apple will blur the lines between circus, live entertainment and New York nightlife culture.

“Mad Apple will deliver a night of joy and entertainment with the thrilling backdrop of New York City,” said Simon Painter, Mad Apple concept co-creator and executive producer. “We’ve taken inspiration from the city’s rich musical history, legendary comedy scene and unrivaled nightlife, and combined it with the wow factor of Cirque du Soleil to create an experience that will feel like a giant party from start to finish.” Mad Apple is the first Cirque du Soleil production in creative collaboration with Painter and Neil Dorward, the show’s co-creator and director. Painter and Dorward have created several celebrated productions including The Illusionists. Painter’s company The Works was purchased by Cirque in February 2019.

Featuring six brash acts and a dynamic makeup of musicians, dancers, comedians, magicians and circus performers, Mad Apple rewrites the script for Cirque du Soleil entertainment. Each act will reflect a different nocturnal side of New York, brought to life by underground stars, high-flying acrobats, street performers, up-and-coming entertainers, and the biggest musical hits to come out of the City.

Eric Grilly, Cirque du Soleil president of resident and affiliate show divisions, said, “We’re excited to share a completely reimagined experience from Cirque du Soleil with a show that fuses the spirit and creativity of the two ‘Cities that Never Sleep.’ Cirque has long been known for celebrating the limits of human ability, and Mad Apple will continue this revered tradition. To this, we’re adding acts and artists you wouldn’t expect to find on a Cirque du Soleil stage. The end result will be exactly what we’re known for – creative, astonishing and enjoyable live entertainment.”

New York-New York’s president & COO Mike Neubecker said, “There couldn’t be a better fit for a resort inspired by New York City than Mad Apple. We are beyond thrilled to welcome this new evolution of Cirque du Soleil and know our guests will be in for the time of their lives.” 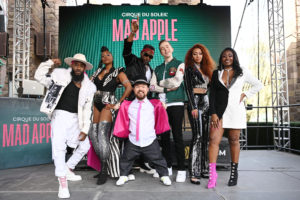 Lead Comedian Brad Williams. Marking the first time a standup comedian will headline a Cirque du Soleil production, Mad Apple will debut with comedian Brad Williams. Once described as “Prozac with a head” by the late Robin Williams, Brad William’s ability to make humorous observations on disability, relationships, sex and race have won over audiences and proven anyone can overcome their shortcomings.

Musical Director and Lead Vocalist Xharlie Black. A character from the mind of Eddie Cole, who inherited his velvety voice from his great-uncle Nat King Cole, Cole’s alias Xharlie Black will lead a group of musicians and singers to reimagine the most iconic songs from New York’s storied history of music. A multi-talented musician and producer, Cole has spent the past 10 years touring the world as drummer/vocalist and then co-musical director for the New York legend Nas. Xharlie Black is an homage to Nat King Cole and cousin Natalie Cole, and the many artists with whom he’s had the honor of sharing the stage.

On this episode of the Live Like An Acrobat Podcast celebrating Black Music Month, host Shenea Stiletto interviews Xharlie Black,

June 14, 2022 CircusTalkComments Off on Cirque Bijou’s Reflections From The Jubilee Pageant