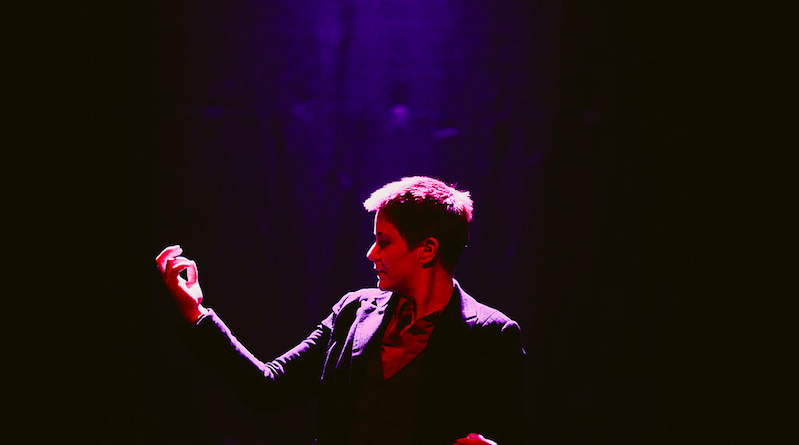 In Chicago, eight circus students just completed their second year of the pro training program at Aloft Circus Arts, a circus school that is housed in a refurbished church in the cities’ hip Logan Square neighborhood. Although their final presentation was a culmination of two years of hard work in a program that featured many coaches who helped them hone their skills and develop their solo acts, for the last two months their focus was on putting together a show with visiting creative director Emma Serjeant. She was the latest in a series of guest coaches to come to town and work with the students. The work involved moving beyond rehearsing the student’s own carefully crafted solo acts, to building an ensemble, working on group numbers and constructing the set for their show, aptly namedFlock. Serjeant is part of the new ilk of contemporary circus artist turned director (and in her case, choreographer, producer and consultant as well)whose work regularly takes them around the world. Hailing originally from Australia, she defines her company ESP as a “ A production house that extends the definition of circus by creating hybrid performances. Performances in the ESP repertoire draw on different styles and training methods such as dance, martial arts, physical theatre training and circus, both traditional and contemporary.”

Both family members and circus lovers would soon come to see what two years of training had taught the pro training program students and Serjeant was certain that they would be surprised at the show. “Flock is a piece of work unique to these individual artists and unlike anything else currently being performed in Chicago,” she declared. Serjeant knows this, because she’s been to Chicago a few times in the past few years to teach and perform. An early graduate of NICA who went on to do some astounding work with Circa and later to become co-founder and executive director of the wildly popular Casus, a company that has toured the world many times over and that produced their showKnee Deep for the Chicago Contemporary Circus Festival in 2015, Serjeant returned in 2017 to be part of the Moment Festival and her style meshed so well with folks at Aloft that she was invited back by school director Shayna Swanson to direct this year’s class of graduates. After a few visits, she feels she understands the Chicago approach to circus, as she sees it has some things in common with Australia’s attitude, “There is a tenacity and acceptance of independent working models here much like Australia. There is a risk taking element to Chicago , punk, feminist, somewhat anarchist circus style here, that i can relate to Australian early days ’new age’ circus with the likes of Circus Oz, Rock n roll circus and Vulcana Women’s Circus.”

Sergeant admits being a traveling director has its challenges. Walking in to a new setting stretched her creativity and adaptability as she approached a new crew of students, had to work within a limited timeframe, and create a set and tone for the show, essentially presenting the cast with some novel challenges. All of this for a group that has been working together for 24 months with their own rhythms and set of coaches. Yet she was certain their training had prepared them to rise to the occasion and confident that all of their hard work would be revealed in the show. She described this process of collaborationl, “It is a slightly strange beast to make a show that is not entirely your vision, as the main ‘feature acts’ are coming from the culmination of the training received with the Aloft Full Time Program, so these solo acts have been preconceived before my stepping into the creative conversation. My job was to come up with a concept that worked all of those elements into one cohesive piece.” But she found the theme pretty quickly once she started working with the full-timers, “The show is about the human desire for belonging.Flock is about societal undercurrents, the notion of family, the need to belong and to be accepted (accepted into, having a place, belonging to something, and what happens when you don’t have that need fulfilled), isolation, human kindness and unkindness.”

Although she has co-directed on several occasions, the modest Serjeant had some flutters about her new role as first time solo director and becoming part of this temporary flock, “I am, after 15 years of an awesome career on the stage, journeying into directing and devising and although I have been fairly fortunate to work with some incredible mentors and collaborators in my early stages, I am still fairly new to occupying the ‘directors’ chair.” Yet her work as ‘director abroad’ is part of a healthy trend of international exchange amongst circus directors and dramaturges that has been unfolding as the networks of professional circus schools and circus organizations have become more savvy about skill sharing, cross pollinating groups not just to broaden everyone’s experience but also to advance the art form of contemporary circus. This is a natural and possibly even a desired progression indeed, especially for circus artists making steps in to the directing world who are already quite accustomed to the itinerant lifestyle demands of circus.

She left Chicago after two months of this giant, collaborative project feeling as if it were a win-win. The students gained an outside eye and some welcome direction and Serjeant found the core ofFlockby going to heart of the group dynamic, “These artists have created a family here, working together every day for the last 24 months and I wanted to showcase a little this idea of circus families within the context of modern circus and not just in the traditional sense. These artists have risked their lives and their emotions on a daily basis with each other and this I wanted to celebrate and adopt as a theme within the show.”

Serjeant describes the resulting show as a work that is unique to the individuals involved and also distinct in the Chicago circus scene, to which she admits “I feel very privileged to be here working with these young, new artists and to try something new. I hope to give the audience and the performers an experience to cherish and enjoy long after the lights go down.” But just like the traditional circus family to which Serjeant alludes, when the show is done, moving down the road is inevitable and she is now off to the next adventure, consulting with a show in China and expanding her promising directing career as she goes.

To learn more about the show Flock, read  the full review of the show at Third Coast Review.