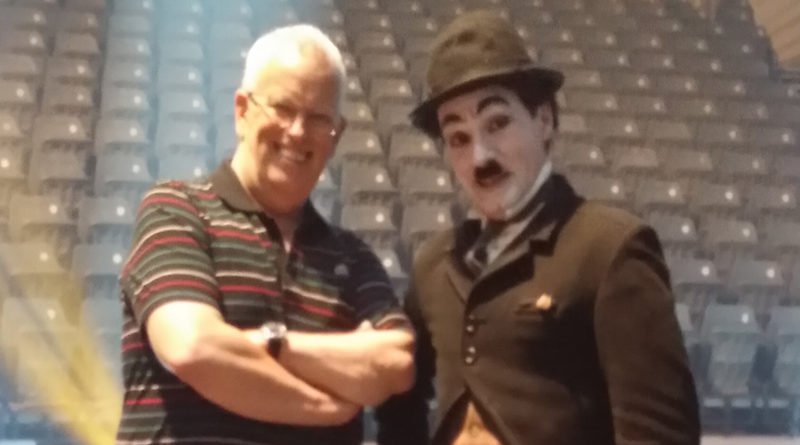 Eugene Chaplin has been a successful stage manager for opera and ballet, a recording engineer for famous rock and roll bands including the Rolling Stones and Queen, a documentary filmmaker, and president of Switzerland’s International Comedy Film Festival, but, he says, “my real love is traditional circus.”

The child of legendary clown Charlie Chaplin (and the grandson of Nobel-prize winning playwright Eugene O’Neill) says he inherited his love of circus from his father. Growing up in Switzerland, the family lived near a Circus Knie tour stop. When the circus came to town, his father would invite the Knie family and all the circus artists back to the house for late-night drinks and a party. Chaplin was inspired: “From a very young age, I got to see these amazing artists. Circus is about a dream. One time, a Russian performer brought his bears to the party. He had a crocodile act, and he would hypnotize crocodiles in our house.”

Chaplin remained a circus fan as he grew up. He worked in the entertainment industry, but says it’s “pure luck” that he has become so involved with circus over the past ten years: “One day, there was a circus festival in the next town. They asked if I wanted to be part of the jury. In that festival, practically ever Swiss circus was represented: Knie, Nock, Skylight. I met Mrs. Nock and became friends with the family.” He must have made a good impression. After the festival, Nock called Chaplin and asked him to direct a new show. He wound up staying on as artistic director for eight years, traveling with the show eight months each year.

His role in Circus Nock introduced him to the worldwide circus community and soon he found himself judging six or seven festivals a year. “Circus is a big family. You start to know everyone.” Chaplin was particularly encouraged by a festival for young artists in Monaco, right after the main festival. “It was refreshing to see so many young, talented kids from all over the world. In Europe, people talk about whether circus will survive its problems, for example with animals, but when I see so many great young acts, I think the circus will survive.”

Around 2010, Chaplin was contacted by a representative of Canada’s Festival de cirque Vaudreuil-Dorion who wanted him to create a circus competition to add to their existing circus festival in the small town of Vaudreuil-Dorion, outside of Montreal. Chaplin was delighted: “The thing I love is that the people really wanted it. It was so nice to be able to help them out.”

The first thing he requested was a tent, and the festival obliged, even naming it after the competition’s founder. The Eugene Chaplain tent is now up seven months a year and provides a venue for theater and music productions and special events in addition to the festival and other circus shows. The only permanent circus tent in the country, Chaplin says that unlike European circus performers, the Canadian artists weren’t used to being surrounded by the audience but soon came to appreciate the traditional venue. In addition to cash awards, the winner gets the Charlie Chaplin prize, and the second-place act garners the Golden Grock, previously awarded at the International Festival of the Circus of Tomorrow in Paris. Third place is the The Vaudreuil-Dorion Trophy, and Chaplin occasionally also bestows a special Eugene Chaplin award at his discretion. Chaplin’s goal for the festival is that it help connect acts to producers and presenters and get the artists jobs in circuses.

Chaplin also helps other types of artists and encourages cross-pollination between circus and other genres. Before the 2014 festival, Chaplin had been lamenting the loss of live music in circus. “I love music, but in France, a lot of circuses are cutting out orchestras because most of the artists have their own music. The traditional orchestras are disappearing, which is a shame.” Chaplin visited a local music school and enlisted their 18-piece orchestra (with a 14-year-old girl singer!) for the festival. To celebrate the 100th anniversary of his father’s Little Tramp character, the program included a lot of Charlie Chaplin music. The modern Chaplin enjoyed watching the young musicians play the music his father had composed and performed to a century earlier. The show also included a duo tribute act between a trapeze artist and a performer playing the Little Tramp. What’s next for this multi-skilled man? For now, festival logistics are taking up Chaplin’s time, but he’s already planning for the future. Although the Eugene Chaplin tent can’t operate in the brutal Canadian winter, Chaplin has long wanted to create a Christmas Circus for family audiences and may produce one in another venue. “Christmas and circus is a nice marriage,” he explains, “People like it because it’s a very nice family thing to do.”

Speaking of family, Chaplin isn’t the only member of his family in the industry. His older sister Victoria and her husband Jean-Baptiste Thierrée founded a series of circus companies in France in the 1970s that have been credited with spearheading the contemporary circus movement. “My sister Victoria and her husband were among the first ones renewing circus arts and presenting them on stage instead of in a tent. All her shows have a story. They were the first ones to have this concept of how their show should be, which had nothing to do with traditional circus. It has jugglers, transformation, and trapeze, but not in the same way as other circuses.”

They were also among the first circuses to perform without animals. Their current company, founded in 1974, was originally called Le Cirque Imaginaire, and Chaplin explains how the show sprung from the couple’s imagination: “The whole idea behind it was to pretend that they had quite a big circus. … Two people imagined themselves in an imaginary circus. … One does magic and one does transformation: Instead of lions and elephants, they had [imaginary] chickens and rabbits.” Le Cirque Invisible still tours internationally, and the couple’s children, Aurélia and James Thierrée are both accomplished performers.

“I love being part of the circus family,” says Chaplin, and although he’s clearly a proud and loving brother and uncle to his immediate relatives who are also creating and performing circus, you know he’s talking about an even bigger family around the world, a family that also loves having Chaplin in it. August 4, 2020 Kim Campbell, Emily Holt y Fiona BradleyComments Off on The Next Wave in the #METOO Movement, Listening to Victims’ Voices in Circus