LEME Contemporary Circus Festival 2020 – In the Beginning, There Was Matter 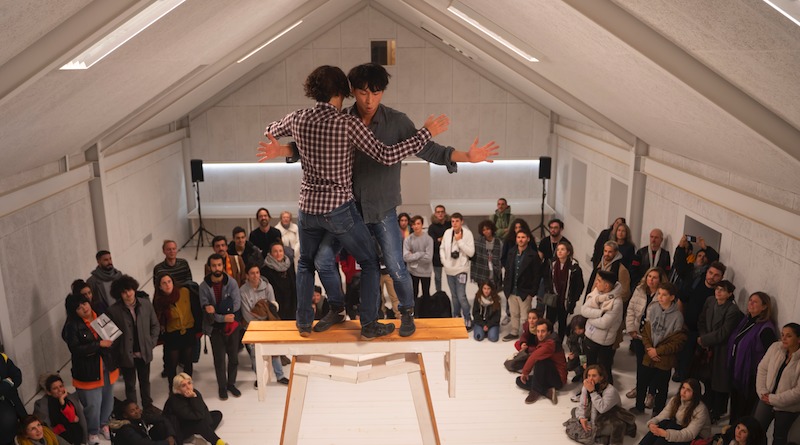 “In philosophy, matter is the manifestation of reality, as opposed to the idea (Plato). Embracing reality. We chose matter as a motto in a festival that increasingly appropriates the territory, taking advantage and making the most of its peculiar strengths to be different. A body is defined with a limited portion of matter. We reject boundaries and transform ourselves into a volatile body, ephemeral yet infinite in its manifestation and strength. Matter as a deformed scenery, things as they are not, flesh uncertain if it is body or scenery or history. LEME is in place.” 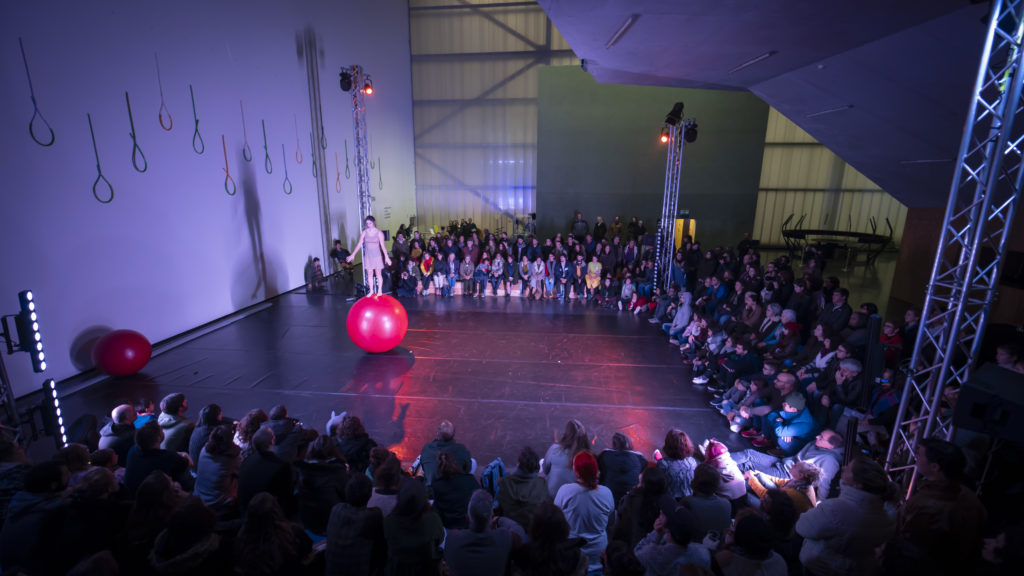 The second edition of LEME Contemporary Circus Festival took a fresh look at what is happening in contemporary circus and bound it all together with a strong theme– matter, as a solid, organic force present on stage. Following the laws of physics, through objects or external connectors, the performers became the opposite force of matter, and played with these forces in many different ways. Throughout the festival, the theme held strong to this focus on matter, either the need to control matter or to flow with it was a topic that bound all of the players together. As the fascination of risks both obvious and hidden were explored, matter took on new meaning. The presence or absence of “the other” was embraced, since one of the essential dynamics in circus is to measure with “something else” through metaphor. LEME was the force of gravity that kept us all together. The audience hung on to the overall vision– and the festival really explored ‘matter’ well with diverse artistic choices.

The organizers, Bùssola and 23 Milhas, envisioned LEME as an international benchmark for the evolution of the contemporary circus, so they looped in South Korea, Spain, France, and Ireland, through governmental entities, asking them to join the festival, which allowed for a broader program and an expansive range of views. This year, LEME had the participation of 7 countries in total. It continues the tradition to dedicate a focus on partner countries, (last year was Belgium and Catalogna, this year was South Korea.)

There were 16 shows in total, of which eight were national prèmieres and one was a debut. There were also six itinerant presentations as part of the application to the Navegar section – as a result of an open call to Portuguese circus schools to present their short projects, and to host various national school student’s works, as well as three workshops, two training courses and two artistic residences.

The Festival took a further leap forward towards a broader vision with discussions of Circus Forum on December 6th, thanks to the participation of Circostrada. There was an informal chat with the artists about their practices, telling about their individual creation experiences and goals. It was thus possible to listen to processes of conception and the realization of circus productions from both an intimate and a collective point of view, also comparing the different practices in relation to their countries’ origins, or the two continents, Europe and Asia. According to Bruno Costa, co-director of Bùssola, “We found out that South-Korea is very similar to the Portuguese reality in terms of circus recognition and in the needs to develop the trainining and dramaturgy challenges. In that way, it makes sense to understand what Korean artists are doing and what the Portuguese creators can learn with them.”

Since matter is the theme of this edition, the number of shows in which a solo performer interacted with matter was singular. Whether it was a central clay block in Fang by Animal Religion, or the equilibrium spheres of La Chute by Lapso Cirk, the rubber tubes of Hose by Daniel Sobra, or the refined show Materia by Andrea Salustri, the conscious relationship between the visible performers on stage and their invisible connection with physics created a synergy that energized the audiences on all four days of this edition. 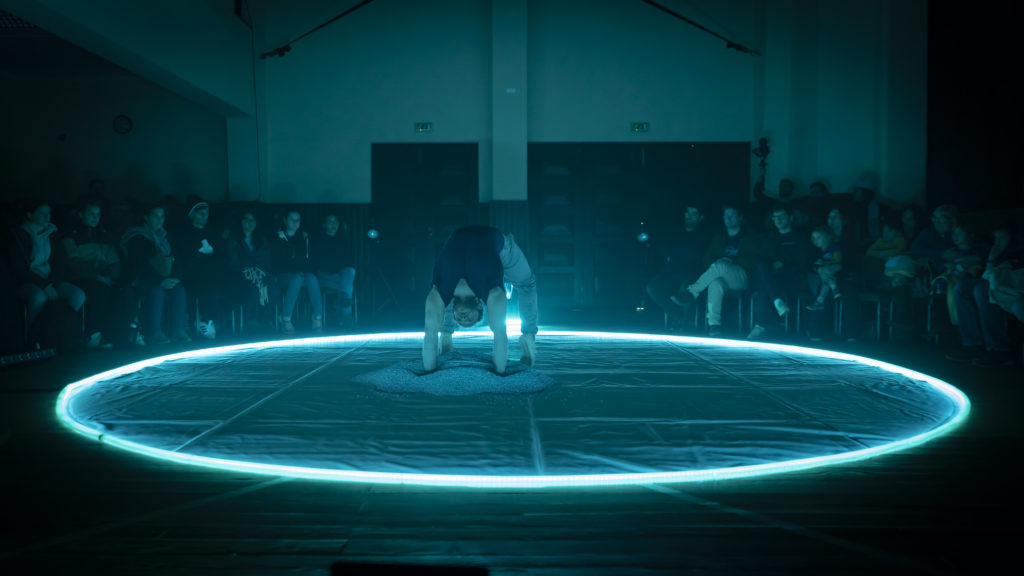 Daniel Seabra is a Portuguese experimental artist who connects sounds and lights in the service of his incredible technical skill on stage. “Some people think my job is one, but the reality is that we are a collective. On stage, you see me and my acrobatics with unconventional materials, while the creation is moved by three people simultaneously and sounds and lights are combined with writing. I am more in touch with the performing arts, installations, and a 360 ° artistic dimension than with the circus tool itself,”  Daniel Seabra said in dialogue with Stefan Segreto Aguilar during the Circus Forum. Co-produced by LEME festival, Hose is intensity itself. A density of tension that becomes fluid thanks to the wonderful electronic music and lights that change and synchronize during each action. We feel the power of an unconventional body that climbs and dominates a structure of industrial pipes which turns out to be a circus apparatus. What is apparent is the flexibility and fearlessness of the performer who launches himself from above and who knows how to fall.

The perceptions of three coordinated minds is clear in Fang, by the Spanish company Animal Religion. At the center of the scene is the performer, while the sound and light designer is always visible on the sides. Fang is the encounter between mud and matter, working through skin contact, exploring the third dimension, a third thing, generated by the meeting of the two entities. It is pure research about the body and the overcoming of its limits until it becomes something else. The manipulation of vocal sounds and light points becomes one with this mutable live performance and an unpredictable, organic track, which results in the flaking and reconstruction of the clay cube each time in a different way.

In this show, time and space seem to be distorted in favor of an apparent slowness. Materia reveals itself as a magical essence that listens to the ongoing sensitive phenomena happening on stage, balancing light and darkness. Andrea Salustri plays with an ethereal element, the air, and the juggling that controls it. The LEME program explains “The third protagonist, polystyrene in different forms, is manipulated from a different perspective, balancing the movement (and space) of the object with the interference of the handler.” Juggling meets with the modulation of gravity untill matter dissolves in an immense darkness. At the end of the show, Salustri thanked his whole team. We discovered that the designing/building of the set took about 9 hours! He explained how the structure of the interactions was prepared through the set, but that the motion and actions of the juggling objects could not be controlled, creating the spontaneous live perfomance. In this presentation, the object itself is free to take initiatives and nothing is ever the same.

With special attention to the circus made in South Korea, with Signal and Impulse shows, matter became all about scenography and innovative structure, capable of supporting the hazard and spectacle of large outdoor locations. The search for balance through scenography was the theme of these two performances. In a country where there is no professional training, contemporary circus education is found mainly on the internet. “As a choreographer, I have always been attracted by new languages, and with his transferable skill, circus seemed to be the ideal tool to express my poetry,” explained director Sung-tae Jung. Signal investigates the separation and union between individuals through three paintings, three actions that culminate in a final scene in which the three performers fly around jumping from the springboard of an imposing structure. The festival ended with Impulse, a very impressive visual show with two metal structures and a floating ladder. As relates to the main theme of matter, the large structure outside made a connection between motion, the elements and matter.

LEME has the great ability to program shows in the most suitable and oftentimes unconventional places. This year the number of cultural venues  has increased. The festival takes place in the central venues of daily life of Ìlhavo, the same used by theater companies and musical groups throughout the year. LEME takes care to involve adults and children, to mix the public, and to attract new people, especially in the impressive central Casa de la Cultura, a central meeting point for shows, meetings and workshops for circus artists arriving for the festival from other cities.

There are currently five circus schools present in the nation and LEME contributes to their flourishing by including them in activities to create a new space for them too, firmly connected to Europe where the circus  at ease in a large community.

With its international connections, LEME is increasingly at the center of international and European networks, while its identity in Portugal on the territory is firmly rooted in shared planning with local institutions. “We endeavor for LEME to become a true meeting, a place for the inquisitive, students and professionals, thus branding a new cultural a beacon for Ílhavo. LEME is becoming a proximity festival, a means to connect the various audiences to the performing arts and, simultaneously, a meeting, a place for the professional community,” explained Luís Sousa Ferreira, director of 23 Milhas, the project of transformation and cultural development of the city of Ìlhavo. Project Manager, Editor -Italy
Valentina Barone is a freelance project manager based in Turin, Italy. After completing a degree in artistic techniques for the performing arts in Venice, she has been working as a press office assistant and coordinator for many music and cultural venues, festivals, and events in Italy. She is the international promoter of Kolektiv Lapso Cirk, La Belle Journèe, Piergiorgio Milano, and head of content for the Italian Juggling Magazine.
Valentina's profile
You are about to enter a members-only zone.
To share this article on your CircusTalk member page and connect with circus professionals from all over the world, sign up now. It's free!
Sign Up
Already have an account?
Log in

Valentina Barone is a freelance project manager based in Turin, Italy. After completing a degree in artistic techniques for the performing arts in Venice, she has been working as a press office assistant and coordinator for many music and cultural venues, festivals, and events in Italy. She is the international promoter of Kolektiv Lapso Cirk, La Belle Journèe, Piergiorgio Milano, and head of content for the Italian Juggling Magazine.