Festival Circo Circolo: A Contemporary Circus Fairytale in The Woods 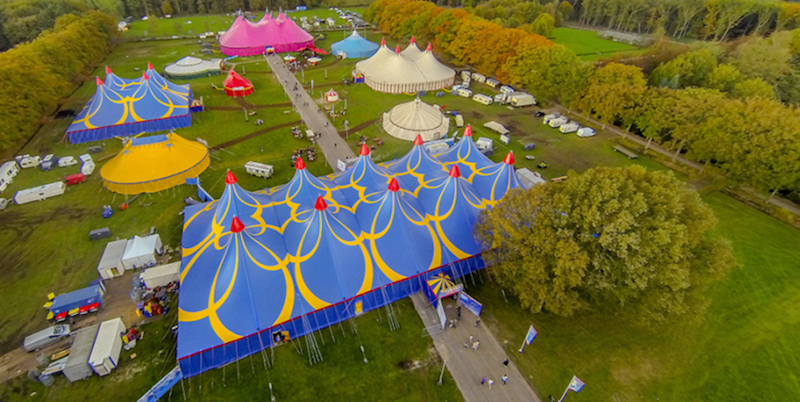 The fifth Circo Circolo festival took place in The Netherlands from October 16-26, 2014.

Every autumn in the even years, as the leaves begin to fall and the days grow shorter, the beautiful natural park Het Groene Woud (the green forest), gets a new breath of life with the Festival Circo Circolo. Taking place in Liempde, a small town in the Southern Dutch province of Brabant, it is the most rural and the largest contemporary circus festival in the Netherlands. It was founded by Wim Claessen, who was introduced to new circus when he saw Cirque du Soleil’s show Le Cirque Réinventé and thought their innovative approach to circus could help attract new audiences to cultural festivals. After seeing the French Cirque Plume in 1990, he programmed the company for the 1992 edition of theater festival Boulevard, which he was leading at the time.

Claessen continued to discover and program contemporary circus companies from abroad, because there weren’t many in the Netherlands. To gain recognition for and encourage the development of contemporary circus in his own country, he started working towards a festival specifically dedicated to this form. He also contributed to the foundation of ACaPA, the circus department of the Fontys School of Fine and Performing Arts in Tilburg, near Liempde, which started in 2007. The first edition of Circo Circolo was in the same year, and a collaboration with the school was started immediately.

To this day, different generations of circus students liven up the already very vibrant festival. One particularly magical and recurring contribution from ACaPA is Circuswoud (circus forest), an interesting combination of a guided tour through the woods and an outdoor circus performance, which introduces second-year students to site-specific work. This year, audience members could spot the Ieptakspringers (elm branch jumpers): strange creatures in warm hats and neon-colored leg warmers, who appeared out of nowhere to perform circus acts in and under the trees. A memorable moment from the 2012 edition featured partner acrobatics, in which bases made their fliers shoot out above the corn.

ACaPA students, as well as their counterparts from Codarts Circus Arts (the Netherlands’ other bachelor program in circus arts, founded in 2006 and located in Rotterdam) also got to perform in one of the nine beautiful tents that were pitched in a circle on the premises this year. Looking at their group performances, it was interesting to see the difference in styles. ACaPA’s Tabula Rasa was quite abstract and dark, albeit with some quirky funny moments, and included beautiful poetic duets in aerial straps, Chinese pole, and cloud swing. Codarts’ Circus Cabaret was a lighter, more colorful and chaotic show that included resourceful absurd moments with an apparently drunk and doped-up female contortionist and an act where the group tried to shoot down a fellow performer’s impossibly long handstand with a soccer ball.
Students and alumni also got to showcase their acts in the freely accessible performance part of the tastefully lit and decorated foyer tent, where everyone entered and gathered to buy tickets, eat, drink, talk, and so on. During the day, the small ring was often brimming with enthusiastic children who got to try their hand at juggling or walking a ball, guided by circus trainers from local youth circuses. The Netherlands have around 60 such programs nation wide, and Circo Circolo always supports this youngest generation of circus performers. This year, six Dutch and two Belgian youth circuses performed their latest shows.

Some of the young performers might end up like the founders of the Amsterdam-based company TENT, who can be counted among the pioneers in the Dutch contemporary circus field. They met through Circus Elleboog, the Netherlands’ largest youth circus. Nearly all of TENT’s performers are ACaPA or Codarts graduates. TENT’s second production NET is a tragicomic, spectacular and innovative show about the search for success that takes place on, under, and around a 5.5-meter-high net construction. The brand new B-Side company, made up of 10 enthusiastic recent ACaPA graduates with a wish to continue working as a collective, performed Tattica, tales from the B-Side, a moving and funny performance about co-existence: relying on each other and the audience to survive and be remembered.
The duo Circusdrome represented a completely different part of the Dutch circus spectrum with its short, funny, fairground-style show Bombardo. In a tiny traditional tent, two “brothers” performed a human cannonball act gone awry. Circo Circolo may focus on contemporary circus, but is still tinged with retro circus magic. Among the circus tents there was a beautiful classic Spiegeltent, an old red firetruck, combined with a fireplace, food stands, and a small cart where traditional Dutch poffertjes (small fluffy pancakes) were made. The grounds were beautifully lit at night, and the festival was opened by Liempde’s marching band, which celebrated its 140th anniversary.

Circo Circolo always gives a good impression of the international state of the art and its incredibly wide range. A total of 64 shows were performed over the course of 10 days, with big crowd-pleasers such as the young Canadian Flip Fabrique and the renowned Swedish Cirkus Cirkör, medium-sized shows such as the dramatic Morsures by the French company Rasposo, the moving and personal show Complicités by the Belgian Bande de Z’Oufs, partly made up of artists with a mental disability, and also smaller performances by the wacky French-Norwegian, Sweden-based duo Magmanus and the eccentric Spanish clown Léandre. The intense, intimate one-man show Marathon by the French Sebastién Wojdan was particularly memorable. The more experimental end of the spectrum was represented by the French duo Lonely Circus, who brought an intriguing balancing act between circus and music, and the Dutch Panama Pictures, led by choreographer Pia Meuthen, who cast five male dancers and circus artists, plus one female soprano, to investigate alpha male behavior in the banking sector.

Circo Circolo also runs special programs for professionals in the circus field, with seminars on topics such as rules and regulations for touring circuses, circus and dramaturgy, and the relationship between circus and the audience. The 2012 edition featured a seminar on social circus, which the festival participates in through a program in neighborhoods in Tilburg.

The festival, which celebrated its fifth edition in 2014, has become a major player in the Dutch and international contemporary circus field, as Wim Claessen always envisioned. Interestingly, this large festival is organized by a small team of freelancers. Claessen passed the baton to programmer Wendy Moonen, who is now artistic director. Marc Eysink Smeets takes care of the business side, always looking for new ways to guarantee the survival of the festival—a considerable challenge in the Netherlands, where the cultural sector has been hit particularly hard by the economic crisis. Thankfully, the festival can rely on the help of 200 dedicated volunteers, who sell tickets, support artists, guide and transport audiences, and most of all provide a sense of warm hospitality.

Fortunately, the audience continues to be drawn to Circo Circolo. The festival had around 22,000 visitors this year, about the same number as in 2012, despite the extremely varied weather conditions that are characteristic of Dutch autumns. There were warm sunny days where kids could do cartwheels in t-shirts on the fields outside but also downpours that made the grounds so muddy that those who dared to veer off the wood-chipped paths risked losing a shoe. There was even an actual storm, which the tents fortunately withstood. Let’s hope Circo Circolo can continue to hold its own as well, in these turbulent times. Writer, Editor, Researcher -Netherlands
Tessa Overbeek studied at the University of Groningen, where she focused her research on the development of various art forms in a broader cultural context. She came into contact with contemporary circus via Inside Out by the Swedish circus company Cirkus Cirkör. Her interview with Tilde Björfors, founder of Cirkör, was published in Community Art: The Politics of Trespassing (Valiz), and her essay on circus and the changing education in Sweden appeared in Teaching Art in the Neoliberal Realm. She is also an author and editor at Circuspunt, a website dedicated entirely to contemporary circus. In recent years she has begun training in various circus disciplines.
You are about to enter a members-only zone.
To share this article on your CircusTalk member page and connect with circus professionals from all over the world, sign up now. It's free!
Sign Up
Already have an account?
Log in

Tessa Overbeek studied at the University of Groningen, where she focused her research on the development of various art forms in a broader cultural context. She came into contact with contemporary circus via Inside Out by the Swedish circus company Cirkus Cirkör. Her interview with Tilde Björfors, founder of Cirkör, was published in Community Art: The Politics of Trespassing (Valiz), and her essay on circus and the changing education in Sweden appeared in Teaching Art in the Neoliberal Realm. She is also an author and editor at Circuspunt, a website dedicated entirely to contemporary circus. In recent years she has begun training in various circus disciplines.