First Social Circus Festival in the USA–Hosted by CircEsteem 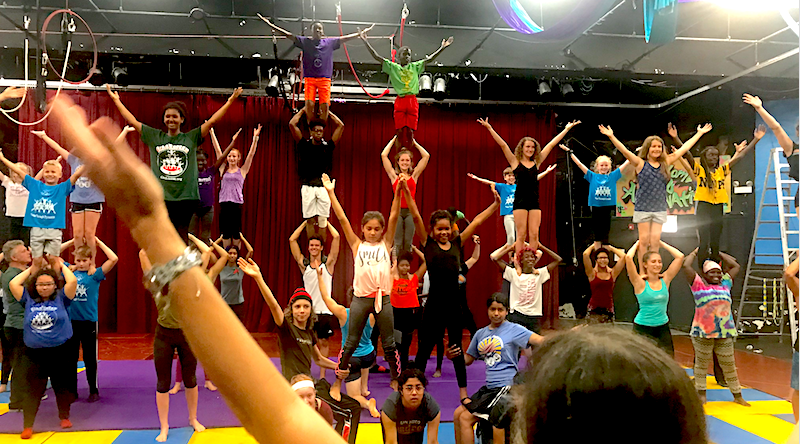 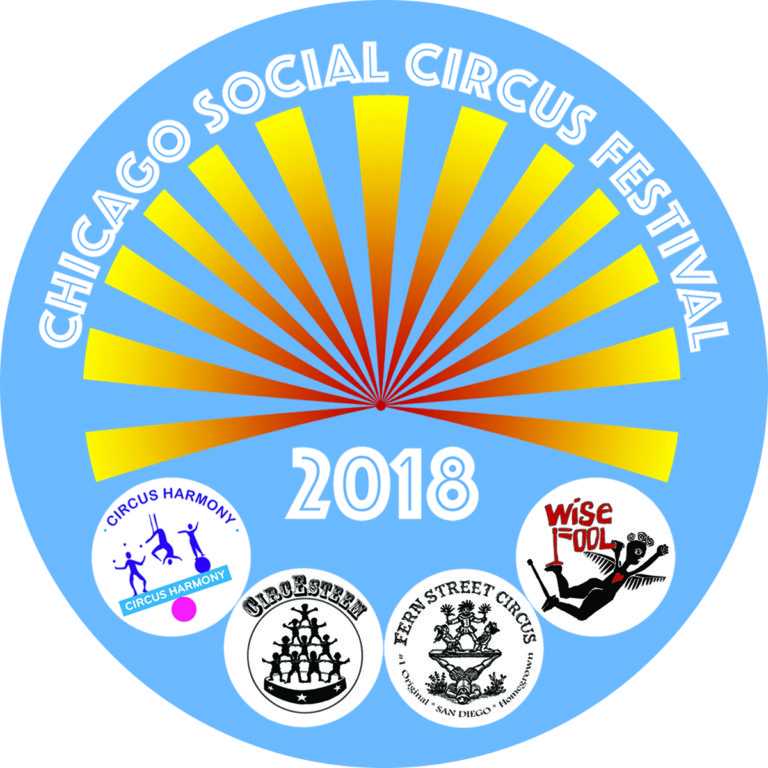 The first ever United States hosted social circus festival took place early this August at CircEsteem. Since 2001 their mission has been to “help youth build self-esteem and create safe and diverse communities through the learning of circus arts.” This year they took it up a notch by hosting two major events back-to-back over the summer, both the Chicago Social Circus Festival and an International Social Circus Exchange with Red Nose Foundation (where they hosted circus youth form Indonesia after having their teen troupe visit Indonesia there last year).

Festival organizer Dan Roberts says the festival was all for the benefit of the youth and focused on their activities, which ranged from beach visits, to street performances and from show development to workshops. “It started with each group performing for each other, then progressed to kids teaching kids, then kids creating acts with kids, and will culminate in kids performing with kids.” He went on to explain how when the groups first arrived, they got acquainted by performing their troupe show for each other.  Roberts says he hopes to grow the festival and make it a biennial occurrence so it doesn’t distract from the biennial AYCO conference, which is a big draw for social circus groups as well.

Becky Kern-Ryan, a Circus Harmony mom (to Ethan 14) said this part was really key in each group appreciating the other for their achievements. “When they were presenting their own circus it was really cool how the enthusiasm in the group was and how they were noting new techniques in circus,” she explained.

The four troupes performed a street show at Maxewell Street flea market on Sunday (as part of DCASE) and managed another street show at Argyll Street before performing their collaborative performance twice, once for the north side of Chicago and once for the south side. 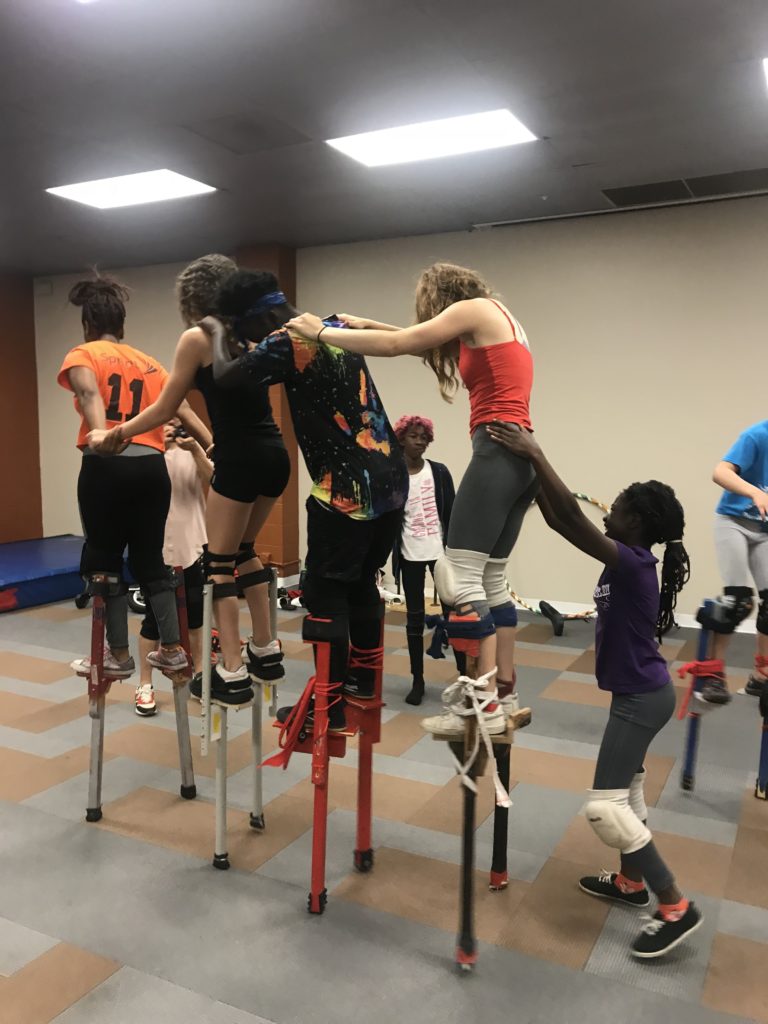 Circus Harmony founder Jessica Hentoff gave us the run-down on some of the favorite moments, “The most amazing things I witnessed here are when the students are working with each other. One of our students taught another boy from another program how to do hand-to-hand and it was life changing for that young man.”

She also pointed out how circus students gain perspective as well as skills, “While I know my students are going to gain new skills from programs that do things that we absolutely don’t do, what’s interesting is that they also are gaining an appreciation for our program and how we do things.”

Leah Bailey, mom of two young circus performers in Circus Harmony’s program (Philip 7 & Dennis 11) described how the festival effected her children “The main thing for them has been learning from other kids. They are pretty accustomed the the St. Louis group. My youngest gets a ‘sibling feel’ and shuts down to taking direction from others so coming to this festival means they get to learn things they never learned before from new people. They’ve never put on stilts or did the German Wheel. They get to learn all these new things from new people who are excited about sharing their specialty.” 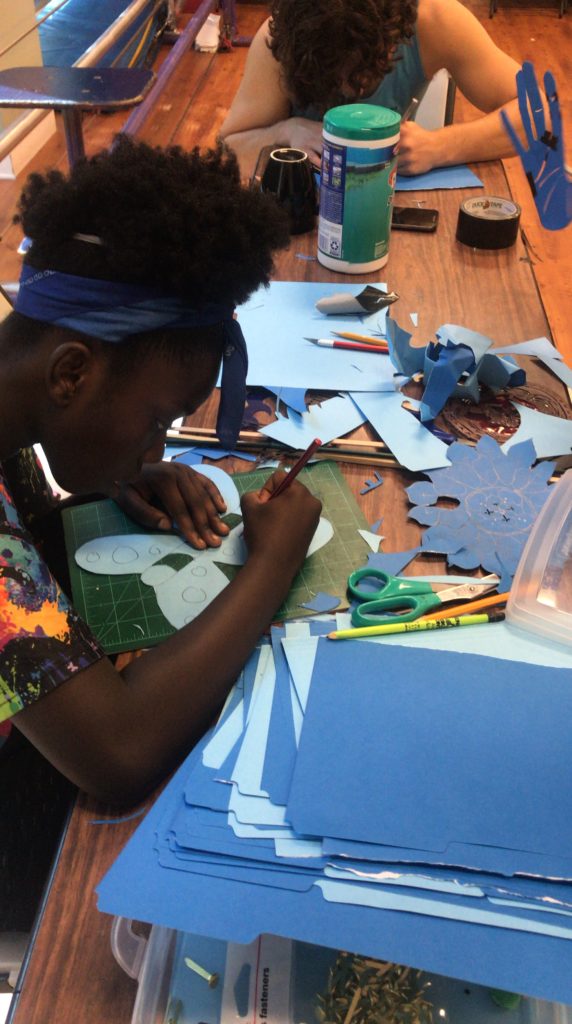 Kern-Ryan agreed, “Its been very interesting to see the different cultures of the circuses. They all do things a little bit differently. And watching the friendships form is fascinating. Its been a combination of both skill development and social connections.”

Bailey explained how at their circus classes at home, they were often focused on one or two disciplines and and how the option to work as a new team here paradoxically gave them each a little more autonomy and a chance to explore new directions,“Kids self-selected their activities based on interest and you see them up there aligning to each other and talking each other through it and giving each other encouragement. There were some juggling jams where they just started doing stuff. They had a little more freedom to try different things at their own pace. That was probably one of my favorite parts.”

Each social circus group really does do things differently, as they come from different regions of the country and serve different populations. Wise Fool New Mexico for example, has a history steeped in working with puppets as a way to increase civic engagement—often participating in parades and local events. So they taught a puppetry workshop as well as a stilts workshop. CircEsteem has a history of working with students newly immigrated from Africa, and has recently started working with gang populations, so their focus is often intensely based on creating a family environment and a safe space for youth to achieve excellence academically while also building circus skills. Although these differences may seem significant to the coaches and parents involved in the event, one look at the children involved showed the true benefits of social circus for all— a group of kids of all ages, backgrounds and races working seamlessly together to help each other improve their skills and put on a group show in the most organic of ways, child-led, but with a little help from their coaches.