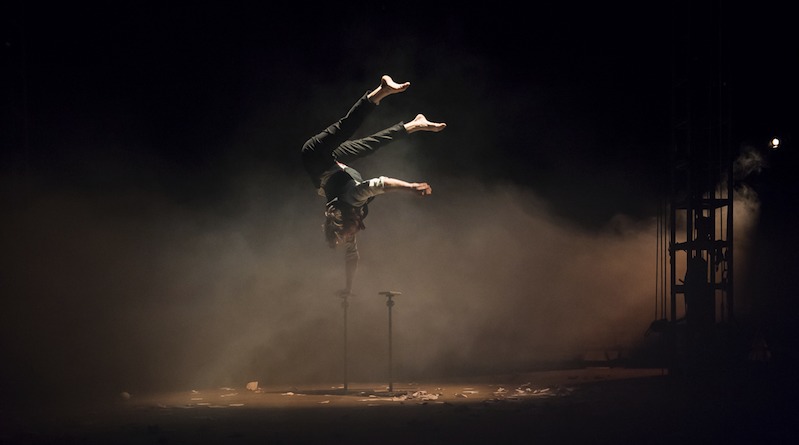 The Biennale Internationale des Arts du Cirque (BIAC)is a month-long celebration of circus that takes place in Marseille and the Provence Alpes Côte d’Azur region in the South of France every two years. This year is only the third edition but already the Biennale has become one of the most unmissable events in the circus calendar for professionals and circus fans alike. The wealth of shows on offer is like an encyclopaedia of what’s happening now in the world of contemporary circus. With so much to see it’s hard to decide which shows to choose, and even harder to resist staying for the whole month to make the most of everything that’s on offer! Over the course of three days I was lucky enough to attend four shows, each one representing an aesthetic and an approach to contemporary circus completely different from the next…

Where does one person end, and the next person begin? How do we find our place in the environment we live in? What happens when we work together or when we strain against each other? These are some of the questions that spring to mind when confronted by the lyrical and poetic work of Fanny Soriano in her latest creation  Fractales performed by Cie Libertivore.

The set is simple, and the show opens with a single ray of light illuminating a column of falling sand, casting a shadow over the five cast members we see in silhouette standing on a crescent moon. The five artists are in constant motion, rolling like fish or like the waves themselves, so fluid and unified that they could be parts of the same body. It would be hard to describe the discipline that unravels before your eyes as there is no sign of the strain usually associated with acrobatic moves; they are hidden in the fluidity of the dance and the animalistic transformation of the human performers before you.

Simplicity is key with the staging, elegant geometric shapes are layered over each other and combined with elements of the natural world; sand, earth, trees. The set becomes the equipment for the aerial acts but the contact between the artists is never lost; as one performer climbs, the tension she needs to reach the top is provided by the rest of the cast sitting and standing on the other end of her fabric apparatus.

This is the first time I have seen Soriano’s work and I found it to be stimulating, visually rich and yet simple in it’s staging and message. I will eagerly look out for more of her work in the future!

Immediately we are in a different world from the classic theatre setting of  Fractales. Walking into Cirque Aïtal’s round, soil-floored circus tent we could easily imagine ourselves in a 19th century traditional circus venue. Suddenly a hand shoots out of the dirt in the centre of the stage and a crying clown slowly emerges. She stumbles around the stage and falls into the curtain that reveals the ‘back stage’ area where the other artists are getting ready and chaos descends!

The references to traditional circus are unmissable: the clown who appears to warm up the audience, the costumes which speak to the passing of time throughout the show, the acts that make reference to the different trends in circus disciplines throughout the ages. Indeed, this homage to the circus of the past is exactly what Cirque Aïtal are trying to achieve. The very name of the show “The season of circus”  tells us that we are going to be taken on a journey throughout the history of the circus world, and it is well done. What is really charming is that not only do we appreciate the changing trends of costume and disciplines, but we are also invited to glimpse upon the more intimate moments of being part of a circus troupe. We get sneak peaks into the life of the circus performer thanks to the clever staging which opens up the ‘backstage’ area and lets us see the artists getting ready, analysing their performances or simply passing the time between shows.

The acts are technically very strong, and the age-old techniques for getting laughs from the crowd are used in abundance (silly dancing, big fighting little, a man dressed as a bear…).Saison de Cirque focuses less on artistic exploration and more on telling a story and paying respects to the circus artists that have gone before. It doesn’t break any boundaries in contemporary circus performance and expression, but it is cleverly done and remains a crowd-pleasing, fun time spent at the circus.

The first thing we see on entering the tent is a huge structure shielded by a white drape: the stage for this show. One artist appears out of the audience while a silhouette of a figure appears on the drape and they move together in a mirror image of one another, one in real flesh and blood, the other just a shadow. It quickly becomes apparent though that many of the visual effects in the show are designed to be seen from straight on and if you sit towards the side of the stage the magic of the moment is lost. The show would be better suited to a theatre than a circus tent.

OpenCage experiments a lot with staging. It incorporates different visual elements that the artists can play on and thereby turn into apparatus, such as the great white sheet that acts as a stage curtain at the start of the show and becomes a giant flat silk that can be climbed and performed on. There is an ingenuity in the ideas at play in Open Cage, the stage that moves to provide different performance spaces and angles, the ropes that one minute are used as normal circus ropes and the next come to life and interact autonomously with the movement of the artists. However, as a whole the show feels disconnected, and lacks narrative. The opening setting feels like a mental hospital, but we are never really sure if this is the case or not, and it is hard to tell what story the different ‘scenes’ are trying to tell us. The two artists on stage work well together but it is difficult to discern what their relationship is.

Overall it feels like Compagnie Hors Surface focused more on the design and construction of their admittedly impressive set and spent less time exploring the meaning that they wanted to convey. However, there are some very interesting elements to the show, the influences from new magic with the autonomous ropes, the moving stage and use of lighting which creates some lovely moments of silhouette and interaction with an unseen partner. Compagnie Hors Surface is one to watch in the future.

This was the show I was most excited to see. One of the first contemporary circus shows I ever saw was by NoFit State Circus and it made me fall in love with the art form and the company. Needless to say, I had big expectations for this their latest offering.

The NoFit State trademarks are all still present inLexicon: the ingenious open staging techniques where they don’t seek to hide any of the rigging or transitions but rather make them part of the show thereby making them less distracting to the public, the live music with musicians who at times join the cast on stage and who are integral to every performance, the interaction with the audience that breaks the boundaries of public and performer and instead lets us all be a part of one unique experience.

The energy of the performers is intoxicating; they never seem to stop moving. After each act the whole cast pours back on stage, shouting, laughing and running around – the very embodiment of the subtitle of the show “The art of misbehaving”. They distract the audience from whatever equipment changeover is happening whilst sweeping them up in a wave of infectious energy. The inventiveness of the staging is just as impressive as always, from the old-fashioned school desks that are hoisted into the air to create a giant floating classroom, to the human mobile made from girls and boys suspended above us in an impressive moving aerial structure.

Compared to the previous shows I have seen by NoFit State though,Lexicon feels like a lot of distraction and filler to make the show last two hours. Many of the individual routines feel underdeveloped, with the exception of the Sam Goodburn who stuns the audience with his ever-more-daring unicycling feats, and Rosa-Marie Schmid who performs a double rope act with the artistic sensitivity, technical prowess and visual richness that we have come to expect in a NoFit State show. The addition of projection in some scenes feels unnecessary and I find myself longing for the simple yet visually powerful staging from previous productions, without the fuss of all the new technologies which don’t add anything to the acts.

Undoubtedly, my critical appreciation for circus has changed from when I saw my first NoFit State show as a teenager to now after working in the industry for a number of years. It is therefore hard for me to judge if some of their magic has been lost inLexicon or if I am just being overly-critical because I had such high expectations from NoFit State being that they are one of, if not my favourite contemporary circus company. Despite my personal disappointment of feeling that some of the simple brilliance from their previous shows has been lost, I can’t deny the reaction of the audience around me who were blown away by the energy and inventiveness of the show.

The Biennale is a rich celebration of contemporary circus. Not only are there a wealth of shows on offer from some of today’s most influential contemporary circus companies, there are also exhibitions, talks and workshops which really allow the public to gain an appreciation for the entirety of this art form. A series of ‘professional days’ are also organised for circus professionals to help them exchange ideas and share their challenges and solutions. I will go into more detail about the professional side of the Biennale in another article to be published soon!

As a native of Edinburgh, Scotland, Kirsty Bell grew up surrounded by culture, but she really discovered the world of circus when a friend invited her to an aerial silks class… from that moment on she was hooked! Kirsty has witnessed first-hand almost every aspect of circus, having experience as a performer, costume designer, critic and administrator. In recent years Kirsty has taken part in the Circus Voices scheme at the Edinburgh Festival, writing for the Circus Dairies, and has been in charge of the development of the Club PRO and Demain’s Volunteers projects at the Festival Mondial du Cirque de Demain in Paris.