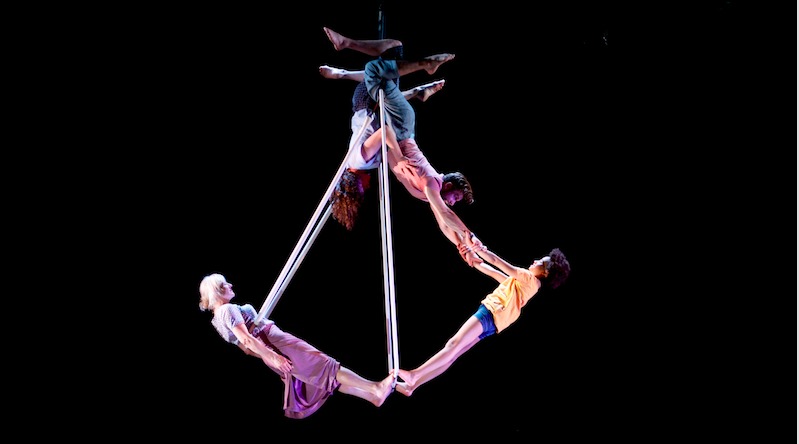 On an aerial device that is a giant rectangle, four people slowly explore their boundaries in the air. They depend on each other to stay aloft and to get around, so this exploration is slow, deliberate, careful and full of care for the others. Their tenderness and respect for one another is always evident, even when the closeness gets uncomfortable and the urge to break away is strong and they fidget and twist.

In a fascinating twist on circus narratives, this intimate slice of life story not only explores the youth of the adult performers in the show, they also explore circus with a youth, which affords ample opportunities to express the kind of support and care one can feel towards a young person as they are slowly emerging in the world, and by adding aerial to that, it becomes quite dramatic and symbolic. Equally ground breaking is their work with Lee Carter, a 60-year-old aerialist who demonstrates that the body of an older adult has just as much to offer to the art form.

Seeing both a child and an older adult on stage is liberating for the viewer—as if Ockham’s Razor has cracked the code of exclusionary and elitist circus, harkening back to a time when inter-generational circus was the norm, and in doing so has opened up the world to a whole new possibility of expression of experiences in contemporary circus that is not physically possible to a group of 20-year-olds.

The design elements of the show are all on point and help accentuate the simplicity it aims to convey. Costumes resemble street clothes but don’t distract. There’s a sometimes lively, sometimes sedate musical score and some sleek scenography (everything has the alluring simple design aesthetic of Apple, all shine, soft curves and refections).

Being an aerial company, they already had their work cut out for them to convey story and relationships from up in the air, but in this thoughtful piece, they pepper their stunning aerial work with strong ground numbers and honest personal anecdotes about their lives; for example, about caring for a beloved grandparent who always supported you but who has dementia now, about finding the patience—or not—to deal with a willfull toddler, or about surviving the heart-breaking loss of a child. Moving stuff that highlights the difficult aspects of being human with other humans and yet juxtaposed with their stirring aerial pieces it makes for a heartening show about the power of family.

Those powerful embraces between grandchild and grandparent. A moment of exhaustion shared between parents. A dad and mom trying to keep their teen close while the teen tries to get a little wiggle room. These are some family experiences most can identify with, and also consist of a level of self-examination and reflection that requires a few years of hard won experience to pull off, which the performers have in droves.

In their program, they describe the mission of Ockham’s Razor, “Rather than paint the circus performer as a superhuman character capable of impressive feats, we work with what draws on the human and the real, where the characters go through recognizable human experiences, emotions and conflicts which the audiences can identify with and relate to.” Striking the right balance between relatable and impressive is a difficult one, and the pacing of this show made it a bit more challenging, but the overarching themes and the connections between the performers is so powerful that the simple fact of vulnerable humans sharing intimacy becomes the focal point that inspires.