From the Community to the University, and Back Again: Circus Research in Brazil 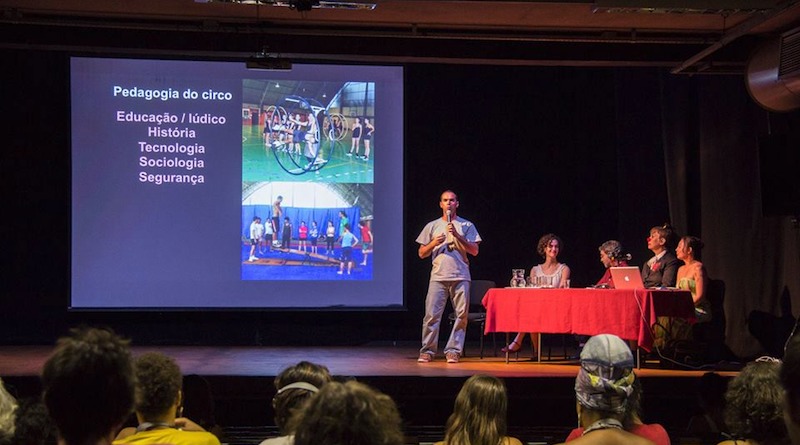 In this new series titled Adventures in Circus Research curated by academic, author, and educator Alisan Funk, we will explore the depth and breadth of circus academic research around the world. By featuring circus researchers, we give them the space to explain the nature and significance of their research directly to the circus community, and to highlight the practical impact of their research on the circus world.

This first article in the Adventures in Circus Research Series comes from Marco Antonio Coelho Bortoleto,  professor of the Physical Education Faculty at the University in Campinas (UNICAMP), Brazil. After finishing his sports career in Artistic Gymnastics, Bortoleto was invited to coach circus artists in acrobatics in 1995. Many of these artists were part of the cohort at the newly created São Paulo circus school. He found his circus students to be passionate about their work, and also full of questions and curiosity about circus arts. As a practitioner, researcher, trainer, and educator, Bortoleto saw an opportunity to bring his embodied gymnastics knowledge and his intellectual training in sports science, anthropology and sociology all together to research circus. Bortoleto continued coaching circus, including a stint in Europe where he also performed, and continued to deepen his understanding of circus training in many different contexts. He has maintained deep connections with Brazilian circuses and circus history, which continues to motivate his research interests.

For Bortoleto, the university is a location where knowledge can be shared and ideas can develop. Seeing the physical, emotional, and collaborative value of circus within the context of both physical education instruction and as means of social outreach and community building, Bortoleto has worked within his university to include circus directly within the content and pedagogy. Among these activities, he has been the supervisor for many master’s theses and doctoral dissertations investigating circus arts, instigated cross-departmental collaborations to develop circus equipment for different purposes and populations, hosted conferences investigating the creative and pedagogical potential of circus, and published multiple books and papers elaborating circus pedagogy. Here, Bortoleto shares what motivates him as a circus researcher and educator, and shares his thoughts about important fields in circus research.

‘The History of Brazilian Circus’ merits being written in capital letters. Since the mid-nineteenth century our country has been “occupied” by numerous circuses, bringing with them  international diversity and producing a unique way of doing circus. At the beginning of the twentieth century, the Brazilian circus achieved enormous social recognition, with a strong presence from the smallest villages to the large urban cities (1), and great popularity in all social classes. From the late 1970s, in the same way as in Europe, Canada and Australia among other places, dozens of circus schools (hundreds nowadays) have popped up from the north to the south of Brazil. A particular symbiosis between traditional circus families, circus schools, and new circuses build a sui generis mode for the Brazilian circus at the 21st century.

I Began Researching Circus Because…?

Living with, and being mobilized by, all these transformations– in 2006 we created a Circus Research Group (CIRCUS) at the University of Campinas (UNICAMP), bringing together historians, educators, PE teachers, psychologists and circus artists (2). Over the years, we have focused our research projects on the development of pedagogical tools (better ways to teach circus to different groups of people, and in different contexts), discovering the historical perspectives of circus in Brazil, and the development of new technologies (training equipment, performance equipment, new materials, etc.) We have also combined these different research interests in many ways. In search of more creative practices in education, we have been investigating circus instruction in different contexts, including schools (from kindergarten to high school), social projects, professional circus schools, and the higher education system (3).

At UNICAMP, in 2007, we established a curricular subject for the undergraduate course in PE, which annually receives students from the School of Medicine, Institute of Arts, Faculty of Education, Faculty of Physical Education, among others. Our students and educators participate in circus instruction in our local community, improving circus instructor’s education in the field and also increasing  the number of circus practitioners around our university. In fact, the activities developed by CIRCUS activity have had a substantial impact on the Physical Education Postgraduate Program. This is an excellent example of an inter-transdisciplinary approach concerning body practices, combining art, education and technology. The graduate research, theses, and publications also significantly contribute to our body of knowledge about circus practices in Brazil.

Our research approach is always based in a collective work, and we pursue all of our research activities through collaborations (4). We are part of a network of partnerships with dozens of small businesses and circus companies. These collaborations and partnerships made it clear to us that the university should also be more accessible to circus practitioners (riggers, managers, artistic directors, instructors, artists, and researchers). We have been working to create programs that are permeable to circus practitioners, and which also enable practitioners to pursue university research and remain in their practice. It seems to me that the presence of circuses in the universities is still smaller than it could be, and perhaps should be. We are still very timid!

Examples of Our Collaborations

Since 2007 CIRCUS-Unicamp has had a relationship with the Escola Nacional de Circo (Rio de Janeiro). This partnership became more and more important after an official agreement  between our schools signed in 2014. Three projects have been under development since then: design of safety protocols; anthropometric monitoring of students; and updating the new students selection process.

For the last 10 years we have also collaborated with the “Circo do Mundo Brazil Network” (5), which includes dozens of social circus projects, and has been an excellent opportunity to discuss and develop solid pedagogical tools (6).

We have also recently developed a partnership with the research department at Montreal’s National Circus School, the CRITAC (7). This partnership enables us to share knowledge by breaking through language barriers, develop new research projects, and to enlarge the international collaborations.

Through these programs and these collaborations, Unicamp has become a significant hub of circus knowledge and research for anyone who speaks Portuguese!

Beyond the context of CIRCUS (Unicamp), we observe that dozens of Brazilian researchers have contributed to an exponential increase in the national academic production (8). However, more time and a lot of dedication is needed to consolidate the reputation of the circus in Brazilian universities (9).

Finally, we are immersed in an “adventure” that has expanded the scientific research field, pushing society – and more directly the universities – to ensure more space and better conditions to develop circus research and education. Academic, Educator, Historian -Brazil
Marco Antonio Coelho Bortoleto, has a B.A. in Physical Education from the Methodist University of Piracicaba and MSc in Sport Science from the University of Campinas, both in Brazil. He received his PhD at the University of Lleida (Spain). He was a Postdoctoral Fellow at the University of Lisbon (Portugal) and at the University of Manitoba (Canada). As Visiting Professor he worked at Universidad A Coruña (Spain) and La Plata National University (Argentina). He is currently working as an Associate Professor in the Physical Education Faculty at the University of Campinas (UNICAMP - Brazil). Since 2006, he has led the CIRCUS RESEARCH LAB (CIRCUS) together with the circus historian Erminia Silva, PhD. He is a former professional circus artist and acrobatics teacher at Barcelona’ Circus School “Rogelio Rivel” (Spain, 2001-2005), and has been collaborating as a partner of Cirque du Soleil casting department since 2003.
You are about to enter a members-only zone.
To share this article on your CircusTalk member page and connect with circus professionals from all over the world, sign up now. It's free!
Sign Up
Already have an account?
Log in