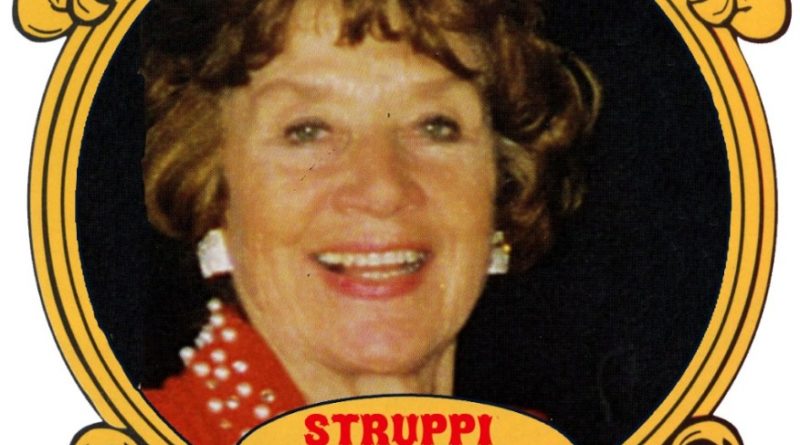 America says good-bye to a beloved performer and circus owner.

Gertrude “Struppi” Hanneford died on November 1, 2014. She was the owner and producer of the Royal Hanneford Circus, which operates two full-time performing units that tour arenas, one touring tent show, and two permanent shows in theme parks in America.

Although Struppi was not born into a circus family, she was drawn to acrobatics from an early age and began training on trapeze at age seven in her native Germany. She also studied ballet, diving, and gymnastics before launching her career with a duo act while still in her teens. In 1953, she moved to the United States to work with Mills Brothers Circus, in which she performed on double trapeze and web and presented a trained dog act.

The following year, she met Tommy Hanneford, a comic horse rider from a family that has been performing in circuses in England and America since the 1700s. She left her duo act to join her new husband and developed an Indian maiden-themed solo trapeze act. In addition to performing in circuses, she performed her solo act on the Ed Sullivan Show and at Radio City Music Hall in New York City. She also performed on high wire and had a dog act, and she was the first woman to present tigers, one of the many accomplishments for which Struupi was honored by the Ringling Circus Museum in 1975.

In 1965, Tommy and Struppi founded the Royal Hanneford Circus. For the first decade, business was mixed, but by the mid 1970s, the show became successful, partly through a strong partnership with the Shriners organization, and expanded to produce multiple units, both touring and in permanent locations. After 53 years of marriage, Tommy died in 2005, leaving Struppi the sole owner of the business.

Struppi Hanneford is remembered not only for her talent in the ring but for her fairness to her employees and her kindness to the many who considered her a mentor or surrogate mother.