Hanging by a Thread–Calculated Risks in Circus 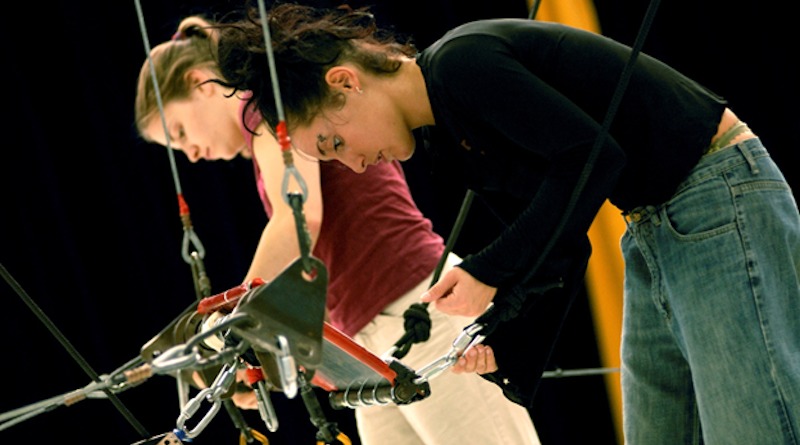 Recently, an acrobat fell 25ft to the floor at the 2nd International Air Athletics Championship in Riga, Latvia[1]. In 2018, a Cirque du Soleil acrobat died after a fall during a performance[2]. In 2014, A ‘human chandelier’ fell during an aerial hair-hanging stunt at Ringling Bros. and Barnum & Bailey Circus which sent eight acrobats plummeting to the ground[3]. These are just three examples of the long history of circus accidents. Risk is part of circus performance. The existence of danger enthralls the public when the artists fly but makes them cringe when they fall. But risk can lead to injuries and in extremely rare cases, death. The risk might come from an acrobat’s error, but the performer’s life also depends on proper rigging.

Aerial acrobatics encompass all disciplines requiring the rigging of an apparatus at heights needed for disciplines like trapeze or aerial silks. They are considered to be the most dangerous disciplines for obvious reasons. The acrobatic rigger is the one who installs, inspects, tests and maintains the rigging equipment. Aerial rigging is essential. It ensures the safety of both artists and audience members. The rigger chooses the equipment based on the estimated force that the circus acrobat will generate, called dynamic load, as opposed to their static load. The word ‘dynamic’ expresses the explosive energy of the circus acrobats’ performance movements. An acrobat’s static load is considered the load generated when motionless, as would occur when they hold a pose. During such poses the force in the hanging equipment will be equal to the acrobat’s weight. However, when the acrobat executes a dynamic movement, the force is no longer equal to the performer’s weight and can be quite difficult to evaluate.

Acrobatic riggers in North America currently use a safety factor of 10, meaning that the equipment should support 10 times the bodyweight of the acrobat[4]. In fact, there are no specific safety standards for circus performance. In the entertainment industry, a new safety standard, the ANSI EI.43 norm, was adopted in 2016 and covers performer flying system[5]. But the ANSI EI.43 norm does not include circus performance.**(amended statement below) Hiring a rigger is not even mandatory. A circus apparatus could be installed on any structure or manufactured and sold without knowing if the equipment can support the impacts generated by circus acrobats. Choosing the wrong equipment can lead to serious accidents. Advice for the circus industry: make sure the rigger is certified with Entertainment Technician Certification Program (ETCP) or CQP accrocheur-rigger (the French equivalent) and it’s best if he has experience with circus. As Delbert Hall mentioned in his article ‘Safety and Your Circus Business’[6], some organizations such as the American Circus Educators Association in the US or AERISC in Europe help studios prepare their safety policies and procedures.

Science can help the circus community in many ways. On the safety side, the force exerted at rigging points on circus equipment was measured for five aerial circus disciplines during a research project at the École Polytechnique de Montréal in 2017[7]. The maximal force of more than 300 movements were compared to each other. The study showed that circus acrobats can reach a force of 8 times their body weight for a movement in aerial straps presented in Figure 1. The movement is called ‘dislock’ because the acrobat can suffer shoulder dislocations if the shoulders are rotated too fast. This data will certainly help riggers, designers and engineers to safely install and design circus equipment7. Recently, more and more circus companies have called upon engineers to certify their structures. Circus companies may also make risk assessments to improve safety. A risk assessment is an overall review of an apparatus and its performance that identifies the specific hazards and risks involved. In some cases, the risk is too severe and a change in the show, the addition of new safety equipment, or the adoption of a new safety procedure is recommended.

Figure 1: Sequence of an acrobat performing a dislock movement on aerial straps. Reproduced with permission from The Circus Dictionary[8]

In addition, science can also help to better understand the workload of circus acrobats. According to a study from France in 1989, the workload that leads to traumatic injury is also the workload that makes the acrobats well adapted to training[9]. In other words, high performance in circus arts is inseparable from risk of injuries occurring. The schedule of training sessions and training intensity is also a science. Learning requires a carefully designed workload increase that can be optimised by more data.

Another issue that science can tackle is injuries. The performance of circus artists can be compared with those of high-level athletes. Circus acrobats perform their acts more than three hundred times (between 350 and 650 according to Goudard[10]). The difference is that it’s in front of an audience every day or even 2 or 3 times a day. Their risk is double: first, during the performance itself and second, in the accumulation of fatigue from daily efforts. The circus acrobat is most likely to suffer from acute trauma such as strained/pulled muscle and sprains/ligament injuries. The repetition of movement can lead to repetitive strain injury that can convert into tendonitis or stress fracture and very rarely, a fall can cause paralysis or death. There were no studies comparing the number of deaths in circus with any other sport or work yet. But it would not be a surprise that there is a similar number of people die in the circus as do in construction (in ratio). And yet, somehow, we almost never hear about the deaths of construction workers in the media. During the last ten years, I can personally remember three deaths of Cirque du Soleil artists[11],[12]. Compare this to the deaths of 16 construction workers who died over the course of 2017 in Quebec according to figures from the occupational health and safety committee in Quebec CNESST[13]. To be fair, the number of people in each field should be taken into account: there were 120 times more workers in construction than in Cirque du Soleil from the figures of the year of 2017 only[14],[15]. No rigorous scientific data exists on the number of deaths in circus. However, there have been studies performed regarding injury patterns and rates. Although the rate of injury in circus is lower than in gymnastics, 11.2 injuries per 1000 performances in circus vs 15.2 injuries per 1000 performance in women’s gymnastics[16],[17],[18], the risk of injury remains a major issue. Learning more about the specific characteristics of circus injuries can help improve care for this unique group of performers.

Figure 2: Injury rate in circus and in gymnastics

The Future of Calculated Risk

In the face of such dangers, will the future of circus performance be to ask artists to avoid risk? Is circus still circus without it? I think that the answer is that risk is circus, and circus is risk. Goudard, the first researcher to work on the risk in circus, provides the following definition: ‘’Art for circus artists is to solve the problem of the imbalance in which he had deliberately put himself by an artistic figure. This action will expose him to the risk.’’[19] But risk can take different forms and yield various benefits. Daring to try new experiments, which may fail, is part of the creative process. Innovation does not come by repeating the same routines and this constant drive for renewal is the basis of circus. Thankfully, circus companies are becoming increasingly aware of the dangers their artists are exposed to and actions are being taken to decrease unnecessary risk-taking – all while still ensuring a thrilling show! Science and art collaborate to create exciting circus performances with calculated risks so that circus remains fun for everyone.

**The author would like to amend the statement–“But the ANSI EI.43 norm does not include circus performance.”– and add the following statement. 5/18/20

“As currently written, these regulations leave room for interpretation as to whether or not the ANSI E1.43 norm does include circus performance with regard to the terms ‘Any connection that ultimately relies on the strength or ability of the Flying Performer’, because it is precisely the definition of a circus act. Some argue that the norm is intended to exclude the acrobatic apparatus (except if it is a harness) but it does not exclude the reminder of the rigging system. I’ll also cite Jim Shumway who wrote: ‘The good news is the E1.43-2016 does an excellent job of defining its scope and being clear with its expectations. While it does cover performer flying design, manufacture, use and inspection, it explicitly does not cover connections where the performer is responsible for keeping himself or herself attached to the system like most circus acts.’ in his book titled Automated Performer Flying.”

Marion Cossin is an engineer of research at the Center for Research, Innovation and Transfer in Circus Arts/SSHRC Industrial Research Chair in circus arts in Montréal. She also is a PhD student in biomedical engineering at the Université de Montréal and at École Polytechnique de Montréal and with the partnership of the national circus School. She has a master’s degree in mechanical engineering from École Polytechnique. Her works focus on the human-structure interaction between circus equipment and acrobats, improvement of safety practices, equipment design and performance improvement. Website: http://www.marioncossin.com/