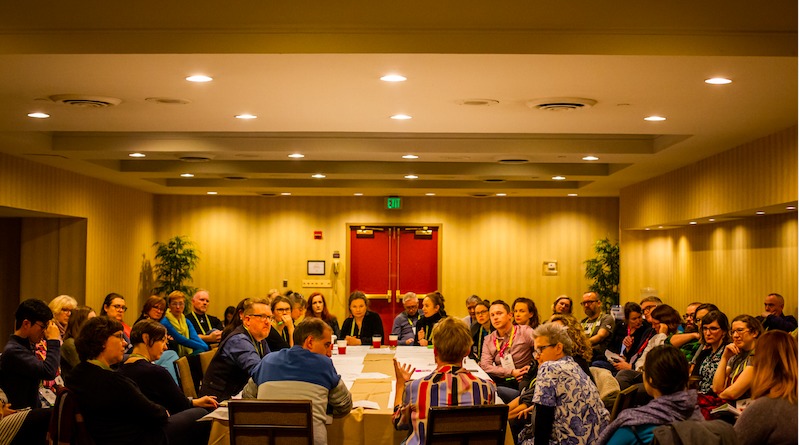 A profile on an overlooked role in creating touring work, inspired by a Long Table group discussion among touring professionals at IPAY (International Performing Arts for Youth) 2020.

This article was written after COVID had broken the species barrier, but before it had wreaked its deplorable havoc on the circus and performing arts world. In such a short time, our sector has been altered fundamentally. So much uncertainty lies ahead.

The TOHU team was heartbroken to cancel our summer festival last week. We will miss that essential, effervescent convergence which has been a key annual event in our field for over a decade. We are working on a digital platform for our Market; we hope those who are able are staying safe at home; and we thank the essential workers for their risks and sacrifices on our behalf.

Meanwhile, TOHU stands firm in solidarity with circus artists and colleagues around the world, and we are ready to play our part in the collective restoration and resurgence of contemporary circus; the performing arts; cross-cultural exchange; public assembly; and shared joy. As we all know (and as this article points out), circus’ capacity to make art, joy, and wonder accessible to all will be even more necessary on the other side of this pandemic. And as we imagine staying the course between now and then, there has never been a more opportune time for out-of-the-box thinking. Our shared future simply depends on it. We hope the article below highlights one still-pertinent approach to consider as we begin to surmount these new challenges.
– Ruth Wikler, TOHU/Montréal Complètement Cirque Festival 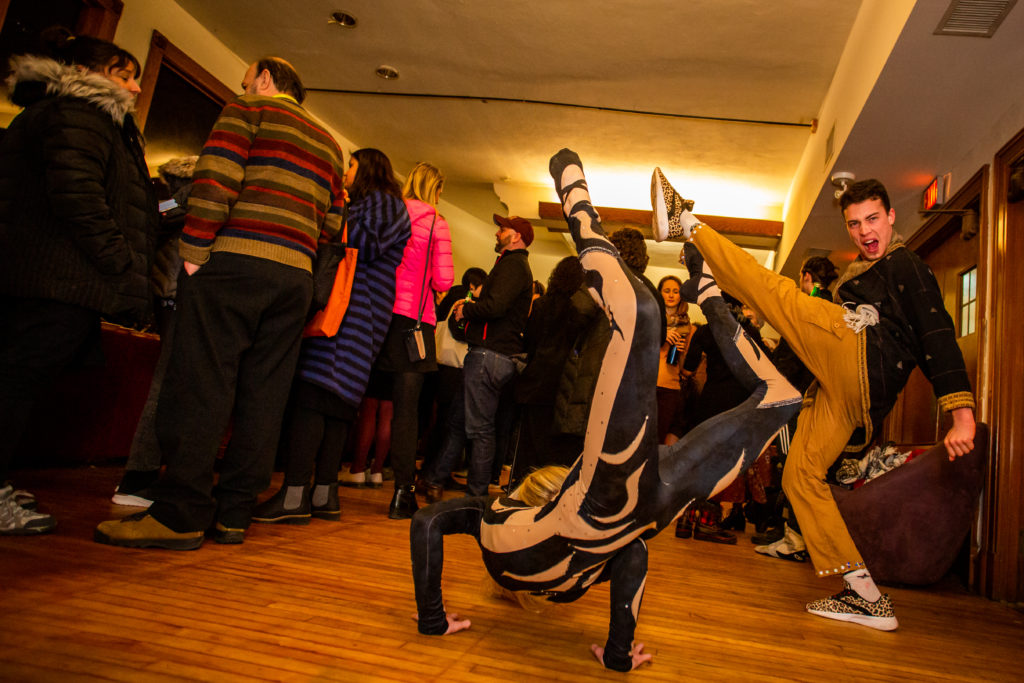 The International Performing Arts for Youth conference highlighted some of these challenges and opportunities in Philadelphia this January, with a special series of panels and workshops focusing on circus and dance for young audiences. This focus reflects a larger trend of circus being included in cultural markets’ professional development programs over the last few years, reflecting the interest within the field. IPAY hosted a number of panels and discussions, all of which were well- attended by a variety of conference-goers.

At one Long Table discussion on the subject, a vibrant conversation ensued around a critical role in the creation of new circus work: the creative producer. The Long Table attendees included creative producers themselves; presenters; artists; educators; and arts administrators, from both circus-specific and multidisciplinary backgrounds and organizations. Many of the people in the room brought valuable perspectives to what became a group discussion about this vital role: everyone agreed that indeed it was a critical–and largely invisible–role in creating tour-ready, high-quality circus work. 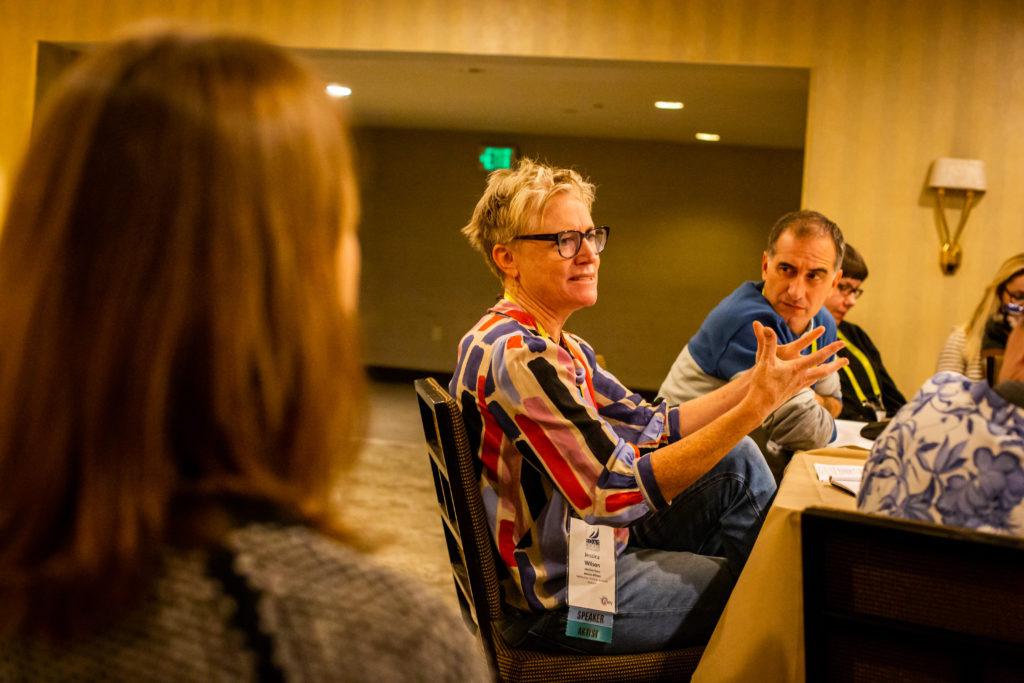 Before we get into the details of the thoughts on creative producers, let’s establish what domain we’re talking about: the touring performing arts market. This market is mainly composed of companies or troupes who make full-length works and tour them to performing arts venues and festivals, most of which are non-profit; they may or may not be represented by an agent.

When we talk about the role of the creative producer, we are talking about a very specific slice of the circus pie—companies touring work to theaters and festivals domestically and internationally. It’s here that creative producers have demonstrated how they can supercharge a creation and development process, accompanying companies from conception through to successful touring.

The creative producer is a key figure in the successful development and market launch of devised work in a variety of performance forms, not just circus. It’s a role that requires strategy, comfort in both commercial and art worlds, and a huge and diverse network of professional contacts.

Because of the invisibility of this role, it’s sometimes hard to track its importance. At the Long Table, the assembled industry professionals pooled concepts towards a group definition of this role.

Points from the discussion: 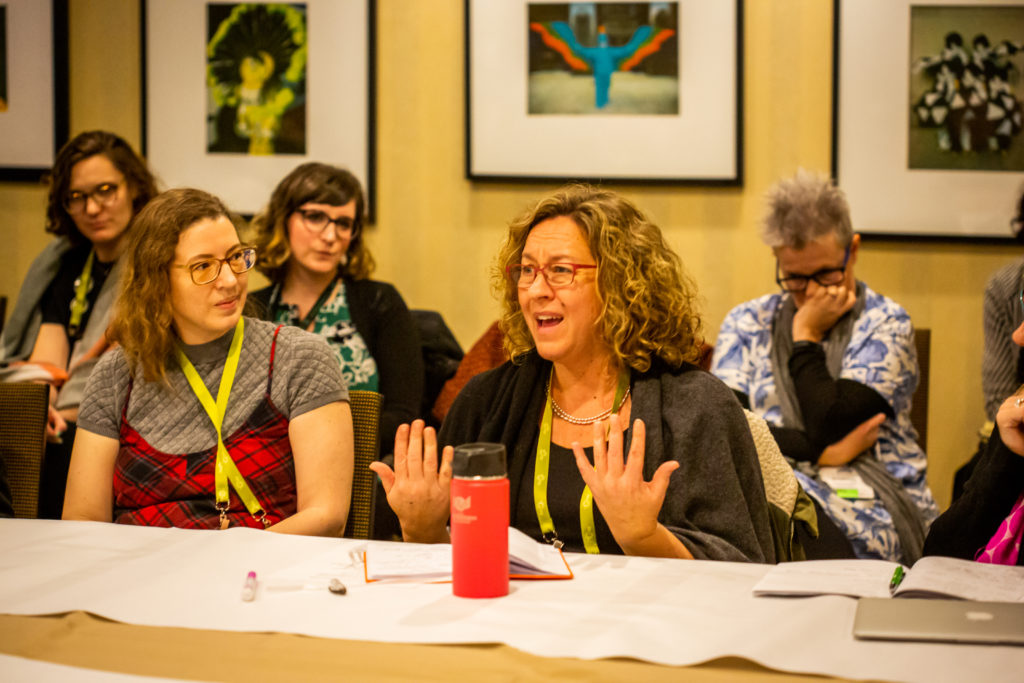 As the touring performing arts industry moves to include more devised performance work, whether circus or not, the role of the creative producer seems critical: they connect artists, find directors, find residencies, define an audience for the work, develop the marketing material, sometimes gather investors/fundraise or invest themselves. A creative producer might be a company employee. But more likely, he or she is an entrepreneur (investing their own money in the company) or even runs a small nonprofit. Maybe he or she works like an agent or manager, getting paid on commissions of bookings. Often he or she handles multiple projects at once, involving a wide range of artists and companies, even across multiple disciplines.

One of the reasons we may not see this role being filled more often or more openly is the amount of risk involved—bringing the question to mind: if this is such a key figure in the artistic development process, how can the field support their work more robustly?

Who are some successful creative producers in circus today? Gravity and Other Myths (AUS) has benefited from the work of Craig Harrison (who participated in this Long Table). Barely Methodical Troupe (UK) has benefited from the work of Di Robson. Briefs Factory and Hot Brown Honey have been boosted by the work of Linda Catalano (AUS). Some venues, like Jackson’s Lane in London, Espace Catastrophe in Belgium, and Chamaeleon in Berlin have taken on an important role of supporting creation processes and company development in circus; TOHU has done this for many years with Quebec companies especially.

How can we foster more creative producers for circus in the United States? Here are some suggestions:

Will the rise of the creative producer in United States circus mean that circus in that region will finally ‘make it’?

A thought from Ruth:

The ecosystem is too complex to name any one ingredient as a ‘magic potion’. Interest in circus is on the rise in the performing arts field (sign up for TOHU’sInternational Market for Contemporary Circus to witness this in action—July 6-9 in Montréal!). US circus artists are already leading, contributing to, and participating in successful touring work being made in cities and countries that have more favorable support systems for artistic creation—the same can be said of circus artists from Argentina, Colombia, Ethiopia, Guinea, and many other countries. Because contemporary circus hasn’t yet achieved the status among US funders and presenters that dance, music, and theatre enjoy, US-based circus artists and companies do well to look to those other disciplines for models for creation processes and support (particularly with devised work). Including the role of creative producers!

A thought from Adam:

If the success of touring companies from Australia and the United Kingdom in recent years is any indication, the United States is on the verge of seeing more American circus work on international stages. We are already seeing more companies tour domestically to theaters; it seems only a matter of time before more American work crosses borders.

That said, circus from the United States already has had massive cultural and artistic impact on circus arts all around the world. Artists from America have founded, directed for and performed in some of the most famous and influential contemporary circus companies in the world.

It would be great if more work could blossom here in the Unites States, but it would be a mistake to think that circus is the only performing art that suffers in the American ecosystem. The pipeline for the creation of circus work in this one sector, specifically touring in the Unites States, doesn’t work well yet–but we shouldn’t delegitimize the incredible work that American circus artists create all around the world and here at home just because it doesn’t receive funding or tour to theaters.

As circus advocates, we are thrilled that conferences like IPAY and APAP are highlighting the great work that contemporary circus is offering to the touring market. And, as discourse in the United States field develops and deepens around how circus can grow as a contemporary performing art form, we hope we’ll see more creative producers (and directors, and designers, and choreographers) accompany a host of mighty companies in making superb new work and bringing it to audiences around the world.

We want to close by praising the ways in which circus in the United States remains profoundly accessible; tents, city parks, circus schools reaching and empowering hundreds and thousands of youth. Yes, this art form has much to offer which remains undiscovered by theatre audiences. But especially in polarized times, circus’ existing grassroots reach is precious—a legacy worth legitimizing. Deputy Director of Programming -Canada
Ruth Wikler is Deputy Director of Programming, Circus Arts at TOHU in Montréal, Quebec, Canada, where she develops circus programming for TOHU’s annual performance season and summer Montréal Complètement Cirque Festival, and also directs the MICC (International Market for Contemporary Circus). Ruth is a graduate of Circomedia and a former contemporary circus director and producer. She has been curating theatre and performance for the past decade.
Adam Woolley Creative Outreach Director, Circus Coach -United States
Adam Woolley is the Creative Outreach Director for the Circadium School of Contemporary Circus in Philadelphia, PA. He's been a circus coach for the past 10 years, has served on the Board of Directors for the American Circus Educators Association, helped to produce contemporary circus showcases in NYC and Philadelphia and served as an advocate for the circus arts throughout his career.
You are about to enter a members-only zone.
To share this article on your CircusTalk member page and connect with circus professionals from all over the world, sign up now. It's free!
Sign Up
Already have an account?
Log in

Ruth Wikler is Deputy Director of Programming, Circus Arts at TOHU in Montréal, Quebec, Canada, where she develops circus programming for TOHU’s annual performance season and summer Montréal Complètement Cirque Festival, and also directs the MICC (International Market for Contemporary Circus). Ruth is a graduate of Circomedia and a former contemporary circus director and producer. She has been curating theatre and performance for the past decade.