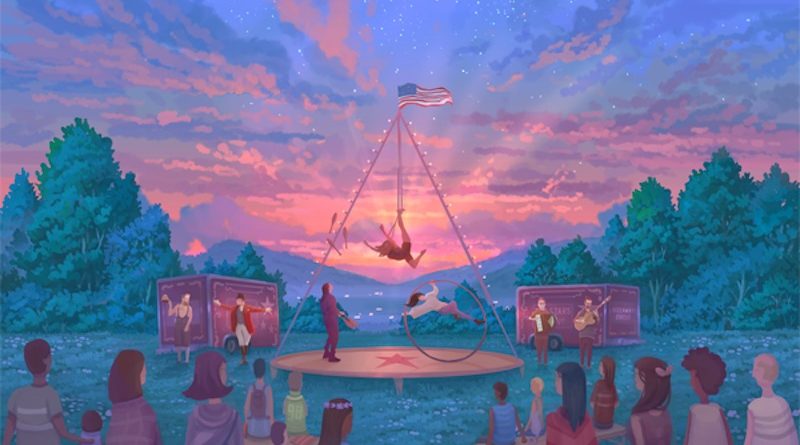 “We started developing the show concept for Stars Above a little over a year ago and collaborating with the composers, Book Kennison and Peter Bufano, to create original music for the production. This past winter we cast the circus artists and brought on the creative team, and to date, nearly all our pre-production meetings and rehearsals have been held virtually over Zoom. While we’ve been able to send act footage and design ideas back and forth digitally, we are tremendously excited to be heading to New England Center for Circus Arts in just a few weeks to build the show in person and take part in their company in residence program.”

(June 24, 2021 – New York) 2020 Drama Desk Award nominees Josh Aviner and Lyndsay Magid Aviner of Hideaway Circus are proud to announce the launch of Stars Above, a brand new, open-air circus touring the Northeast region of the U.S. this August and September. The Stars Above Northeast tour will make ten stops throughout Vermont, New Hampshire, Connecticut and Upstate New York, beginning with the premiere on August 13, 2021 in Brattleboro, VT. Tickets are on sale now at starsabovecircus.com.

A modern take on the nostalgia and intimacy of early nineteenth century touring circuses, Stars Above is centered around a single day in the life of a traveling family troupe. The production explores and celebrates our interwoven connections to loved ones, community, and what we’ve lost.

Stars Above combines elements of both contemporary and classical circus while showcasing an all-star cast of American circus performers and musicians, performing original music and reimagined covers. The all-ages production is performed outdoors, under the vast canopy of sky and stars, on a custom-built circular stage and aerial rig.

The cast of Stars Above is comprised entirely of American circus artists – a rarity in contemporary circus. In March 2020, many in the cast were forced to leave contracts with top international companies to return home to the United States. Pandemic travel restrictions created a unique opportunity to bring together some of the most talented circus artists of our time into a single company, spanning ages, genders, ethnicities, and backgrounds. The performers range from sixth-generation circus acts, with skills passed down through their families, to highly gifted individuals from the top circus schools in the world.

Stars Above is created by Drama Desk Award nominees Hideaway Circus, the team behind the underground hit Beyond Babel. A dance-theater riff on Shakespeare’s Romeo and Juliet set amid the present-day border crisis, Beyond Babel is scheduled to return to the Gym at Judson in New York City in September 2021.

Hideaway Circus is partnering with over a dozen local organizations to offer affordable tickets for individuals and families that have been hit hardest by the pandemic, so that everyone can share in the exhilaration, wonder and nostalgia when the Stars Above circus comes to their community. Please visit starsabovecircus.com for more information on the availability of free and low-cost options.

Book Kennison – Singing Ringmaster
Book is an audio and performance artist in Chicago, Illinois. A circus performer since childhood, he has decades of experience working in front of live audiences. He has performed with Ringling Brothers Barnum and Bailey Circus, Midnight Circus, Circus Flora, Circus Harmony, and Circus Smirkus. Since 2016, he has been immersed in music and audio, creating original compositions (Zobot, Book & Logan) and radio-style stories (“See U Down the Road”), as well as music to accompany live performances or be enjoyed on its own (“On Dropping,” “Sound & Juggling,” “Juggling Injuries”).

Delaney Bayles – Ball and Club Juggling
Delaney Bayles is an American juggler from Salt Lake City, Utah. Juggling historian David Cain has called her “the most technically gifted female toss juggler of all time.” In 2016, she won the World Juggling Federation Overall Championship. In 2020, she was voted the most popular juggler of the year in the Top 40 Jugglers list.

Lindsay Culbert-Olds – Aerial Straps
Lindsay grew up performing with Circus Smirkus and is a graduate from L’École Nationale de Cirque in Montreal, specializing in duo trapeze and aerial straps. She has toured internationally with Cirque Du Soleil, Cirque Eloise, and Circus Monti and is a regular artist in Chicago’s Midnight Circus.

Adam Kuchler – Clown
Originally from Milwaukee, Wisconsin, Adam followed in his uncle’s footsteps and became a clown. Since 1995, he has worked in 43 of the United States and 14 countries around the globe in circuses, variety theaters, parks, cruise ships, and once in a bullfighting ring. In 2012, Adam was honored to be awarded a special prize for clowning at the International Circus Festival in Figueres, Spain.

Summer Lacy – Aerial Chains
Summer Lacy is one of New York’s most sought-after performers and instructors. She was recently featured on “America’s Got Talent” and specializes in Aerial Chains, Aerial Hoop, and Silks. She has performed Off-Broadway in La Soiree and in the Circus Abyssinia show Ethiopian Dreams during its residency at the New Victory Theater.

Willem McGowan – Diabolo and Club Juggling
Willem grew up doing youth circus in Chicago, spent two summers on tour with Circus Smirkus, and is a graduate of L’Ecole de Cirque de Québec. His act won multiple awards at Young Stage Festival in 2019 and was touring in Switzerland with Circus Monti prior to the pandemic. He is co-founder of the juggling program Rog Academy.

Ottavio & Naomi Gesmundo – Crossbows and Whips
Ottavio is a sixth-generation circus performer and author of the memoir The Grand Gypsy. His wife and partner Naomi is a graduate of Royal Academy of Ballet in Amsterdam and specializes in classical ballet and folkloristic dance. Together they have performed in over 25 productions on Broadway and Las Vegas and specialize in daring crossbow stunts.

Alexandra Feit – Cyr Wheel
Scientist turned circus artist, Alexandra is a recent graduate of Circadium’s inaugural class. Her Cyr Wheel act has been featured at the Contemporary Circus and Immersive Arts Center and at the Philadelphia Fringe Festival. After graduating during a pandemic, Alex’s act will be premiered for an audience for the first time during the Stars Above tour.

Jacob Aviner – Multi-Instrumentalist Musician / Music Direction
Jacob Aviner is a composer, multi-instrumentalist, and educator living in Brooklyn, NY. He performs with and composes for his indie-fusion quartet, Porterfield, which has twice been nominated for the Boston Music Awards’ Jazz Artist of the Year. He is a graduate of Berklee College of Music and New York University’s Steinhardt School. He has toured with various ensembles in the U.S., both on the East Coast and in the Pacific Northwest, and performed in various venues in Spain.

Lydia is a Sailor Circus graduate currently based in Florida who was featured in the 2017 Smithsonian Folklife Festival. She is a Florida State University alumna and former member of the FSU Flying High Circus who received a degree in Media Communication Studies and Spanish. Her disciplines include trapeze, aerial silks, and Spanish web. Lydia is happily a part of the CircusTalk team as a journalism associate editor, combining her love for media and all things circus.